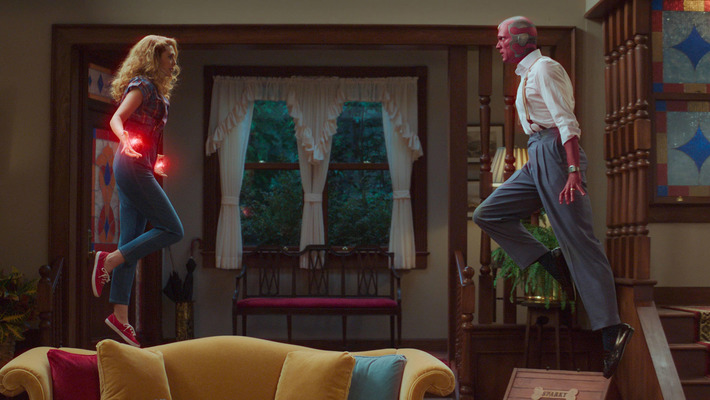 Feb. 11, 2021 — After WandaVision episode 5, Agent Jimmy Woo is gonna need a bigger whiteboard for all the new questions. Here’s a Q&A exploring those issues:

A: Because that’s what Wanda’s power was called when she was introduced in X-Men comics in 1964. Back then she could cause catastrophic accidents, or hexes, with a gesture. But Wanda grew in power and scope over the years to the Scarlet Witch of today, who can manipulate reality.

On the show, they explain it away by pointing out that Wanda’s power manifests itself in hexagonal shapes.

Q: Would a show starring Darcy and Agent Woo (Randall Park) be hilarious? 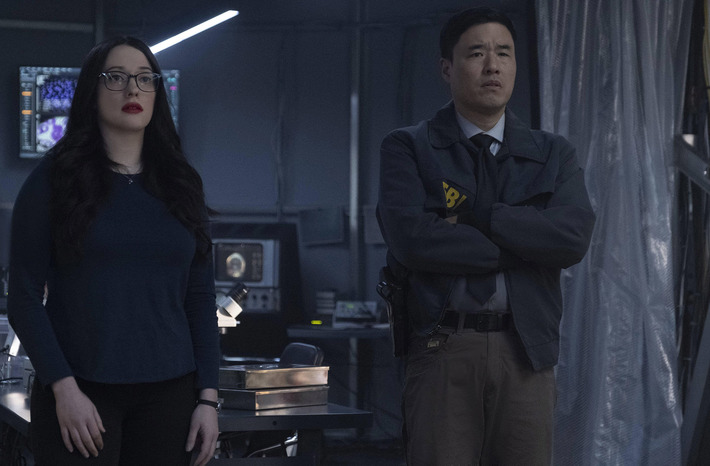 Darcy Lewis (Kat Dennings, left) is sarcastic and snarky. FBI Agent Jimmy Woo (Randall Park) is the kind of guy who exclaims “Jeepers Creepers!” without irony. Their scenes together on WandaVision are priceless. (Photo by Chuck Zlotnick. ©Marvel Studios 2021)

Q: Why isn’t Wanda called the Scarlet Witch on TV or in the movies?

A: Because originally Wanda and Pietro’s video life was co-owned by Fox, which had the film rights to the X-Men, and Marvel Studios, which had the film rights to the Avengers. I don’t know the details of the agreement, but I have to assume the split ownership is the reason why both studios avoided using “Scarlet Witch” for Wanda and “Quicksilver” for Pietro. Anyway, Marvel Studios now owns Fox and all its properties, so the point is moot, and I expect the “Scarlet Witch” moniker to make its debut in short order.

As all good Marvelites know, Monica is a superhero in the comics, currently going by the name Spectrum. (She’s also been called Daystar, The Lady of Light, Photon, Pulsar, Sun Goddess and, weirdly, Captain Marvel.) Her power is to transform into any energy found on the electromagnetic spectrum, so whatever her name, she’s a powerhouse.

We haven’t seen that on TV yet, but I did wonder when Monica was thrown through the “hex” bubble over Westview in episode 3 if I was witnessing an origin. Maybe so, because in episode 5, Monica’s X-rays keep coming back fogged. Dun dun dunnnnnn!

Q: Why wasn’t Pietro played by Aaron Taylor-Johnson in WandaVIsion, as he was in Avengers: Age of Ultron?

A: That’s a very good question, which raises many more.

As noted, the Pietro in the Marvel Cinematic Universe was played by Taylor-Johnson, who died in Age of Ultron. Another, wholly unrelated Pietro existed in Fox’s X-Men movies, due to the co-ownership mentioned above, played by Evan Peters. Since Wanda’s original Pietro is dead, somehow the living version we know about from an unrelated movie series was substituted instead. It’s as if Katniss Everdeen walked into Hogwarts and announced she was Harry Potter’s older sister Maddy.

And it’s not just a recast — both Vision (Paul Bettany) and Darcy failed to recognize this Pietro. But the audience did, and it’s a jaw-dropper. See, Marvel never could mention or use mutants, due to Fox owning the X-Men rights. The twins were mutants in the Fox movies, but as seen in Captain America: The Winter Soldier, the MCU versions of Wanda and Pietro got their powers from the Mind Stone. They weren’t mutants in the MCU, as there were none.

Until now. Pietro is not only a character from another universe, he’s the first mutant in the MCU.  Won’t the X-Men be close behind? Will all or part of the Fox movies become canon in the MCU? Will Wanda retroactively be revealed to be a mutant? Should we assume the barrier between realities is weaker in Westview, and we could see, say Electro (Jamie Foxx) from Amazing Spider-Man 2 or Dr. Octopus (Alfred Molina) from Spider-Man 2?

Oh wait, those characters are already present in the third Marvel/Sony Spider-Man movie, currently scheduled for a Dec. 17 premiere. Dr. Strange (Benedict Cumberbatch) is also guest starring in that movie, which currently has no name. Evidently, it’s going to be a sort of live-action Spider-Man: Into the Spider-Verse.

What does all this mean? It means that Marvel multiverse is upon us. WandaVision and the Spider-Man movie are all leading into the second Master of the Mystic Arts movie, Dr. Strange in the Multiverse of Madness, co-starring … Wanda Maximoff.

Q: Why does Pietro talk like Squiggy (David Lander) from “Laverne and Shirley”?

Q: Wait, why couldn’t Wanda resurrect her actual brother? She brought Vision back to life.

A: That’s another very good question, which we will have to wait for the show to reveal.

In “Special Episode,” Wanda explains to her boys that she can’t, in the words of one of the twins, “fix death.” So Sparky the dog remains dead.

But what about Vision? Well, that’s completely unexplained, especially as we see him briefly as he truly appears in another episode, as a grey-skinned, dead-eyed corpse with a hole in his head.

How is he walking around? Unexplained. And how does he have the Mind Stone in his forehead, when all the Infinity Stones have been destroyed? Also unexplained.

It might very well be connected to how Wanda’s powers have expanded exponentially from manipulating perceptions to changing matter — or as Darcy says, “wielding an insane amount of power.” That’s “far exceeding anything she’s displayed in the past,” says Agent Woo, and he’s absolutely right.

So where has this extra power come from? And why does Wanda not know how the Westview Anomaly got started? And, if she’s controlling everything, how come she can’t control the twins, when they refuse to sleep, or start growing without her permission?

Methinks there’s another villain behind the scenes, one supplying all this power, one we haven’t met yet. One who is manipulating Wanda, just as surely as she is puppeteering Westview.

Q: Could it be Tyler Hayward (Josh Stamberg)? He’s a nasty piece of work.

A: Could be. We’re clearly not supposed to like him, as Darcy calls him a name I can’t repeat. It may tie into why he’s “acting” director of S.W.O.R.D. (Who’s the actual director? Could it be someone we know? Like maybe Nick Fury, last seen building a space station in “Spider-Man: Far from Home”?)

Hayward also sneered that Wanda violated Vision’s living will by stealing his, uh, remaining pieces. The thing is, Hayward had already done so himself, by stealing and disassembling Vision, as we see in a flashback scene lifted almost intact from “West Coast Avengers” #43 (1989).

But Hayward seems like small potatoes. (He’s probably just another Hydra mole.) More likely our Big Bad is one of the major Marvel Universe players Wanda has ticked off in the comics. They include Mephisto (Marvel’s Satan substitute), Chthon (an evil Elder God of the H.P. Lovecraft variety), the High Evolutionary (a highly evolved scientist who enjoys playing God) or Immortus (a time traveler with an unhealthy fixation on Wanda).

Q: I can’t believe they killed Sparky! Was he a good boy?

A: He was a very good boy. Also, he wasn’t Vision’s first dog. The Android Avenger built a synthezoid dog in the 2016 “Vision” miniseries by Tom King and Gabriel Hernandez Walta. That dog was, interestingly, green, but, less interestingly, unnamed. I think we can all agree that Sparky is the perfect name for a robot dog.

A: Maybe. The name “Agnes” does look suspiciously like a portmanteau of “Agatha Harkness.” And she doesn’t exist on Jimmy Woo’s murder board of Westview residents. Further, she is present both times the boys grow older against Wanda’s wishes, the first time after sprinkling “lavender” on them.

I discount as a clue that she seems to know that she’s in a TV show, because it seems everyone in Westview does. They just have to continue acting like sitcom characters against their will. Which, as we see in the scene with Norm (Asif Ali), is really awful. Whether Agnes (Kathryn Hahn, center) is Agatha Harkness or not, her amazing performance as the generic “nosy next-door neighbor” character is one of the best parts of WandaVision. And yes, those clothes she, Vision (Paul Bettany, left) and Wanda (Elizabeth Olsen, right) have on are what people wore in the 1980s. (©Marvel Studios 2021)

Q: Who is the aerospace engineer Monica thinks is “up for the challenge” of infiltrating Westview?

A: The most famous aerospace engineer in the Marvel Universe is Reed Richards of the Fantastic Four. Could this show introduce both the X-Men [ital]and[end ital] the FF?

Those are just some of the questions one could ask about WandaVision. With apologies to Ricky Ricardo, Wanda’s got some ‘splainin’ to do!

A Very Special Episode prompted me to get Disney+. I've been devouring WandaVision since then.

Q: Would a show starring Darcy and Agent Woo (Randall Park) be hilarious?

I enjoyed Randall Park in all six seasons of Fresh off the Boat (2015-2020), available on Hulu, playing the father in a three-generation family that moved to the U.S. from Taiwan. He was a wonderfully quirky father (and son) in a wonderfully quirky show. I have been enjoying Kat Dennings as the charmingly vulgar Max Black in the charmingly vulgar comedy 2 Broke Girls (2011-2017), rerunning on TBS.

I would watch either or both of them do anything.