(The Fun of Old Ads)

You may have heard someone say that the best part of the SuperBowl is the ads.  I know I’ve said it before.  It’s not true, of course.  I’m partial to a good game myself.  But there is a kernel of truth in there, especially for people who attend SuperBowl parties primarily as social events.  It’s fun to check out the new ads, to acclaim the good ones and make fun of the bad ones.  The ads are part of the appeal. 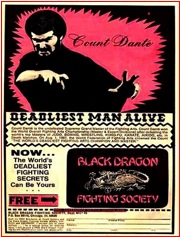 Old ads can be a cultural time capsule.  They can tell you what was popular at a given time.  (Although, in some cases, they only tell you what manufacturers and advertisers hoped would be popular.)  I find it fun to track the development of cultural trends and fads.  The sudden increase in ads for kung fu, karate and judo classes in the mid-70s is testament to the cultural influence of Bruce Lee.  In a way, the ads are a better witness than the comics that came out in the wake of Enter the Dragon.  Comics like Master of Kung Fu were trying to cash in on a trend.  The ads prove that the trend existed. 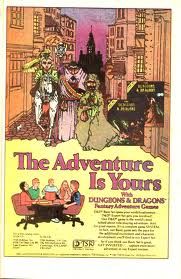 It’s fun to see the first ads for role-playing games like Dungeon & Dragons, Top Secret and Champions.  It seems hard to believe now but role-playing games were a new creation in the ‘70s and ‘80s and therefore a topic of cultural debate.  They were considered dangerous in some corners.  I know that my mom had a long talk with me about the dangers of Dungeons & Dragons, not knowing that I’d been playing spy games like Top Secret and James Bond with my cousin for years.  Looking back, those early ads show how harmless the games really were and how silly the whole debate really was.

I also enjoy seeing the explosion of ads for baseball cards in the early ‘90s, followed quickly by ads for basketball, football and hockey cards.  I know that the explosion of the speculator market essentially killed the sports card hobby industry- as it almost killed comics a few years later- yet I can’t help myself.  I smile whenever I see those ads.  I fondly remember the players and the cards themselves. 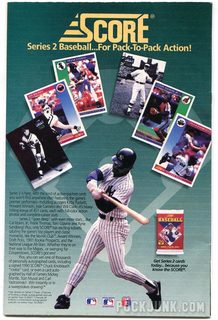 A huge cultural trend of the past 35 years is the growth and development of video games.  Video games have become a billion dollar industry, competing with movies for the top of the entertainment pyramid.  Comic book ads trace this development from early ads for Frogger and Q*Bert, to late ‘80s ads for Double Dragon and The Legend of Zelda, to today’s ads for mega-million dollar franchises like Final Fantasy and Halo.  I find it all fascinating.  The ads also evoke fond memories of playing videogames with my childhood and college-age friends. 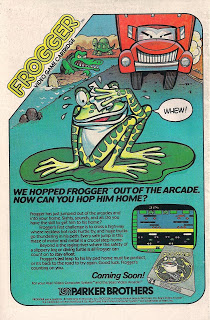 I get that same pleasant sensation of nostalgia when I come across ads for TV cartoons, movies and music.  Those ads shanghai me to a different time and place.  Comics used to feature double-page spreads for the new fall line-ups of Saturday morning cartoons.  Seeing those ads makes me feel like a kid again, more so than watching the actual cartoons which rarely hold up upon adult viewing.  Yet I fondly recall waking up early on a Saturday morning, pouring myself a bowl of “sugar cereal” (Fruit Loops or something similarly unhealthy that we weren’t allowed to eat the rest of the week) and camping out in front the TV for hours.  My brother and I would use those comic book ads to plot out our day- Fat Albert, Scooby Doo, Dungeons & Dragons and so on. 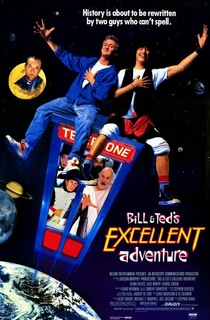 The ads for movies and music are more likely to transport me to my teenage years.  It’s a delight to come across ads for The Lost Boys, Bill & Ted’s Excellent Adventure, Hudson Hawk and Wayne’s World.  This may sound weird but it’s even fun to see ads for movies I’ve never watched as they at least feature the stars of my youth.  The music ads are just as delightful.  Discount wholesalers like BMG and Columbia Music Club used to take out double-page ads featuring dozens of artists, from INXS to REM.  During my recent reading, I’ve come across ads for bands that were formative influences like Nirvana or personal favorites like Spin Doctors.  The ads create a musical soundtrack for my reading, helping me mentally transport to a different time and place.

The ads also show the changing perception of comic books from a child’s medium to an adult one.  It seems like comic books grew up with me, advertising mostly toys and cartoons when I was a kid, then mostly movies and sneakers when I was a teen.  Of course, my perception might be misplaced- based more on the ads I remember than anything else- but it does seem like comic book ads have gradually but surely targeted older readers. 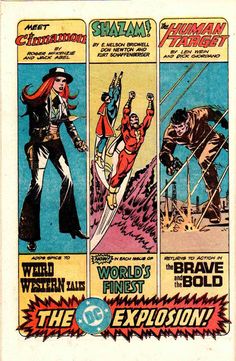 The best ads, however, are the house ads.  I am a comic book fan after all.  It is an absolute blast to see the old house ads.  One of the joys of a long-term reading project (like re-reading 50 years of Teen Titans) is watching the development of comic books over that time frame.  I’ve been treated to ads for the new look Wonder Woman and the return of the costumed Wonder Woman.  I enjoyed seeing ads for DC’s self-titled Explosion of the late ‘70s, especially for books that were never published due to DC’s unexpected Implosion.  It has been entertaining to see the evolution of crossovers through their ads, from Superman vs. Spider-Man to Crisis on Infinite Earths to Zero Hour.

The house ads of the early ‘90s have been a particular delight.  The succession of ads for The Death of Superman and Knightfall remind me how much I enjoyed those stories and stimulate me to read them again.  It’s pleasing to see ads for Mark Waid’s Flash and Kyle Rayner as Green Lantern.  I even enjoy seeing ads for series that I know aren’t any good.  I read the entire Darkstars series, and quickly sold it because it was awful, but dang if those Alan Davis ads for Darkstars don’t look great.  It’s wonderful to see the first ads for favorite series like Static and Starman.  I even enjoy the ads for subscription services and wholesalers since they feature large slates of new-at-the-time comics.  The ads remind me how much I enjoyed the comics of that age, even when I’m reading a title that doesn’t measure up to the best of them.