Marvel’s Agents of S.H.I.E.L.D. got off to a rocky start in its first season, for which some viewers have never forgiven it. But if they’re not watching this season, they’re missing some of the most compelling television around. Set alight the “Spoiler” beacon, because here we go:

Season 4 of Marvel Cinematic Universe’s only TV show launched spectacularly in September with the introduction of Ghost Rider. Sure, we’ve seen the character before in two mediocre films, both with Nicolas Cage, where the Spirit of Vengeance lived down to his billing as a character with a terrific look but no real story hook.

Ghost Rider has had a number of iterations in the comics. S.H.I.E.L.D. made use of that by using one of the lesser-known, but more interesting, versions: Robbie Reyes, from the barrios of Los Angeles. The Nicolas Cage version of the character fired up a motorcycle (literally), because the host was cycle stuntman Johnny Blaze. The Robbie Reyes G.R., however, came from low-rider culture – and set ablaze a mighty muscle car.

Ghost Rider was the star of sorts for the first third of this season, before appearing to die in the eighth episode, “The Laws of Inferno Dynamics.” This was done, according to the producers in an interview on tvline.com, due to “financial considerations.”

Turns out having an actor’s head explode into flames and melt off his flesh and muscle several times an episode was a tad on the expensive side.

But, one must admit (again): very cool.

Story-wise, it’s unlikely the Spirit of Vengeance is gone for good. I mean, c’mon: He’s escaped worse than death before! And more importantly, the Ghost Rider sequence produced “The Darkhold,” an ancient book of powerful magic along the lines of H.P. Lovecraft’s “Necronomicon” or  Dr. Strange’s “Book of the Vishanti” as a terrifying tome not to be messed with.

But mess with it our cast does, enabling two characters to make a breakthrough in artificial intelligence. Dr. Holden Radcliffe (John Hannah) creates Life Model Decoys (LMDs), androids that perfectly mimic human beings, complete with memories and emotional reactions. Which led Agent Alphonso “Mack” Mackenzie (Henry Simmons) and half the audience to exclaim: “What’s the matter with you two chuckleheads? Have either one of you seen a movies for the last 30 years? The robots always attack!”

And, of course, he was right. I mean, we’ve all seen Terminator! Plus dozens of Marvel Comics where LMDs replace various important characters, including the miniseries “Nick Fury vs. S.H.I.E.L.D.,” where LMDs replaced the spy agency’s top agents and set everyone against the still-human Fury, telling everyone he’s a malfunctioning LMD.

Sounds like a pretty good plot, doesn’t it? ABC must have thought so!

Because sure enough, before the second set of (seven) episodes is over, LMDs have replaced five of S.H.I.E.L.D.’s top seven agents. And in the seventh episode, “Self Control,” the robots set the rest of S.H.I.E.L.D. after the last two, convincing everyone that the two human agents are the actual LMDs.

But they don’t want them dead. Like some sort of robot zombies, the LMDs want the last two agents’ brains. “Shoot to maim … stomach, spine,” robot-Mace says. “It’s imperative we pull  the data from their heads.”

Nice. But here’s the thing: The above plot is enough for a TV show. But Agents of S.H.I.E.L.D. added a few extra twists that elevate this sequence far above its source material.

For example, the LMDs don’t kill the humans they replace. Instead, they are plugged into a Matrix-like computer called “The Framework.” And just like in that Sci-Fi movie series, the humans are unaware that they’re living lives in a simulation programmed down to the tiniest detail to be convincing and satisfying. 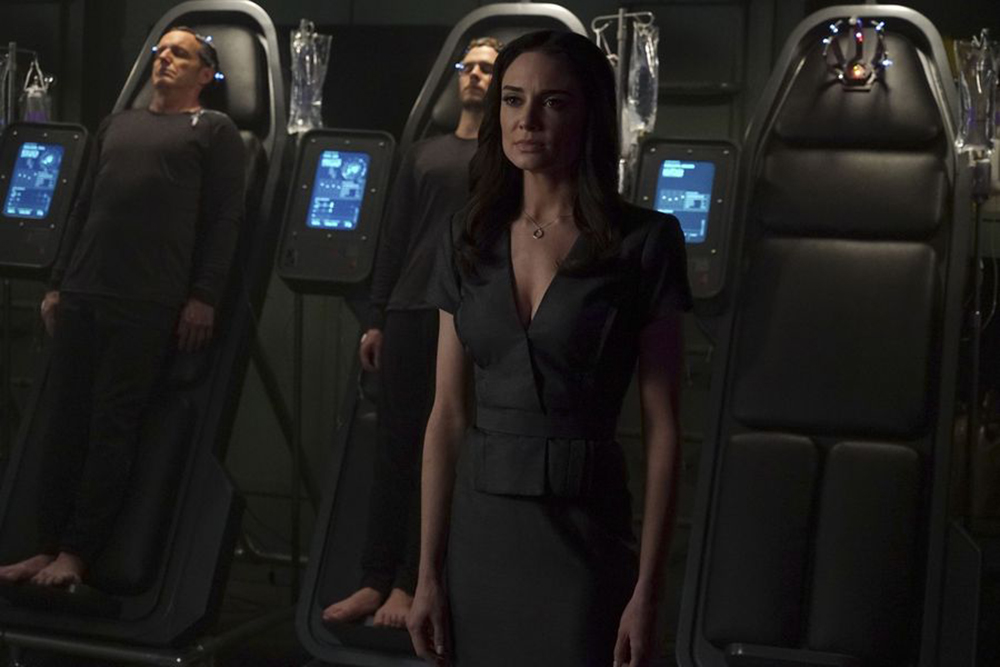 “I am saving these people,” says Radcliffe, one of The Framework’s creators. “I’m giving them a replica of their life with less pain.” Although the process kills the body, Radcliffe doesn’t think that matters. “Reality is just perception. They perceive it as real, which makes it real.”

In other words, Radcliffe is offering life after death, where you can “live” as long as you like in a state of perfect bliss. Isn’t that … well, isn’t what a lot of religions describe as heaven? Will our heroes – should our heroes – turn that down?

So S.H.I.E.L.D. has added a philosophical angle to the meat-and-potatoes of agents vs. robots in F/X-filled combat. And don’t forget: The robots have opinions too.

“What did you do?” robot-Coulson asks robot-May in an important scene. “What I wanted to do,” she responds. Which is not a very robot-like thing to say.

Then there’s the third angle: the human one. Frankly, the acting in this sequence, especially in the climactic “Self Control,” is what brings home all the sturm und drang.

Agent Daisy Johnson (Chloe Bennet), for example, stumbles onto what one of the robots refers to as “the Daisy fleet” – a room full of LMDs that look exactly like her. That’ll put you off your feed.

But the award for best supporting actress must go to Elizabeth Henstridge, who plays Agent Jemma Simmons. In a single episode she must kill a robot that looks like the man she loves (or is he?), deal with the uncertainty of whether she herself is a robot, and argue with at least two other characters about who is human – if either of them are. “There’s no way to tell until they kill you,” she sobs hysterically.

Her complete breakdown in this episode is so convincing, even Agent Johnson is put off. “Prove to me you’re not a friggin’ robot,” she says, “because it looks like you’re malfunctioning.”

Which also gives a taste of the crackling dialogue throughout. For example:

“So, we fight our way through the trained military personnel,” Simmons says, “then the ultra-powerful android doubles of our friends, somehow make it to the Zephyr, which we can’t fly, to escape the base and try to plug our minds into an alternate reality.”

“OK, well, don’t say it out loud,” Johnson replies, “because that made it sound way worse.” 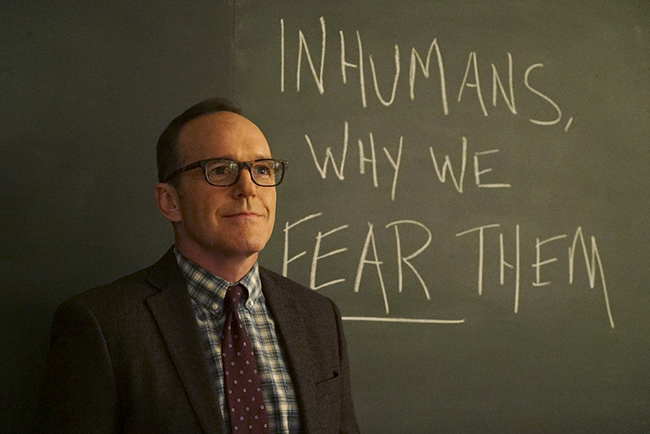 In the perfect world created by “The Framework” in Marvel's Agents of S.H.I.E.L.D., Phil Coulson (Clark Gregg) is a teacher.

That brings us to the last seven episodes of this season, which will begin April 4.

As we see in the previews, the first of the seven remaining episodes will begin with all our major characters plugged into The Framework. It’s supposed to be their heaven, or at least a life with their greatest regrets scrubbed out. Some arrangements seem obvious, like Coulson as a teacher, and Mack living with his daughter, who in this simulation hasn’t died.

But some promise some top-flight weirdness. We see Jemma’s headstone. Fitz (Iain De Caestecker) appears to be living like Tony Stark. Agent Johnson wakes up with her boyfriend who is, to her surprise (and ours), the traitorous Agent Ward (Brett Dalton), instead of the man she thought she loved. And is that Melinda May … as an agent of Hydra? 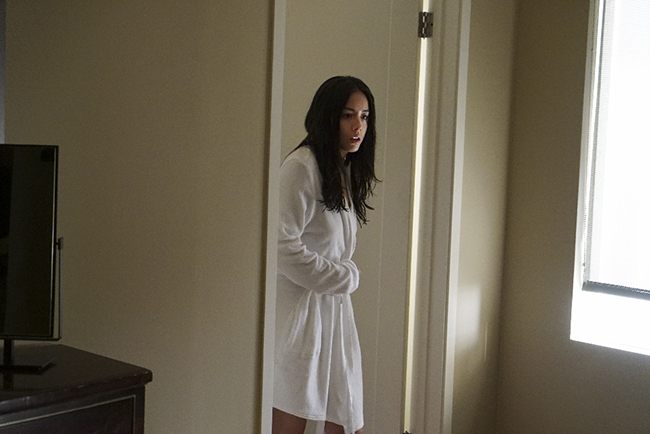 Daisy Johnson (Chloe Bennet) finally gets to wear something besides black leather in the fantasy world of “The Framework” on Marvel’s Agents of S.H.I.E.L.D.

Welcome to The Framework. Don’t worry, you won’t get hurt … unless you resist.

Agents of SHIELD returns on Friday, May 10.