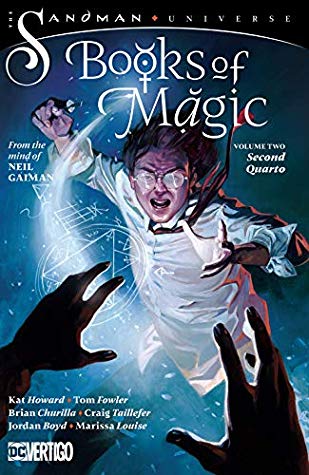 The collection opens with two detectives investigating Ellie's disappearance and teacher Bartholomew Brisby's murder. They find the coincidence of both happening at the same school hard to believe, and Timothy Hunter's name keeps coming up. Meanwhile, Tim and Rose seek Ellie, going through multiple magic doors. They get diverted to Faerie (a familiar story element in the Sandman Universe). Tim does not remember being there before, but Queen Titania certainly remembers him. Tim asks for his memories back, which include a murder he committed, as well as the fact that he was supposed to be searching for Ellie (which the joys of Faerie had distracted him from).

Ellie has been trapped inside a magical book, which has caused her to seriously reconsider her fascination with magic.  She manages to escape due to her own courage and initiative, which is a narrative hiccup. Rose and Tim were to be sent to where Ellie is, but we just see Ellie and Tim returning home separately. I thought it was implied that Ellie would be getting help, but all's well that ends well, I suppose. The police question both of them about their disappearances, but they manage to get by without mentioning magic.

Tim's mother returns home, after being gone for some time. Tim and his dad both thought she had abandoned them, but it's a joyful reunion. She claims to have been taken by the Cold Flame. After making Tim promise to stop doing magic, she surprises him by asking about the books of magic. But a confrontation with her--in which she reveals that she came back to retrieve the books--followed by walking in on a magical battle between Cold Flame member Mr. Davies and Rose, causes him to break his promise.

The two detectives call on a colleague named Celia who specializes in cases involving magic, bringing a new actor into the story. She knows about Tim's fate to destroy the world with magic--a factor in all of the previous series--as does practically everyone but Tim, apparently (Rose, Titania, and Mad Hettie have all referred to it). It also seems to be common knowledge that Rose's agenda includes stopping him in whatever way necessary: she is far from a friendly ally. The final scenes show a dark, evil version of Tim emerging from a magical black ooze (perhaps left behind when Tim killed Mr. Davies?). Things appear to be taking an even darker turn.