There has been much media buzz about this: 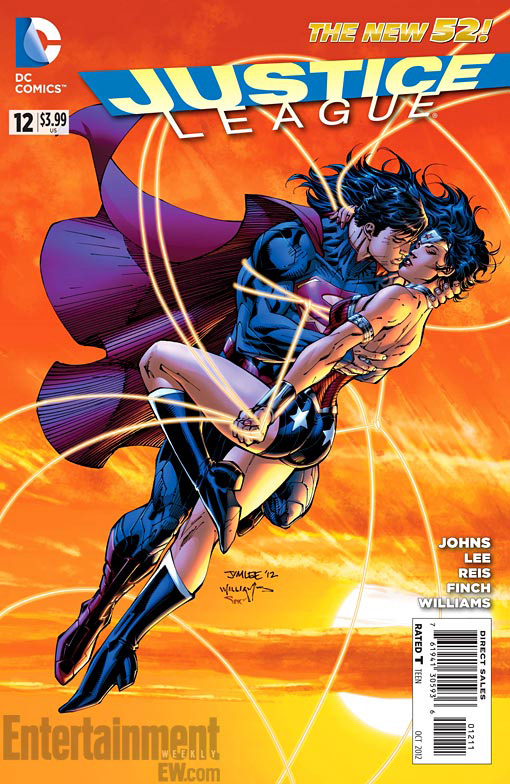 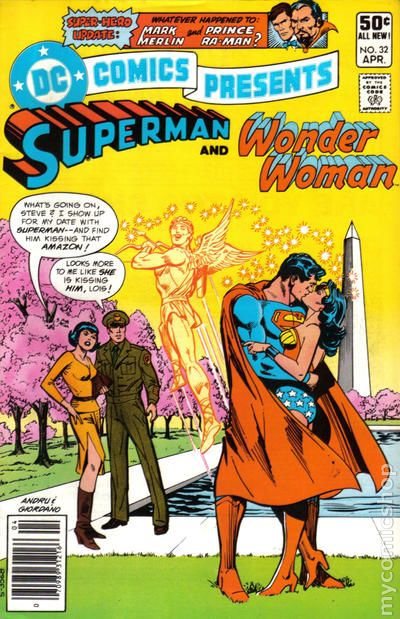 And that's what I'm going to talk about!

DC Comics Presents #32 (Ap'81)--The Super-Prisoners of Love! by Gerry Conway, Kurt Schaffenberger and Vince Colletta and edited by Julius Schwartz. With that cover date it may have been on the newsstands by Valentine's Day!

It begins with Wonder Woman, on monitor duty aboard the Justice League Satellite, bored out of her beautiful mind! She even slightly regrets rejoining the team. She is suddenly confronted by Eros, the God of Love, not as a cute though creepy cherub but as a handsome young man. He proclaims his overwhelming love for Our Amazon Princess, complete with liplock, apparently forgetting his marriage to Psyche, for the Greek myth fans out there. Diana rejects him because of her love for Colonel Steve Trevor, that gods are fickle in romance and because he's still a bit creepy! His passion and anger causes him to become a giant (Shades of Star Trek!) and he's about to shoot one of his legendary and chaos causing arrows (just ask Daffy Duck!) when, at that moment, Superman teleports up at the wrong moment, but the right one to have a story!

The Scorned Scion of Aphrodite shoots both of them with his love-arrows and vanishes, laughing. And the two longtime teammates gaze into each others' eyes and melt into a passionate embrace. But they realize that their feelings have been altered and attempt to stay away from each other! On Olympus, Eros, now the God of Voyeurs, watches his vengeance in a magic fountain and his mother, Aphrodite, almost catches him in the act!

Meanwhile Superman and Wonder Woman try to find a cure for their attraction, accidently touching hands which drives the Man of Steel to hurl himself away OUT of the Satellite in frustration! He comes to his senses immediately and fixes the hole he made but Diana had already left. She flies off in her invisible jet to Washington DC to see Steve and embraces him. However Superman had the same idea by going to Metropolis to smooch with Lois Lane and that was televised by Lana Lang. So the Amazing Amazon sees it and charges off in a jealous rage, leaving behind a confused Steve Trevor. She attacks Lois and tries to kill her but Superman saves her, naturally. But when Lois recovers, she and Lana are shocked to see Superman and Wonder Woman kissing, then the two fly off to "take care of some business!" The Romantic Rivals are stunned because they're afraid that it finally happened; "that Superman may just be in love with the one woman they've known, deep in their hearts, was ideal for him!"

Back on Olympus, Eros is furious because the two have disappeared, only to reappear behind him! Superman knows enough about dimension hopping to find the home of the Greco-Roman gods. Now Eros must face an angry Man of Steel and does what any immortal deity does: he calls for his mother!! Aphrodite saves him, and not for the first time it seems, then tells them how to break Eros' spell. The Enchanted Allies fly off to find the Blue Lotus of Lost Love but briefly have second thoughts if they want to not be in love. Luckily a lightning bolt clears their senses as they reach the cavern of the Lotus. Even in Olympus, every cave that Superman enters seems to contain lead! What are the odds!

Suddenly a Minotaur attacks but is quickly vanquished. The two combine their strengths to pull the magical bloom free and its scent frees them from their unwanted desire.

Afterwards, they explain things to Lois and Steve (who really should be BFFs for all their similar experiences) but decline to ride through the Tunnel of Love! *groan*

This is a neat though silly "Done-In-One" story that focuses on the not-unusual question of "Why aren't Superman and Wonder Woman a couple?" They are allies, comrades and friends. They respect each other and their need to complete the own missions, have their own lives. Both need to the rescuer, the champion. Diana does not want to be dominated by a powerful man and Superman does not really want a partner who does not need him.

Also there's Eros' original plan to shoot Wonder Woman solo and have her fall in love with him! That's very similar to Avengers #200 and we all know how well-thought of that book is! Now granted Aphrodite would have put a stop to his fantasy but after how long??

To Dave, Hoy and Mister Silver Age: I would be remissed if I did not mention that the back-up featured "Whatever Happened To... Mark Merlin and PRINCE RA-MAN!!" It was my first time reading about the Mind-Master and, although, it was a neat tale, I must admit that the Prince was decidingly mediocre.

But in any relationship, there are always rough spots and squabbles!

Commander Benson wrote a column on Mark Merlin and Prince Ra-Man here. I like Mark Merlin stories, mainly because the long-time artist on the series was Mort Meskin, who I've learned to appreciate. I've not read a Prince Ra-Man one.

Of course, DC once tried to pair Superman with Batgirl.

He may have enjoyed some domination but he had his problems with Lois!

As for Prince Ra-Man, regardless what you or I may think of him, he was technically eligible to join the Justice League while his feature ran briefly. At least he would have brought facial hair into the JLA years before Green Arrow!

I thought that Catherine Zeta-Jones would have made an incredible Wonder Woman ten years ago.

Interestingly, Eros would eventually get involved with Wonder Woman between the death of "Steve Howard" and Crisis.  It is a complicated story that doesn't make too much sense.

Nobody's addressed the question I have with this: What does a Superman-Wonder Woman romance mean for Clark Kent and Lois Lane?

What does your romance with your wife mean to the woman 3 desks down where you work?

They are just work colleagues these days.

Yes, the DCnU directive is that Superman and/or Clark were never romantically linked with Lois Lane and NEVER WILL BE (pinky-swear-they mean it this time!) I don't know if they told the producers of the new Superman movie that yet!

I can only hope it will mean some interesting stories.

Naturally, I don't buy for a minute that Clark and Lois won't ever be together. But I do think that DC is aware they have a window to tell some stories that they can't once they do get together, and are taking the opportunity to do it now, because the chance is unlikely to come around again for a while.