Fan of Bronze: "Wait 'Til They Get a Load of Me!"---The Corruption of the JOKER!

The Joker, the Clown Prince of Crime, the Grinning Ghoul, the Harlequin of Hate has been the Batman's inescapable nemesis since 1940. Despite his infamy, he is one of DC's most recognizable and profitable characters starring or co-starring in four major motion pictures and earning two of his portrayers Academy Awards! While other villains would cool off or not be seen for a few years, the Joker never went away. He would bedevil the Dynamic Duo in numerous tales each decade, including the 1960s with its combo sci-fi/New Look/TV show Camp periods. Even though Cesar Romero gave a memorable and manic performance as the TV Joker, he was more a nuisance than a menace, more trickster than threat and more spoiled child than public enemy.

Appearances on Batman's Saturday morning cartoon, meeting Scooby-Doo and being used to teach traffic safety on Sesame Street greatly diminished his evil persona. In fact, he would be in disguise for the entire issue of Justice League Of America #77 (D'69), unrevealed until the end in what was perhaps his most consequential crime as he tainted the JLA's honorary member, Snapper Carr, and forced the team to abandon their longtime Secret Sanctuary!

The 1970s would be a time of reconstructing the Joker and would push him to greater heights and greater lows as the decade would pass.

But first, it began with a radio broadcast or a nineteenth century book...

Next: Yesterday's Clown or Glad I'm Done with Him! I'm not going to cover the Joker's Golden and Silver Age appearances unless you guys want to.

But quickly, the Joker first appeared in Batman #1 (Spring 1940) and his true genesis is lost in time as Bob Kane, Bill Finger and Jerry Robinson all claim to have created the Jeering Jester, inspired either by a playing card or the visual of actor CONRAD VEIDT from the 1928 film The Man Who Laughs based on Victor Hugo's 1869 novel L' Homme qui rit. In his debut, the Joker has apparently been around for awhile and was even arrested once. He announces his crimes in advance via the radio and dares the police to stop him. They can't as the Joker stacks the deck in his favor and cheats.

He seems to obsessed with precious, rare and famous gems and vows to kill their owners. Contrary to popular opinion, the Joker's face was NOT frozen with a grin in those early days and he usually looked quite dour until thinking about a grisly murder! Observe Panel 6: if printed without color, the Joker could be mistaken for Sherlock Holmes! 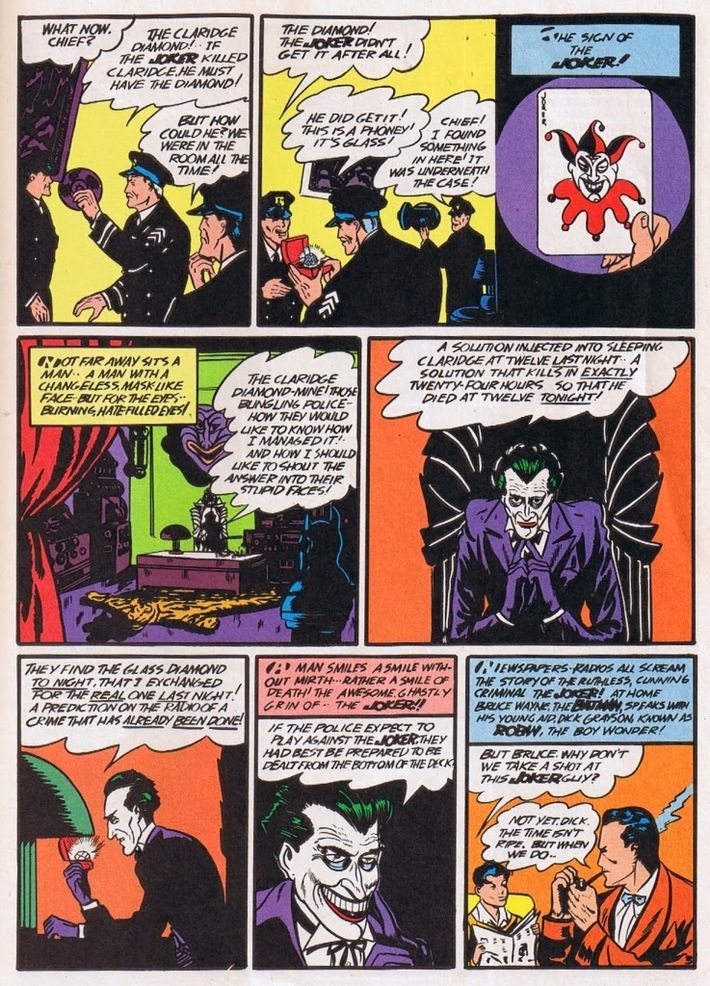 Then there's the Joker's first encounter with Batman, "You! Prepare to die!" There's no gamesmanship, no cat-and-mouse, no battle of wits. The Joker wants Batman and Robin dead. Period. The Joker lacks any zaniness, charm or charisma. He is simply a murdering villain that must be stopped. Indeed, the Joker appeared in the first and last story of Batman #1 and was supposed to die at the end of it, like all early Golden Age villains usually did, much like Dick Tracy's foes did. However editor Whitney Ellsworth thought that the Joker had potential and gave him a reprieve. This protection is still in effect today! 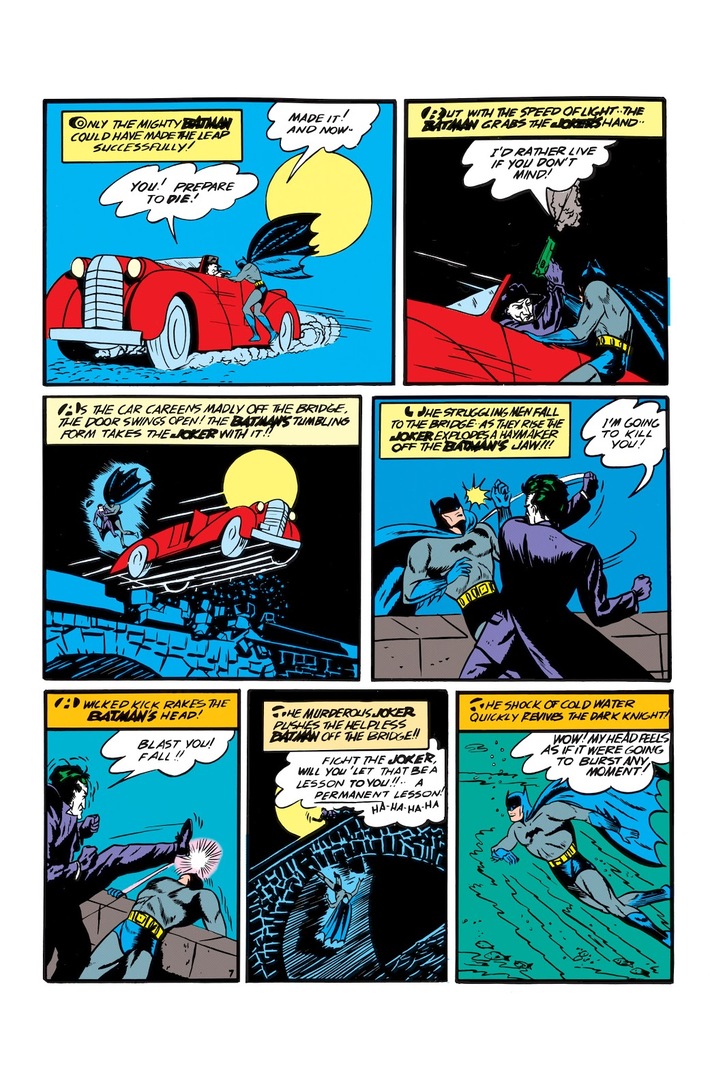 Next: Five in the Hand or That's No Boating Accident! Prior to the seminal Batman #251 (S'73), aside from reprints and cartoons, the Joker had last appeared in Justice League of America #77 (D'69) and his final Silver Age solo battle against the Dark Knight was in Detective Comics #388 (Ju'69). It took four years for a rematch, an eternity as far as Joker clashes go! In the fallout after the TV show ended, there was a concentrated effort to rid Batman of all his campy entrapments like Robin, Batgirl and his colorful enemies.

The early 70s brought new foes like Man-Bat, R'as Al Ghul, the Ten-Eyed Man (they can't ALL be winners!) and the return of Two-Face, a classic villain untainted by the Camp Era. Denny O'Neil and Neal Adams were in the midst of their epic collaboration and reinvention of "The" Batman and they turned their attention to the Clown Prince of Crime in "The Joker's Five-Way Revenge!" Instead of the usual prison break, the Grinning Ghoul had escaped from "the state hospital for the criminally insane", a nascent incarnation of Arkham Asylum and would forever portray the Joker as a murderous madman, not an eccentric criminal mastermind.

Determined to punish the one of his five former henchmen who had betrayed him, the Joker is out to kill all of them to be sure! And he is very successful, terminating four in a row with Batman seemingly unable to stop him! Once more leaving his "Joker" playing card and leaving his victims with gruesome death-smiles with his Joker-toxin, he is "born again" to his Golden Age viciousness. There was no reason given for it; the Joker kills and has always killed. His Silver Age frivolity has vanished in the cold light of "relevance", a maturation of an industry.

His first two victims die from his Joker-toxin, the third from an exploding cigar but the fourth is stalked and brutally hanged, a more obvious departure from the past. The fifth, now elderly, is thrown along with Batman into a shark death trap that's pre-Jaws.

Adams tried to modernize the Joker's outfit, no longer wearing a garish zoot suit but a solid purple "current" suit but it didn't take.

The Joker speaks of his war with Batman as logic versus madness and wants his demise yet only on his terms. They are destined to be linked forever and the Joker likes it! This issue would be the template for all future Joker appearances but the next one wouldn't be by O'Neil or Adams!

Next: What's This? or B & B Working Together!

Somehow, when I read Batman 251 in 1973, I don't remember picking up on this "new" emphasis on Joker's murderous activities or his residence in what would become Arkham instead of regular prison. I think by then I was pleased with their efforts to get away from the "camp" era, to the extent it bled over from the TV show.

Maybe, pre-Jaws, O'Neil was inspired by the second James Bond novel, Live and Let Die, in which Felix Leiter was fed to a shark and maimed for life. A Joker-ish note was left that said "He disagreed with something that ate him."