From Bluebeard to Wonder Woman, some of the best YA graphic novels

July 9, 2020 — The popularity of Young Adult graphic novels has exploded, along with their shelf space in bookstores and comic shops. Here are some of the latest: I vaguely remember this classic fairy tale from my youth as being creepy with lots of spooky foreshadowing and a dark, dark heart. Good news! This version not only keeps all of that, but does it very well!

Bluebeard is by Metaphrog, the professional name of French artist Sandra Marrs and Scottish writer John Chalmers, who previously impressed me with a collection of fairy tales titled The Red Shoes and Other Tales, partly because where the story went dark they were unafraid and confident of following through to the shocking end.

Don’t let that scare you off, though. Virtually every fairy tale has some element of terror, as their purpose is to teach children how to deal with such things. And Marrs’ dreamy, retro art softens the hard edges of the story.

The press material quotes Metaphrog jointly calling this story “a feminist retelling.” Honestly, I didn’t feel that way at all, although I wouldn’t have necessarily minded. A lot of fairy tales are told from the point of view of the central female protagonist, who often has agency and courage. That is the case here with the narrator, Eve, who is the latest bride of the notorious and dangerous Bluebeard. Besides, her boyfriend and two brothers are deeply involved as well, and show just as many good qualities as Eve.

The upshot is that, while I’m long past being a Young Adult, I thoroughly enjoyed “Bluebeard,” as I suspect will be true for readers of all ages. 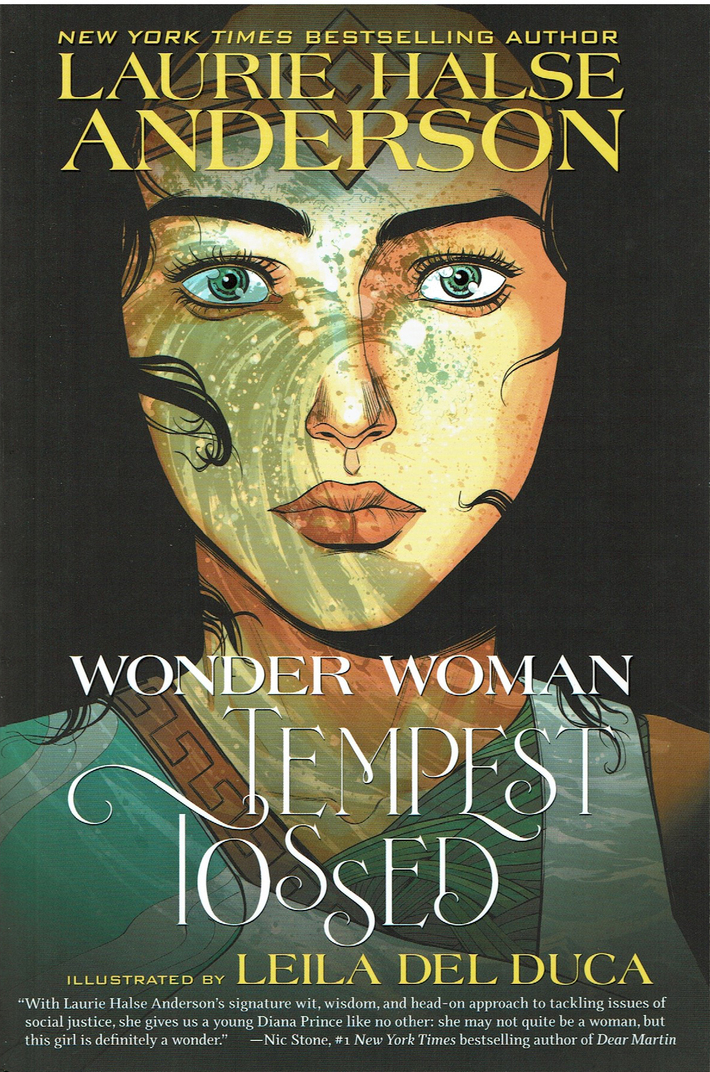 Wonder Woman: Tempest Tossed cover: This graphic novel varies from all other Wonder Woman origins by sending her to “man’s world” by accident on her sixteenth birthday. (Cover art by Leila del Duca, copyright DC Comics)

Comics readers have long been accustomed to seeing their favorite characters presented with a variety of origins, or having different histories on different parallel worlds, or being rebooted to have their “official” backstory competely re-written. Given today’s movies and TV shows — many of which adapt this cornucopia of interpretations — it seems likely these concepts are achieving broad recognition and acceptance.

If not, Tempest Tossed is going to be confusing for those whose entire experience with Wonder Woman is the recent movie. Because in this story, Diana’s introduction to “man’s world” is not only different from the movie in every particular, but also from the ‘70s TV show and any era of the character’s long run in comic books. It is unique.

It also very modern, with non-binary and non-white characters at the forefront. And feminism as well. That’s not only what is expected of today’s books — reflecting as it does the world around us — but also what should be expected of a Wonder Woman story. After all, inclusiveness and feminism have been part of the strip’s themes and philosophy since WW debuted in the early ‘40s.

Tempest Tossed takes place on Diana’s sixteenth birthday, where she hopes to become a full-fledged Amazon. Another hope, and perhaps a stronger one, is this milestone will bring to an end the physical changes she’s experienced for the last few years, considered bizarre on an island of immortal women who are completely unfamiliar with the concept of puberty.

Unfortunately, the magic protections surrounding Themyscira —imaginatively re-imagined, I should note — are failing. That allows the residents to come into contact with a sinking ship and its flailing survivors. The Amazons resist any contact, but Diana literally dives in, trying to save whomever she can.

Unfortunately, the door closes behind her. So Diana is thrust into man’s world, with only a few well-defined companions, all human, beside her. Joining the usual set of problems Wonder Woman has traditionally learned about in man’s world — war, patriarchy, crime — are modern issues such as immigration, refugee camps, gentrification, poverty, trafficking and the prison system. Blue Road bills itself as a “fable of migration,” and the lead character does, in fact, migrate from her magical homeland to a far city with a foreign culture. She  makes it there through courage and daring, and survives there by imagination and industry. That is the through-story of this graphic novel, making it well worth the read for the surreal journey and hopeful lesson it offers.

But some of the metaphor baffles me. I understand the “Thicket of Tickets” as a condemnation of bureaucracy. The nonsensical rules of the guard at the Rainbow Border also jump out as representative of the impossible system so many immigrants face. And the cruel requirement in the Northern Kingdom that immigrants can only look at the world through a mirror is not only a great problem for our heroine to cleverly surmount, but a powerful metaphor.

But a lot of Blue Road doesn’t seem to have much to do with the central migration concept so much as writer Wayde Compton and illustrator April Dela Noche Milne having fun. And since they’re having fun with the Swamp of Ink, the Willow the Wisp and the festival of Aurora Borealis, the reader can, too.

Unless they are part of the metaphor, and I just don’t get it. Maybe you will, if you read this cleverly written and beautifully illustrated tale. Just don’t ask me to explain it all. Attack of the Stuff cover: The stuff doesn’t attack our hero so much as it complains to him. A lot. (Cover art by Jim Benton, courtesy Papercutz)

Stuff stars a Bill Waddle, who is a duck, but doesn’t look much like one. In fact, all the characters are anthropomorphized animals whose provenance I can mostly only guess at.

Nevertheless, the story was so clever that I began to forget my irritation with the art. It stars a character who, despite the title, does not battle “stuff” so much as he hears it talking. The stuff in question is virtually everything, from his toilet (which wants to be a movie star), to his alarm clock (which is annoyed by Bill’s snoring), to somebody else’s toilet (which wants a hat), and so forth.

Yes, everything can talk. And it’s all complaining.

Meanwhile, Bill has some adventures with a giant cup of orange juice, some snakes and a guy who accidentally swallows his mustache. (It’s OK, as he made it out of cotton candy.) And then comes the moment where Bill shines: The Internet is down, forever, and no one knows why. No one but Bill, who can hear it talk.

I won’t spoil the ending, but it’s clever and amusing. The story’s pace and structure is smooth and pleasant. In fact, everything about Stuff is pretty fun.

Jim Benton does a comic strip, which I believe is online-only, called, well, Jim Benton Cartoons. The art is as simple as you say but the subject matter is challenging. Sometimes it's a single panel and sometimes it's up to four panels. I find it enjoyable. It's can be found at