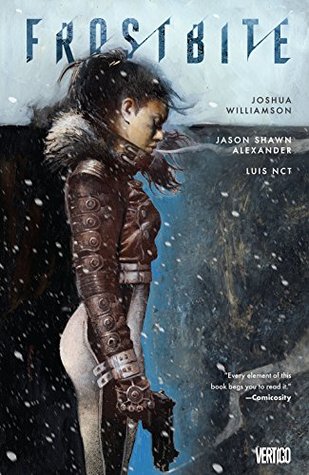 Frostbite is set in a frozen future dystopia ("Fifty-seven years into the new Ice Age"). The setting certainly isn't unique--Snowpiercer immediately comes to mind--but the title disease is. This is not your garden-variety frostbite: it is a plague that freezes its victims from the inside out, and there is no vaccine or cure.  Or maybe that is about to change: Keaton and the crew of her cross-country cargo hauler Icebreaker have been hired to transport Dr. Henry Bonham and his daughter, Victoria, 2,000 treacherous miles from snowbound Mexico City to a secret government installation on Alcatraz Island, where they can complete a theoretical cure.

They are not the only players. Before they can even finish preparations for the trip they come under attack by a group of Fuego's men. Fuego is a rich, powerful gangster, and he has a personal motivation: he has been stricken by frostbite. Travelling to Alcatraz becomes a saga: first Keaton's group is attacked by a couple of Mad Max style extremist cults, then Fuego's vehicle (ironically named the Titanic) swoops in. Lots of action, and an especially complex relationship between Keaton and Victoria. After the cure is developed, it turns out to be too late for the severely afflicted. Keaton goes into the world to distribute it for free. And in the final frame Fuego (whose disease has mutated into something other than frostbite) vows to go out and find the elusive Keaton. In other times that could set up a sequel, which now appears unlikely.

Jason Shawn Alexander has a loose, impressionistic style that works well for this story. He even makes the snow scenes work, aided by imaginative coloring by Louis Nct. The collection closes with a collection of their covers, in full size.