It would depend on how close to the deadline they got the word of new episodes. In the past I've seen shows have little miniseries of a few episodes in the middle of long storylines, probably for the same reason. Making sure they didn't disagree with already established continuity might have been more than they wanted to deal with when they thought the show was over. Quite a few writers have added stories to Spider-Man's early days, and some of them have impacted Lee/Ditko stories. (Of course one Ditko issue was rewritten so that it actually starred Deadpool not Spider-Man, but that's another story.)

I've read that when they decided to have Secret Wars run nine instead of eight issues that #8 was padded and part of it moved to #9. If true then it isn't just television doing this. 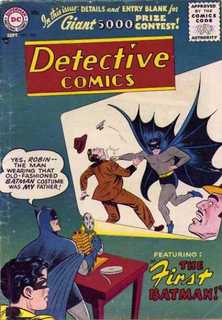 "Padded" is a loaded term, connoting wasted time. In a comics miniseries or short-run TV show, I can see that adding more space suddenly changes the pacing or the story's intent. In an episodic TV show with an overarching story arc of some kind, it doesn't seem that difficult to add in some more short-term adventures.

All those shows have episodes where the bigger story is barely addressed and others where it plays a bigger role. I don't see that it would've been hard to drop in another few Freak of the Week episodes, or even a several-parter like the Ogre one. I wouldn't consider adding those in to be padding.

But I usually find the long-form story arc stuff to be boring, probably because it seldom has sufficient payoff to make all the looming suspense and slow-moving plot points to be worth it.

I think that's my problem with Gotham generally; it's essentially a long-form story arc for the creation of Batman, and I know where it's going (and it's not going to get there any time soon, if ever). So when they spend time developing Bruce and his steely gaze, I think, "yeah, yeah, been there."

Hopefully, they'll do something interesting now that they've actually introduced a plot point for Bat-Bruce. I'm not going to hope for anything quite as dramatic (and far-fetched) as what we got in the SA, but if I were in charge, we'd be seeing flashbacks to Thomas Wayne's secret life...

Padding stories seems to be the wave of the future. Comics do it to fill trades.

I have to think it's not a good idea if they're planning for it to go into reruns for many years, since shows are often aired out of order. I've recently watched the first part of several two part Walker Texas Ranger episodes and still haven't seen part two of any of them (although one episode where he beats guys up in a truck stop has aired three times now.)

That just means that the people at the TV station don't care. If they have part one they must have part two.

Padding stories seems to be the wave of the future. Comics do it to fill trades.

I have to think it's not a good idea if they're planning for it to go into reruns for many years, since shows are often aired out of order. I've recently watched the first part of several two part Walker Texas Ranger episodes and still haven't seen part two of any of them (although one episode where he beats guys up in a truck stop has aired three times now.)

Some stations seem to have a number of episodes they air over and over, then retire and replace with another group of episodes. I noticed this after watching the Lone Ranger go from the early episodes to the John Hart episodes then the return of Clayton Moore and finally the color episodes, then repeat. After a couple of runs through the cycle they suddenly had quite a few episodes of both Moore and Hart that I hadn't seen before. The same thing happened with the Roy Rogers Show. And even after all these decades of watching the Twilight Zone I saw several episodes last year that I'd never seen before. Then they announced they were just going to run the most popular episodes.

I am just coming onto this thread for the first time, not having watched the show, but after finding out that the Joker is being played by Ian from Shameless. That's cool. I'm still not sure this show will have the tone I enjoy on TV, but I may look in on it for an episode this year some time.

I don't really like cop dramas on TV. I also don't like horror shows and movies. But for some reason, I really like both of those genres in the comics. Weird, eh? 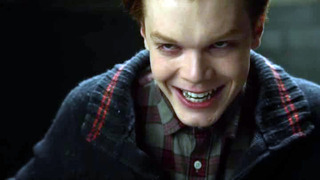 That scene was definitely one of the best on Gotham, IMO. I didn't see it coming until he looked up at the cops and smiled, and then it was pretty freaky how good he looked. There needed to be more of that foreshadowing to really make it a Batman prequel and not just an urban Fargo.

Especially since they're burning off other foreshadowing, like making Selina into a killer known to Bruce rather than just a cat burglar. I don't see Bruce flirting with her knowing that. OTOH, if they make Barbara into some looney tunes supervillain, I'll forgive them. That's really her best bet now.

I can see that the jump-out aspect of most horror shows on TV and movies wouldn't appeal. I don't like those either. We have control over how we view it on the page, and it's not as visceral.

In Scream Drew Barrymore said she didn't like scary movies because they were all alike, killers chasing people. With few exceptions, you have to go back to the 1970s to find horror movies that don't follow that rule.

I would disagree-- but it's true, that's an easy format to use, and there are a lot like that.

In Scream Drew Barrymore said she didn't like scary movies because they were all alike, killers chasing people. With few exceptions, you have to go back to the 1970s to find horror movies that don't follow that rule.

I would say most. You have to really look for films that don't follow that format.

SEASON TWO OPENER [with SPOILERS]: A couple of times I thought the episode drifted dangerously close to camp, but when that happened I just reminded myself: “Tim Burton.” They did a good job of reintroducing the characters under the new status quo, but I think they erred in allowing Jim Gordon the cross the line and actually commit murder. “The ends justify the means” seems to be the lesson of the season opener.