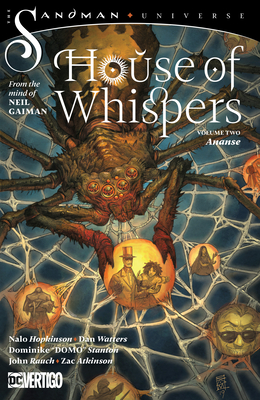 The second installment finds Erzulie and company free of the Dreaming, sailing on the rivers of whispers again. But all is not well: Shakpana's waking sickness is still multiplying in the world, splitting souls from bodies; and Erzulie's husband Agwe is becoming increasingly entangled with the boards of her boat (he merged with it to escape the Dreaming). She calls on The Corinthian (one of the Dreaming's classic nightmares, the one with mouths for eyes) to intercede with Kwaku Ananse for help freeing her husband. The great spider devours stories, and is also a trickster god. Erzulie agrees to a story contest with him.

Anansi (as Neal Gaiman spelled it) was a character in Gaiman's novels American Gods and its sequel Anansi Boys, but I don't recall the character from The Sandman. It occurs to me that the Sandman Universe seems to be taking those works--which shared story elements with the comics that preceded them--as part of the shared universe. The A.I. in charge of the Dreaming after Daniel's departure is also similar to some of the modern electronic new American Gods.

Anansi has literally heard all of the stories, so he is a formidable adversary. Erzulie's first story takes her to Hell, where she met Mazikeen (all of the Sandman Universe series take every opportunity to interconnect with the others). Ananse answers with a story that involves young Habibi, still back in the world with her soul intact. He threatens her safety, forcing Erzulie to intercede, thus winning the contest. After losing Habibi's belief, Erzulie fades from human memory and dies in the spider god's web.

A battle follows, led by Erzulie's bones and aided by the two human girls who were first separated from their souls (having come to his senses, Shakpana has ended the plague and reunited all of the human souls with their bodies). So things are mostly back to normal in the end, although Erzulie suffered a loss. Corinthian has been hunting in Ananse's domain, and for the final panel he makes a discovery. The houses come in pairs: the House of Mysteries and the House of Secrets; the House of Whispers and...the House of Watchers. Yet another potentially big addition to this universe.