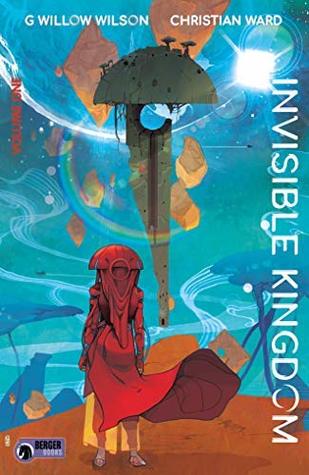 My perspective on these creators may be different from most. I know writer G. Willow Wilson from her Vertigo work (the graphic novel Cairo and the series Air), and artist Christian Ward from ODY-C, his Image series with Matt Fraction. Those projects are likely closer in spirit to this series than their more mainstream comics work. But this is a science fiction story with a much different premise.

There are two protagonists. One is a hardened freighter pilot, working for the mega-corporation that dominates commerce; the other is a young religious acolyte, joining an order that is explicitly in opposition to the commercial world. When they independently uncover evidence that these opposed organizations are in fact collaborating, it threatens both of them. The pilot stands to lose her job, and the young nun's faith is shaken. When they threaten to reveal what they know both the corporation and the religion attempt to shut them down.

Under pressure, they decide to broadcast the truth. This would normally be the climax of a long narrative build-up, but the news is greeted cynically. So what next? A surprising end to the first arc, which finds the ship heading out into the universe with no clear plan. Ward's psychedelic visuals are a big part of the impact of the story, even if they are occasionally hard to decipher. Wilson has created some memorable characters here, which promise interesting future developments.

I've wondered what this was about, Mark, and you make it sound interesting. Alas, ANOTHER book on the to-read list. What a terrible problem! :)