Night of the Living Dead is pretty famously without copyright, due to an error on George Romero's part. Anyone can publish it, so it gets included in practically every horror compilation.

Oddly enough, when I picked up my comics today, the first issue of Kill or Be Killed (the new Brubaker/Phillips book) has an article about guess what? Death Wish! The universe wants more Bronson in my life. 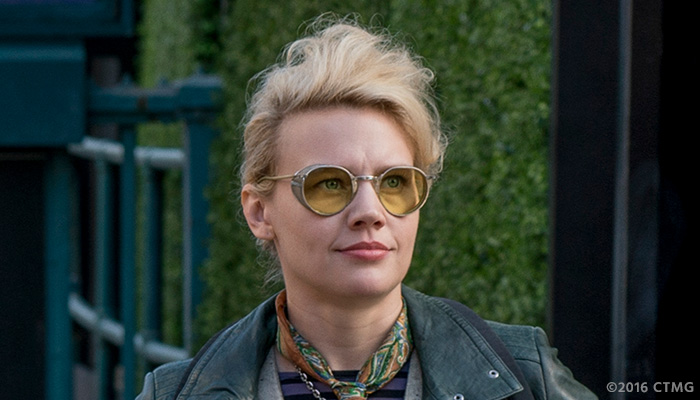 I finally saw the new Ghostbusters today. I was one of two people at the afternoon screening. Happily my childhood was NOT raped as this was not a remake but an entirely new story and original women characters not female versions of the 80s male cast.

Though I feel the original is still superior to the reboot, the movie was pretty good. It wavered between trying to make me laugh and trying to scare me but it couldn't be both. The women were strong characters with different personalities and functions though we don't learn a lot about them. And while it shouldn't be a rom-com either, maybe absolutely no romance might have been a mistake.

It was a strange ending too with the GBs getting into an actual physical fight with the ghostly equivalent of a Bat-Villain's henchmen and the new baddie was no Gozor the Destroyer either!

Much was said about too many homages to the first GB but it would have been worse if they didn't reference at all.

With all the to-do about an all female cast and a vapid Chris Hemsworth, maybe the next remake/reboot franchise can have BOTH men and women working together without making anyone look stupid, helpless or useless!

If you need more Bronson, you certainly need to see Once Upon a Time in the West. Bronson and Jason Robards are really good in it, and Henry Fonda plays a terrificly evil villain. I don't know if Claudia Cardinale was good or bad in it, as she was so breathtakingly beautiful that my brain would stop working whenever she was on screen. Plus you'll be whistling the theme song for the rest of your life.

I've been meaning to see that one for ages, actually! And I'm probably already whistling the theme... I've got a 2-disc Ennio Morricone set I've been listening to for months!

I just watched Blood Simple twice yesterday. The first time, on the Blu-ray in my Coen Bros. box set -- a good movie, and you can really see some great flashes of the Coen style. The second time, I watched it with the commentary -- by Kenneth Loring, a bogus "film historian" who throws in banal insights, outrageous tales for how they got this shot or that (the dog is animatronic.. once you factor in the training, the feeding and upkeep, suddenly a robot dog is much cheaper!), and a prolonged shaggy-dog story involving the real identity of M. Emmett Walsh's P.I. character, other scenes cut from the movie, and Loring's visit to the Merchant Ivory offices in order to secure their library for Forever Young films. This commentary might not be of everyone, but there were parts I found downright hilarious. Some editions have this commentary, others (including the upcoming Criterion edition) apparently don't. It's worth tracking down.

I fell asleep watching Star Wars Episode IV when it first came out and haven't been able to watch it all the way through ever since.

I watched Serpico last night. Not a particularly exciting movie. But a good one nonetheless. A great performance by Pacino.


Not an exciting movie? I fell asleep the first two times I tried watching it.


I fall asleep every time I watch Star Wars Episode II: Attack of the Clones. And always at the same point: Right after Emperor Palpatine is exposed and tries to turn Anakin to the Dark Side of the Force. Maybe next time I'll just start the movie there so I can find out what happens ...

"I fell asleep watching Star Wars Episode IV when it first came out..."

When it first came out it was called "Star Wars."

Just wanted to be clear which one it was. I must be missing something because I honestly don't get why it was so popular or why any sequels got made.

It was the first escapist space adventure film with a big budget and decent special effects; it wasn't cynical, revisionist, or campy, but a movie where you were supposed to cheer for the good guys and boo the bad guys, really a swashbuckler like The Prisoner of Zenda or The Adventures of Robin Hood, only set in outer space; it wasn't about social breakdown in America's cities or the supposed totalitarian forces manipulating the country's democratic institutions, and the violence in it was fantasy violence rather than brutal; it had a cast of memorable characters; the climax was good; and the stuff about the force touched a religious chord.

I have zero interest in cynical, revisionist, campy, brutal violence, or urban breakdown and enjoy swashbucklers and cheering the good guys and booing the bad guys, and I still found myself wishing I'd seen Orca instead.

I fell asleep watching Orca, and was eaten by a killer whale.

Great explanation, Luke! I'd agree with all of it. Personally I took it as an "escapist space adventure film" and a homage to the old sci-fi serials and enjoyed it on that basis. I've never really understood the fanatical fan base it attracted.

It was the first escapist space adventure film with a big budget and decent special effects; it wasn't cynical, revisionist, or campy, but a movie where you were supposed to cheer for the good guys and boo the bad guys, really a swashbuckler like The Prisoner of Zenda or The Adventures of Robin Hood, only set in outer space; it wasn't about social breakdown in America's cities or the supposed totalitarian forces manipulating the country's democratic institutions, and the violence in it was fantasy violence rather than brutal; it had a cast of memorable characters; the climax was good; and the stuff about the force touched a religious chord.

John Dunbar replied to Commander Benson's discussion Deck Log Entry # 240 An Empty Chair
"Commander, my deepest condolences to you and Cheryl, your family, and Rick's family and…"
1 hour ago

Richard Willis replied to Steve W's discussion A Cover a Day
"I looked and looked for a cover with the Golden Age Green Lantern fighting a wooden robot. Came up…"
2 hours ago

Richard Willis replied to Steve W's discussion A Cover a Day
"so is Flash a puppet or a robot?  A puppet needs a puppet master and strings, a robot is…"
2 hours ago

Dave Palmer replied to Commander Benson's discussion Deck Log Entry # 240 An Empty Chair
"My sincerest condolences to you and your family."
3 hours ago

Travis Herrick (Modular Mod) replied to Alan M.'s discussion So, What Are You Reading These Days? (besides comics)
"I am currently reading Intellectuals and Race by Thomas Sowell. Dr. Sowell, took a couple of…"
3 hours ago

The Baron replied to Steve W's discussion A Cover a Day
"Featured on the cover:  Sakamoto, the Shinonome family cat, who can speak as long as…"
5 hours ago

Lee Houston, Junior replied to Steve W's discussion A Cover a Day
"Sorry to miss yesterday. Couldn't be helped, but to make up for it... While I would learn of…"
7 hours ago

Jeff of Earth-J replied to The Baron's discussion Movies I Have Seen Lately
"CASINO ROYALE: No Time to Die was, I think, the last movie Tracy and I saw in theater before…"
9 hours ago