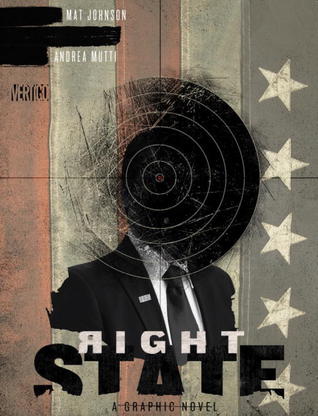 I was embarrassed to discover that I actually had read this earlier (blame my memory, not the story telling). But for some reason I only wrote a short review on Goodreads. I gave it two stars in May, 2015, and the review was pretty dismissive:

Shrill exploration of extreme right wing politics centering around a militia movement and its charismatic leader. The conservatives all come off as crazy, and the liberal administration is portrayed as a scheming political machine--we don't see enough of the President to judge his sincerity. The story works well enough as a thriller, like an episode of "24."

The story is set in late October, 2020 and begins a week before a major Presidential address prior to the November election. So the timing of my re-reading immediately got my attention: eerily close to the then-future date of the story. It's not that the plot is terribly prescient, though: there is no pandemic, and the the President up for re-election is President Obama's successor, the nation's second African-American President. Recall that at the time of the original publication, President Obama was running for re-election--so Johnson imagined a second black candidate being nominated and elected after Obama's second term, and standing for re-election at the time of this story. Another bizarre foreshadowing appears in the form of a "we will make America great again" quote in the author's signature on a right-wing manifesto.

A very different dynamic on the face of it: not a liberal President on the defensive from the alt-right (especially militant white supremacists), but the reverse.  Yet the basic political dynamic is scarily familiar, although the liberal side lacks clear definition (which is also familiar). Since the original publication there have been other comics exploring these themes, notably Briggs Land  by Brian Wood, Mack Chater, and Lee Loughridge (Dark Horse Books, 2017-2018) and American Carnage by Bryan Hill, Leandro Fernández, and Dean White (DC Vertigo, 2019).

If I were choosing the most contemporary of these, I would probably go with American Carnage.  But Right State has maintained a surprising amount of relevance to current politics. The climax includes a head-spinning array of unexpected strategies and betrayals, but it all works. Mutti's black and white art is dynamic and effective, with a wide variety of character designs. Upon reconsideration, I would upgrade my Goodreads rating to 3.5 stars, possibly 4.