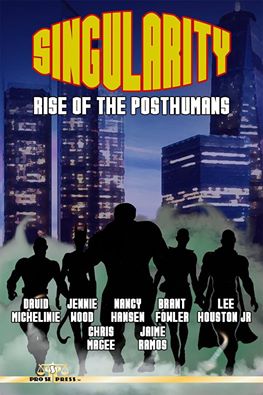 This is a project I've been waiting to brag about for almost two years now, an anthology that was on the drawing boards long before the Super Swingin' Hero 1968 Special from Mechanoid Press I helped Jim Beard co-edit.

Series creator Jaime Ramos developed the background bible and has assembled an unique crew of writing talents, including comic book legend David Michelinie to present an anthology of a possible future for mankind.

The Technological Singularity Event left the world trembling as the last of humanity faced off with the Nanite Army of Fire. Eventually the world was plunged into darkness, reducing everything to the steam driven level of the 1800’s; despite it now being 2075!

One man tried to restore some semblance of order to his part of the globe, but when he disappeared under mysterious circumstances, "Queen" Anne quickly anointed herself the new city monarch, establishing a brutal regime bathed in blood and violence.

In time, those having heard the call for revolution began to appear in the shadows to give others hope for the future.

SINGULARITY: RISE OF THE POSTHUMANS takes the core concepts at the heart of superhero tales and blends them with aspects of Cyberpunk, Noir, and more to present a new view of what might await us one day.

The anthology is now available in both print and digital formats and I hope those interested really like it, for Jaime Ramos has already laid out the groundwork for Singularity II when the time is right.