I thought I woulds start a thread where anyone can toss out their favorite Halloween reads during this time of year. I know I personally like horror comics year round, but especially during the month of October. 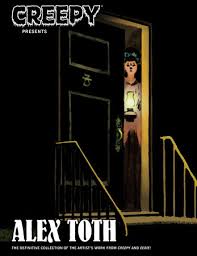 Permalink Reply by Wandering Sensei: Moderator Man on October 19, 2019 at 9:55am

I have that one too, of course! It's on my Halloween reading stack already...probably bumped up to next now. :)

I am on about page 65 or so of the TPB. The problem is I keep falling asleep while reading it! This is to say nothing about the quality of the writing--I simply fall asleep easily, especially when I read at night in bed (which is where I do most of my comics reading).

I will definitely let you know when I am finished!

Okay, I had never heard the album before I read the comic, The Last Temptation. It's by Neil Gaiman and Michael Zulli, and "stars" Alice Cooper. I get the feeling that I will get even more out of this if I do give the album a listen.

In my "review" (if you will be able to call it that), I have to say that the main thing I got out of reading this book is just how Vertigo it feels. Even though it was originally published by Marvel, and the edition I read was published by Dynamite, it is undoubtedly steeped in the early 90's Vertigo world. Neil Gaiman and Michael Zulli have some to do with this, but it is really topped off by Todd Klein's letters.

Long story short: A boy buys a ticket to a freakish show in the Theater of the Real, and Alice Cooper treats him to a nightmare of a show. We get a ghost story which is nothing overly original at its base, but Gaiman puts his own spin on it, making it feel like something a little more.

This book, with awesome art and beautiful colors, along with Gaiman's story, belongs right alongside Sandman, Death, and even Shade the Changing Man back in the 1990's. This is not a detriment, in my opinion. The datedness takes me back to a place when I loved my comics like I just don't quite feel about anything anymore.

Heck, in fact, I'm going to put this on my shelf right next to Sandman. I can just say this is part of the same universe on Earth-Sensei.