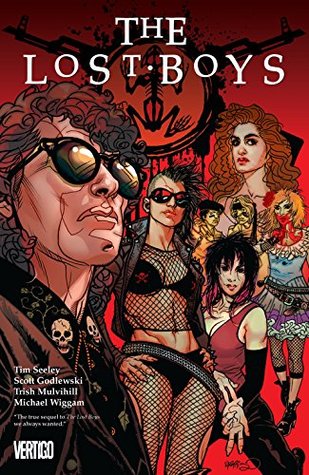 This is a direct sequel to the 1987 film (it ignores previous sequels, in any medium). So it is a licensed property, only the second one in Vertigo history. The first was Sleepy Hollow: The Official Comic Adaption of the Film From Paramount Pictures and Mandalay Pictures--Steven T. Seagle, writer; Kelley Jones & Jason Moore, artists; Daniel Vozzo, colorist (Vertigo Comics, 2000).

I'll confess to not going back to reread Sleepy Hollow, but I think I can safely say that this is better. The creative team have enough space to tell a full story (six issues), and seem to have been given enough creative freedom to do so. The setting is again scenic Santa Carla, California. In addition to the great beaches, the place has a history of vampires. The Emerson brothers (Sam and Michael) and the Frog brothers (Edgar and Alan) were the  underage slayers that took on the vampire master Max and his pack of punked-out minions in the film.

They thought the vampires were defeated, but now a coven of female undead called the Blood Belles has moved in, and they’ve targeted Sam, Michael, the Frog Brothers, and every other vampire hunter in Santa Carla for bloody vengeance. But they are not alone: there is also a certain shirtless sax-playing savior known only as the Believer (modeled on saxophonist Tim Cappello, who appeared in Tina Turner videos for music from Mad Max Beyond Thunderdome, as well as playing "I Still Believe" in the Lost Boys film). You remember him: he had an oiled, sculpted bodybuilder physique and wore only chains on his upper body.

The team manages to prevent an ancient vampire apocalypse, and the Blood Belle Star chooses to forgo immortality. She throws the ancient blood that would grant her immortality into the sea, and it falls into the hands of one of the vanquished vampires. This could be a sequel setup, but that time has clearly passed. Veteran horror writer Tim Seeley fully enters into the film's world, and artist Scott Godlewski (who was seen just previously on the Vertigo miniseries The Dark And Bloody) turns in an effective performance, limited by the necessity of portraying many of the characters in a way that evokes the original film actors.