The Quantum Age (From the World of Black Hammer) 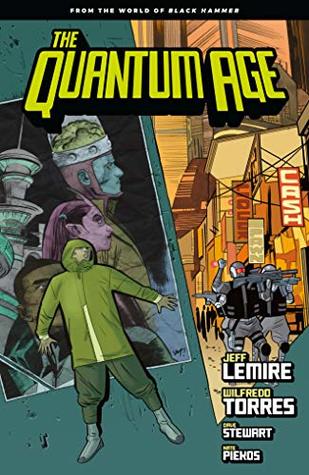 This story begins in "Spiral City, One Hundred Years From Now." The teenage superhero team called the Quantum League are civilization's guardians. The cybernetic member called Archive has a special interest in the heroes of the 20th century: what happened to them after they defeated Anti-God in 1986? The answer to that question is reserved for the conclusion of the Farm story line. But this series manages to fill in a good deal of history without actually spoiling the main Black Hammer series (although there is a brief scene set there).

The future story includes a Martian invasion and its aftermath. The Quantum League has been disbanded, and the President of Earth has no tolerance for Martians or superheroes. The big reveal of who he is is just one of many, as we also find out what became of Talky-Walky, Colonel Weird and Madame Dragonfly. And although the Black Hammer Farm story is not resolved, Weird and Dragonfly set a plan into motion to move the entire benighted universe to the end of time via the Para-Zone. It will be a new reality: Quantum World.

I have this, but I haven't opened it yet! Looking forward to it, as I love the Black Hammer Universe.