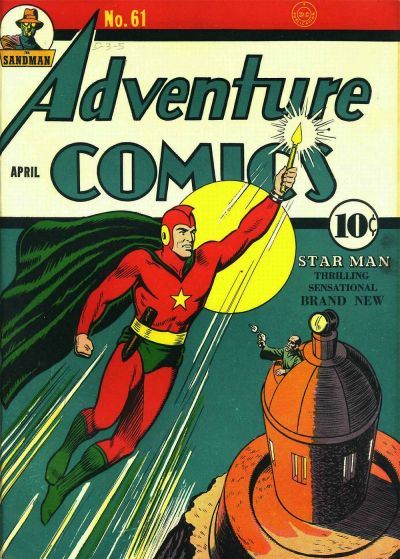 Before I start the discussion on Starman: Sins of the Father Vol.1 on Sunday (hopefully), I thought that I would get the historical info out of the way.

STARMAN (Ted Knight) first appeared in Adventure Comics #61 (Ap'41), created by the prolific Gardner Fox and Jack Burnley, perhaps Superman's best Golden Age artist. DC/National had high hopes for the Astral Avenger as he immediately replaced the Sandman on the cover and soon replaced Hourman in the Justice Society in All Star Comics #8 (Ja'42).

Ted Knight appeared to be a stereotypical "bored, sickly playboy" but he was really an amateur astronomer who created the Gravity Rod which harnessed starlight for amazing effects including flight and heat beams. But he was also a two-fisted brawler who seemed to prefer a more physical solution to his cases.

His supporting cast consisted of two people: Doris Lee, Ted's long-suffering girl-friend constantly embarrassed over his "weakness" and her uncle, FBI Chief Woodley Allen who could contact Starman with a special "radioactive capsule"! YIKES! Surprisingly neither recognized Ted as Starman, considering that he wasn't wearing a mask!

Also his first adventures took place in Gotham City or more specifically, the City of Gotham. It must have been crowded with both Batman and Green Lantern operating there!

Unfortunately Starman was never the big success DC hoped for. Jack Burnley said in The Golden Age Starman Archives Volume 1 that his style may have been too realistic for young readers. I always felt that he might have lasted longer if his powers were internal than external. 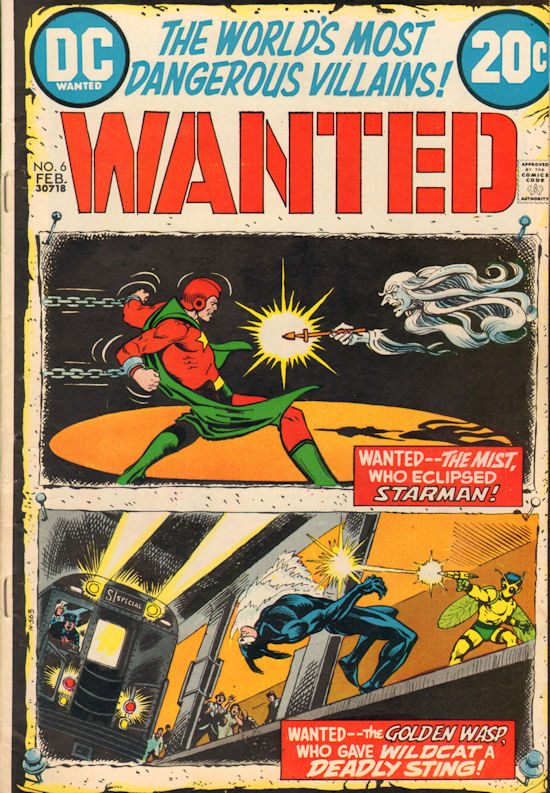 Starman fought several "super villains" like Doctor Doog, the Light, the Staring Eyes Bandits and the Camera Curse. But his greatest foe, or at least his most memorable was THE MIST who only appeared twice. The Invisible Menace first appeared in Adventure Comics #67 (O'41), which was reprinted in Superman #252 (Ju'72). His second and last was in Adventure #77 (Au'42) reprinted in WANTED: The World's Most Dangerous Villains #6 (F'73). 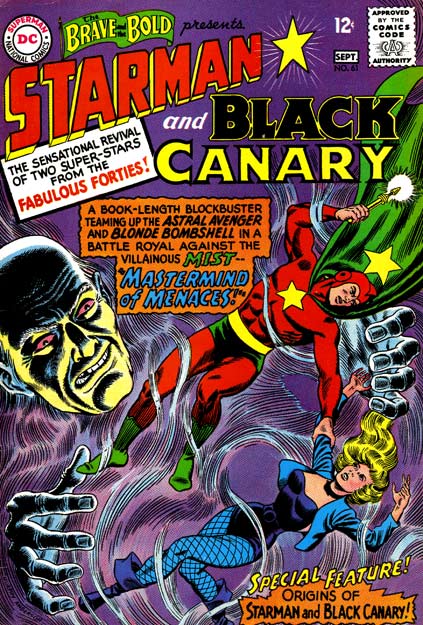 Starman was revived in Justice League of America #29 (Au'64) as he rejoined the Justice Society. He was also updated because he now was possessing the Cosmic Rod, a nearly omnipotent device that made the Gravity Rod look like a toy. Readers seem to like the Astral Avenger's unique look and color scheme because he was paired up with The Black Canary in Brave & Bold #61-62 (S-N'65). #61 was reprinted in Justice League of America #116 (Ap'75).

The Mist made three reprinted appearances in the 70s but no new ones until Justice League #195 (O'81) where he gained the power of intangibility as well as invisibility. But he never faced Starman in any of his 80s appearances!

The first time I read the original Starman story was in JUSTICE LEAGUE OF AMERICA 94 (November '71). [The image below is  from R.C. Harvey's book on THE LIFE AND ART OF MURPHY ANDERSON--he calls it a house-ad, but it was actually a feature page that introduced the two reprints in that issue.]

When doing research on Jack Schiff for my blog I turned up the fact that he created or co-created Starman. I know that Gardner Fox wrote the story and Jack Burnley did the art, but Schiff was the editor on ADVENTURE COMICS at the time, so I believe he came up with the idea for Starman and gave it to Gardner Fox to write and Jack Burnley to illustrate. 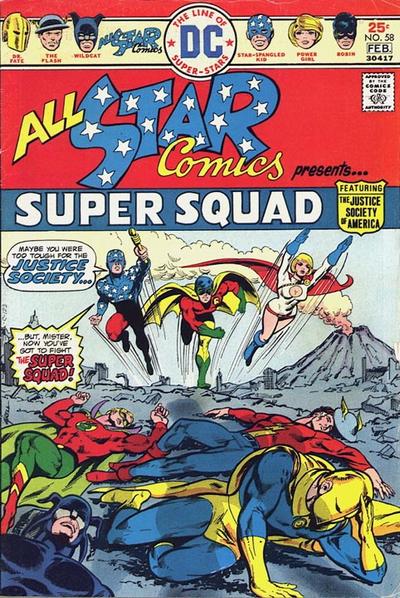 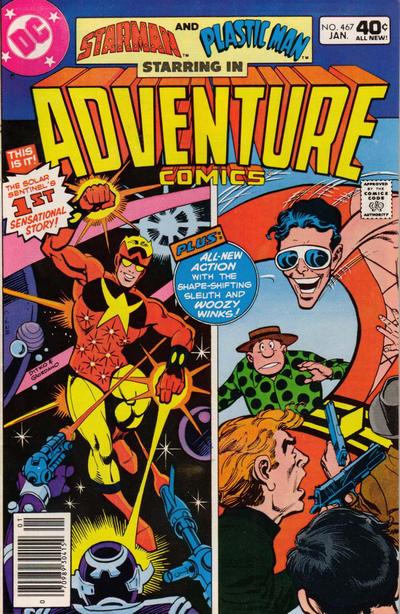 During the 70s there were several Starman stories reprinted and he appeared in five JLA/JSA team-ups, though he never really shined in them. The Justice Society received their own title with All Star Comics #58 (F'76) where we learnt that Starman had broken his leg and had given his Cosmic Rod to the time-transported STAR SPANGLED KID while he healed. Later the Kid used Ted's technology to create the Cosmic Converter Belt so Ted could get his rod back.

The belt allowed him to fly and fire bursts of cosmic energy and took away any embarrassment of wearing that outfit or using that name!

Later the SSK would found Infinity Inc. and then take the name Skyman, became next-to-ueless and was quickly killed off.

As Ted Knight was recuperating in February 1976, DC put out 1st Issue Special #12 (Ma'76) which introduced the alien, blue-skinned Mikaal Tomas who was never called "Starman" in the story which ended in a cliffhanger with the fate of the world at stake and was never concluded.

He had super strength, flight, fighting skills and a power gem. And he didn't bleed.

A brand new Starman was introduced (once again) in Adventure Comics #467 (Ja'80) by Paul Levitz and STEVE DITKO!!

Here he was an exiled Prince Gavyn who possessed solar powers and had a mysterious alien mentor named, well, M'ntorr. His story was space opera and as epic as they could make it. He shared the book with Plastic Man who ha gotten his own Saturday morning cartoon show, though here they featured Woozy Winks, not Hula-Hula!

Soon Aquaman was added to the book and took the spotlight away from both heroes until all were kicked out for a new DIAL H FOR HERO series.

This Starman would return in DC Comics Presents #36 (Au'81), trading in his distinctive uniform for a rather boring all-blue one. Unfortunately he was killed off in the Crisis, thus freeing up the name again! 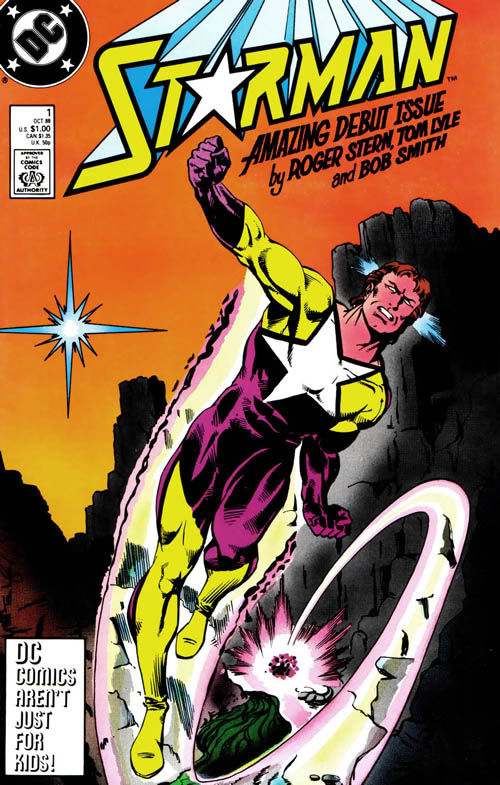 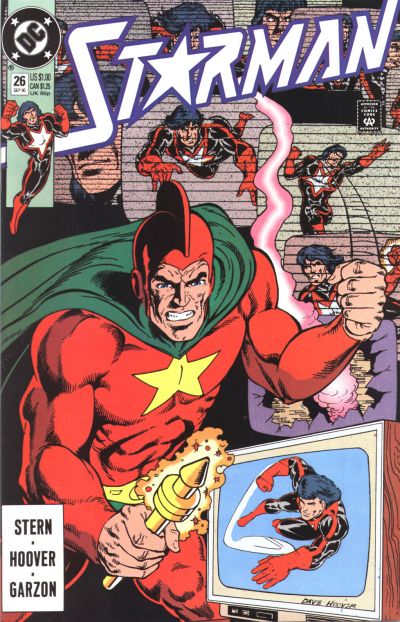 Right after the Crisis, DC decided to eliminate the JSA by sending them to fight for all eternity preventing Ragnarok in The Last Days of the Justice Society Special including Starman. Roy Thomas didn't seem overly fond of him as he brought up a ouple of times that Ted Knight paid "real" scientists to create the Cosmic Rod.

This paved the way for Starman #1 (O'88) which introduced Will Payton as Starman V! He was struck by some weird energy that gave him the usual "star" powers: strength, flight, heat blasts. But he could also change his appearance which helped with the secret identity thing!

As a change of pace, he was based more or less in the American Southwest though he did meet several DC heroes and once turned down an invitation to join the JLA.

Rebelling against super-hero conventions, Will revealed his identity to his sister Jayne.

By 1990, Starman had changed his costume to a less-appealing black and red version and found himself challenged by DAVID KNIGHT, the previously unknown son of Ted in Starman #26 ('90). David was angry that Will had taken the Starman name which he felt was his legacy. He wielded both the Cosmic Rod and the Cosmic Converter Belt. David was goaded to battle Will by his trainer, who turned out to be....the MIst who stole the cosmic weapons and briefly augmented himself as Nimbus.

After defeating Nimbus, David stepped down and gave permission for Will to continue as Staman.

Later Will Payton was apparently killed off by Eclipso.

But Starman would return!

I greatly enjoyed the Brave & Bold team-ups with Black Canary when they originally published. The backstory on David Knight was interesting. He was previously known to me only from the Jack Knight series.

I'm looking forward to the review of the first volume of the Jack Knight Starman, one of my favorite series. Unfortunately, I'll have to play catch-up because I won't be able to participate all this coming week. Maybe I'll make some last minute comments when I'm able. This thread will definitely be the first thing I look at.

The original Starman (and the rest of the JSA) returned from Limbo at the end of the Armageddon: Inferno mini-series and aare active in the all-too-brief but excellent Justice Society of America, though Ted appears only briefly in it.

Finally, DC goes all out on the Twilight of the Justice Society in Zero Hour #1 (S'94) where Extant removes all the revisions that kept them from ageing and turns them all old! This would kill off the Golden Age ATOM, HOURMAN and DOCTOR MID-NITE. Ted Knight survives, however, but is now elderly. At the hospital, he passes the torch cosmic rod to his son, David in the presence of yet another previously unknown son, JACK KNIGHT who says the worst possible thing that he could say!

Zero Hour was another attempt by DC to reboot its books. They also added titles like Fate, REBELS, Manhunter and Primal Force. I guess it's not a spoiler to say that Starman transcended all that!

Next: David's Day and Jack's Night

Great overview of the background to Robinson's Starman series.  There doesn't seem to have been that much for him to run with, but he made it go a long way, didn't  he?

Perhaps a hero who's had more limited exposuire lends itself better to the kind of series Robinson eventually crafted?  It's easier to treat realistically, than somehting that goes all over the place and is reset various times and with huge changes in character and personality along the way.

I was chuckling to myself about Extant just yesterday.  His name means simply 'in existence (somewhere)'.  So yes, if we can say nothing else about Extant, or his whys and wherefores, he definitely was around for a while.  He existed in the DCU.

That was his power.

The thing is I got hung up on trying to buy all the crossovers--or almost all for those big events. The amount of comics I bought in the early '90s kept piling up and I found it harder and harder to get through my pile of comics. And there were a lot of comics I never did get around to reading. Until I decided this was madness and cut everything except those comics I had managed to keep up with all along.

So I bought most of those number zero tie-in comics for ZERO HOUR, but I didn't read the bulk of them. STARMAN was somewhere in that pile. I might've thumbed through it, but I had already decided that this Starman character was just a slacker and his whole attitude was against the classic kind of super-heroes I admired. I just figured the comic was going to slag off everything I ever liked about comics--because that's was 90% of all comic books were doing at that time--so I never bought anymore STARMAN after zero.

But I kept hearing good things about STARMAN. And finally a couple years later, I tried it out and liked it and realized that it was (in its own way) trying to rebuild the classic super-hero genre. Thankfully the early issues were collected in TPBs so I could get caught up on what I had missed.

I enjoyed the Will Payton series, it was also something unique for its time.  Unfortunately, while Stern's characterization was top notch, the series fell down a bit with the adversaries.  I kind of view it like Moench's Spectre run, a series that started off with some entertaining elements, that got eclipsed and forgotten due to the popularity of the series that followed it.  (Also, because I was attached to the prior series', I was late to the party for each of the more lauded titles.)

I haven't read Robinson's whole Starman run yet, but I kind of get the impression Will isn't treated very well... I guess it all went downhill when he changed his costume. ;)