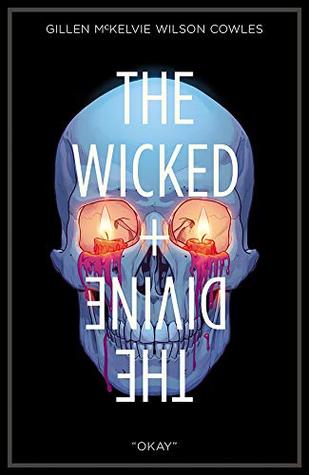 Another long-term series finally concludes here. The narrative flow was a bit interrupted by Vol. 8's Specials collection, but I suppose publishing it last would have been anticlimactic. Baal has hatched a plan to sacrifice an entire arena audience to store their life energy to defeat the Great Darkness. Persephone plans to divert all that energy to her own purpose, to power an apocalypse. Laura Wilson (who has abandoned her role as the goddess Persephone) leads the audience away to safety. Her powers still work--if unpredictably--so she uses them to rescue the Norns and all of the living god heads. Now that's not something you can say often.

Laura has figured something out, but for her solution to work the gods have to believe her. A series of flashbacks confirm that Ananke and her sister have found a way to live forever. It involves convincing mortals with gifts that they are gods with only two years to live. "As long as there are other fools who would confuse being gifted with being godly, we can persist." One by one, the gods acknowledge that they are not gods, reverting to their mortal identities. As long as Minerva/Ananke remain alive there is a possibility that the cycle could recur. Baal sacrifices himself by jumping off the roof with her, and we see Laura being sentenced to life in prison.

Jump ahead to "Valhalla, 40 years later." Laura is attending her wife Cassandra's funeral. All of the former gods are there, having lived long, productive lives. Cassandra gives her own eulogy as a hologram. Then Laura reminds the reader that stories are written as if they are inevitable, but the future is really up to you. The final page is a lovely visual representation, and the end of the collection. The wake for the series already happened in the back matter from the previous volume.