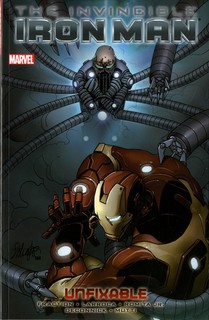 By Matt Fraction and Salvador Larroca

The first volume features an interesting contest between Iron Man and Doctor Octopus.  Doc Ock is dying and he challenges Iron Man to prove that he’s the smartest man in the world by curing him.  If Iron Man fails, Doc Ock can at least die content in the knowledge that he was the smartest man in the world after all.  As added incentive, Doc Ock sets up a few bombs set to explode should Iron Man fail.  It’s a compelling battle of wits.  Tony Stark wants to fix Doc Ock, partly because that’s what he does, partly to save the innocent lives endangered by Doc’s plan, and partly because he likes proving his superiority almost as much as Otto Octavius.

It’s a lot of fun to watch Tony think his way out of the problem instead of simply punching his way through it.  Tony attacks the problem sideways instead of straight on, showing that it’s his creativity that separates him from Doctor Octopus and not their respective IQs.

Matt Fraction makes excellent use of Pepper Potts as Rescue.  She’s been Tony’s business assistant for a long time but she’s relatively new at this superhero thing.  However, Fraction has her work on the bombs directly while Tony keeps Doc Ock busy with their battle of wits.  The division of labor plays to Pepper’s strengths.  She’s not a fighter, but she’s able to rescue innocent people and defuse a bomb or two.

Fraction also makes excellent use of flashbacks to establish a long-running rivalry between Iron Man and Doctor Octopus, and Salvador Larroca does a great job of differing his style just enough to make the flashbacks stand out.  The two don’t usually meet up in comics but Fraction is able to add emotional content to the encounter based on a believable backstory.  It’s also a lot of fun to see a writer switch things up like this.  The X-Men are often unfairly criticized for fighting only their own villains and ignoring the rest of the Marvel Universe but that criticism is true for most heroes.  Spider-Man doesn’t usually fight the Mandarin, and Kraven doesn’t try to hunt down Iron Man.  By pairing Iron Man with one of Spidey’s rogues, Fraction is able to craft a story that feels new and classic at the same time.

My only complaint concerning this volume had to do with the art.  Normally, I’m a big Salvador Larroca fan- back to the mid ‘90s when he first showed up in X-titles like Excalibur.  However, Larroca’s over-reliance on reference photographs proves distracting here.  He models his Tony Stark on actor Josh Holloway, who played Sawyer in the television show Lost, and the overt reference keeps kicking me out of the story. The Fear Itself volume isn’t nearly as good.  Fraction again does a good job with Pepper Potts as Rescue, having her focus on saving people from Paris as it’s quickly turned to stone by an amped up Grey Gargoyle.  However, the rest of the story suffers from the standard problems of crossover tie-ins.

The main story is obviously taking place in another title- the big event Fear Itself.  As the tie-in title, Fraction has to find a story somewhere on the periphery.  He comes up with a decent idea- Iron Man travels to Asgard to build weapons capable of defeating the Worthy.  However, the story drags on in order to keep pace with the publishing schedule of the main event.  Tony Stark building new weapons in Asgard isn’t interesting enough to build a five-part story around, even with a second plot focusing on Pepper Potts.

However, the biggest misstep had more to do with character than plot.  Fraction has Tony Stark offer up his sobriety as a sacrifice to the gods of Asgard.  It allows Fraction to depict a drunk Tony but it’s not clear within the story why Tony has to offer any kind of sacrifice when he can simply ask Odin for help, which is what he does next.  I didn’t enjoy Tony’s relapse and I didn’t understand how it was supposed to help the story.  There was one bright spot though.  After Tony sobers up, he turns down a drink from his dwarf allies and one of the dwarves reveals his own struggles with alcoholism- the burning in his gut that never goes away.  It’s a poignant scene even if a misstep made it possible.

The best part of this volume is, ironically, the art.  Larroca does an amazing job with the Paris scenes.  The battle scenes between the Grey Gargoyle, Detroit Steel and Rescue are powerful.  You can practically feel the impact of their blows off of the page.  Plus, the depiction of a devastated Paris is heart-rending.  Larroca captures the heart-rending, haunted look of the survivors and does a great job of ratcheting up the emotional tension.