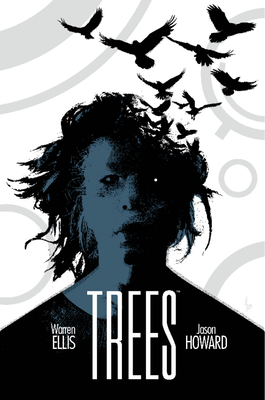 Warren Ellis has said this is the last Trees collection "for the foreseeable future," but that hopefully the creative team will return to it someday.  The series was always intended to have a global view: the second collection revisited some characters from the first one, but this one looks at an entirely new cast, in a different part of the world.

The setting is Toska, Russia, and it opens eleven years ago, as the Trees are first descending. Like all of the previous story openings depicting the arrival of the Trees, the gigantic scale and the abruptness of the event are vividly portrayed. In the present, police sergeant Klara Voranova starts her morning with news of a murder victim at the base of the nearby Tree. He is a stranger: Klara says the official population of Toska remains 63 persons. It's a small town in the middle of nowhere (whose name means sadness or melancholy in Russian), but the population was 601 before the Trees came.

So the murder mystery plays out against a background of isolation and desperation. As the investigation proceeds Klara realizes just how far it extends, and how few townspeople she can trust. She solves the mystery, but at the cost of several more deaths--and her life in the town. So what are the three fates of the subtitle? Klara's is one, certainly, and I think her lover Sasha as well: he is felled by the Trees at the outset, but returns at the end as some sort of ghostly visitor. The third could be Nina: as master of the railway terminal, she was the real power in the town. Or the town itself. Nina took keeping the town unchanged as her charge, so her death could be seen as the death of the town. Either way this is a dark and solemn story, full of the surprising twists found in any good mystery. Not a bad series ending, if it turns out to be that.