Who Was the Green Goblin?

This question has sparked heated debates among Spider-man fans for years, and even today, flame wars erupt between passionate fans who quarrel over which character was intended to be revealed as which version of the penultimate villain.

Appearing first in ASM #14, the Goblin quickly became a fan favorite, returning in #17 with a plan to show up Spidey and eliminate him.  By #23, the Goblin was setting his sights on taking over the organized crime of NYC, and by #26-27, he was involved in struggles with The Man in the Crimemaster's mask.

Although the Green Goblin makes no more appearances in costume under Steve Ditko's artwork, by issue #38, the groundwork for his identity has been laid. With #38, Ditko quits the series and Marvel.

In #39, the man in the Goblin mask has captured Spider-man and reveals himself to be Norman Osborn, industrialist and father of Peter Parker's college friend, Harry Osborn.

But for years, it has been debated whether Ditko had intended Osborn to be the reveal as the Goblin, or if it was going to be Ned Leads, J. Jonah Jameson, or an unnamed non-recognizable average man.

The first time I heard this alternative theory was in a 1982 publication by Fantaco Press, the Spider-Man Chronicles. Today I found a copy of this 1982 fan publication and present a copy of one of the critical article pages here. 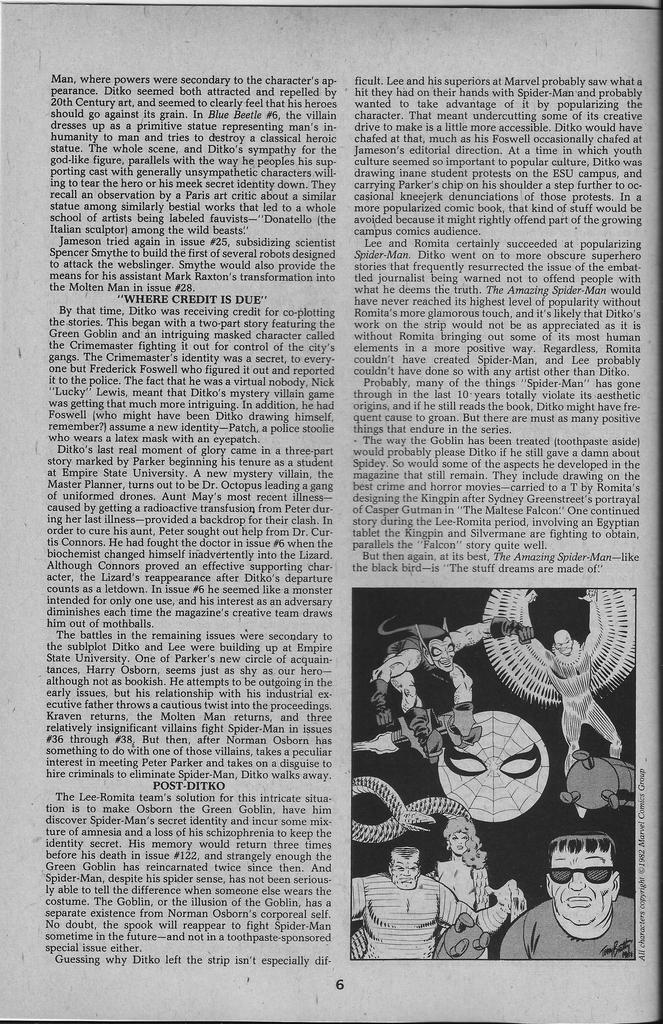 And here's the facing page that picks up the narrative with the John Romita, Sr. years that follow. Note the assertion that Lee and Ditko had never agreed on who the Goblin was going to be shown as. 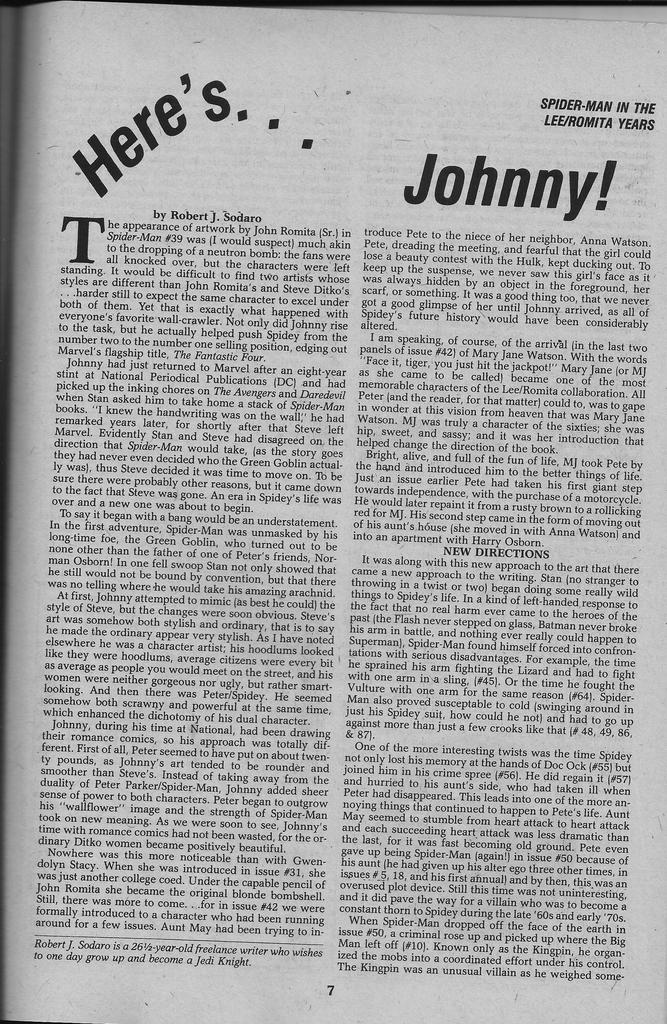 However, even after Norman Osborne developed amnesia and the Goblin was declared "dead", the threat lingered in the background.  In the first Spectacular Spider-man oversided 35 cent magazine, the Goblin returned, his amensia threatening to clear by ASM #66. Through the use of Psycho-pumpkin bombs, the genie was returned to his bottle, and until the famous anti-drug stories of 96-97-98, the Goblin was missing again.

Returning one final time in ASM 121, the Golbin kills Gwen Stacy and is in turn killed by his goblin glider the next issue #122.

While Harry and others have impersonated the Green Goblin later, it wasn't until scribe Roger Stern penned a return of the Goblin costume and tools with the birth of the Hobgoblin in ASM 238 that the mystery began again.

This time, the identity was held from the reader as similar clues were shared with the reader. The Goblin's lair had been discovered. The man was wealthy, powerful, a member of JJJ's club, familiar with the organized crime mob, sparred with the Kingpin, and at various times, used imitators or closely related villains as fall-guys.  For a time, the Hobgoblin retired from view, and was assumed to be plotting in the shadows.

Suddenly, it was revealed that the Hobgoblin was Ned Leads and had been killed by a trio of killer when caught un-awares.  And that's where the issued rested for years.

Finally, Roger Stern convinced Marvel to let him conclude the Hobgoblin saga as he had intended, and in a 3-issue mini-series, he not only revealed that the Hobgoblin was not dead, but that Spidey had overlooked a critical clue...that MJ notices. "How could 3 men over-power the Hobgoblin's augmented strength?"

At the climax of the mini-series, the Hobgoblin was revealed to be Roderick Kingsley, one of a pair of likely suspects that Stern had introduced several years before. Stern insists that he had always intended Kingsley to be the Hobgoblin and that was the original solution to the riff on the Goblin mystery that he had spun and proposed years earlier.

Despite additional writers and editors getting involved and muddying the waters, these two villains now remain as published, as their creator/artist/writers intended them to be revealed.  But the debate continues over whether the right person was revealed in both cases.

***Footnote: When challenged on my belief that Ditko had intended Ned Leeds to be the Green Goblin, I had cited the above publication, which I firmly believed had stunned me into thinking that I had missed the first clues. Now, more than 25 years later, when I have a copy of the publication in question in hand....I discover that it doesn't say what I remembered it to have said. Yet I remember my profound stunned shock when I first learned that it might NOT have been Norman Osborne all along. And as a result, I decided to share the pages I thought would prove my point. But I can't. So, I appologize for my stuborness in any discussion we may have had over the months. I can't back up what I had thought I read here.  But I DO recall someone pointed to the grinning manikin on page 19 of ASM #38 and claiming that it was the proof that Ned Leeds' smile was the Green Goblin's grin, and that was Ditko's final word on it.  But I can't find that in print now either.

It's long been said that Stan wanted it to be Osborn, while Ditko wanted it to be someone unknown to everyone, because that's the way it happens in real life. Stan thought comics readers needed more than that, and Ditko quit in a huff.

Stan told me in an interview that their disagreement came to a head when Stan decided the Master Planner would be Dr. Octopus in #32. So Ditko got his way with the Looter in #36, with Spidey whipping off the defeated Looter's mask and saying, "Huh, I never saw him before in my life," just to make the point clearer.

So then it was the Goblin's turn, and again Ditko supposedly wanted it to be nobody, and Stan wanted such a big reveal to be someone significant.

It's been suggested that Ditko wanted it to be Ned Leeds, but earlier it turned out Frederic Foswell was The Big Man, and having two Bugle reporters being big-time crooks under masks and aliases was pretty implausible to be coming from Ditko, it seems to me.

It's possible that Leeds was made the Hobgoblin due to that earlier idea. Nowadays, it's hard to do these big reveals, because there is so much chatter and combining of ideas and clues that most times such a secret can be figured out in advance--if someone doesn't actually know and leak it.

My experience was that the editor of ASM at the time, had asked a convention meeting room who they thought the Hobgoblin was going to turn out to be.  There were some wild guesses, and at least a few had suggested it was going to be Ned Leeds. (This is prior to his sudden death.)  He pressed him for an answer as he cleared the dias and prepared to leave the room, if any of our guesses had been right.  In a smart alex way, the editor remarked that no matter who we thought it was, they were going to change it so that we wouldn't be right, but that we'd all be surprised.

I always felt that the move to kill Ned Leeds off was just that sort of move... just to spite the fans and proove them wrong.

But Roger Stern has assured me and others in print and at every opportunity, that he had always intended Hobgoblin to be Roderick Crawford right from the start, and that he had carefully orchestrated it so that he could be, and that the clues would point toward him, without giving him away.

So I yield to Mr. Stern on this one.

Steve Ditko has gone on record that since he created The Green Goblin and knew the character inside and out, he had always intended him to be Norman Osborn. He had Norman appear as a background character at JJJ's club. And he introduced Harry Osborn to add some "personal" level to the situation. Stan Lee had nothing to do with the plotting from an early stage, which is why in the mid-20's Ditko demanded credit AND PAY, and got it. At which point Lee stopped talking to him (the money had been going to him until then).  So there's no way Lee knew or planned who The Goblin was, because he was only writing the dialogue.

The story Lee told Romita afterwards was just that... a story. Like countless others.

>> So there's no way Lee knew or planned who The Goblin was, because he was only writing the dialogue.

Hmmmmm, that's an interesting conclusion you're drawing there. I'm pretty sure, though, that Stan was the editor of the comic book in question, so it seems likely he was doing more than "only writing the dialogue."

Re: The Master Planner... I have never understood WHY Dr. Oct would bother with this concept...to hide behind another name. It's OBVIOUS to all his men who he was. He couldn't remove the tentacles, could he?  And the storyline of the Master Planner didn't seem to go anywhere...(Not the Spider-Man thread..that's masterful!)... but the whole concept of the M.P. is just abandoned after the first issue of the trilogy or so.

I didn't realize until the past decade that "Who is the Hobgoblin?" was such a big deal. I remember when Ned Leeds was revealed I was just like, "Okay." and moved on. I was always more interested in the Rose mystery.

You should check out Doc Doom's machine. I understand it's been very reiable!

This is what happens when you have 2 writers working on a book who aren't speaking to each other.

I seem to remember running across that as well, Henry.  Most all the disconnects and non-sequitors that you point out, I recall noting as a kid, and wondering "Huh?"   So they all ring true for me.  I still remember the cops teasing the cat, who's hanging down inside a chimney when he vanishes on a rooftop, and Spidey looking on, thinking, it's only a matter of time before they figure it out...

Oh I realize that there was a fairly lengthy article in Back Issue on the subject. I just didn't care who Hobgoblin was, and didn't realize until much later what a big deal it was for a lot of readers.