The much-anticipated Batman: Earth One is out ($25.99), and it lives up to the hype. Written by DC’s Chief Creative Officer Geoff Johns, it re-imagines the Dark Knight’s origin in the modern day, just as Superman: Earth One did for the Man of Steel last year. And it’s a corker. 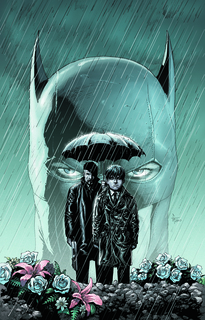 Yes, we all know the outlines of the story: Bruce Wayne’s parents were murdered in an alley before his eyes, and he vowed to protect others from the same fate by becoming a masked vigilante. But this updating makes a few changes that not only make the story more plausible, but rams home the emotional punch of the story.

One thing artist Gary Frank does is eliminate the whited-out eyes look on  Batman’s cowl and allow Wayne’s blue peepers to show through. As any actor will tell you, allowing the audience to see your eyes heightens the emotional connection. The whited-out eyes – which has been with Batman since the beginning – is cool looking, but this book is going for emotional impact, not a coolness factor.

Another change, obvious in retrospect, is to imbed a great many Bat-elements that accrued over the decades right at the beginning. Bruce Wayne and Commissioner Gordon were there from the first story in 1939, but Alfred Pennyworth, Det. Harvey Bullock, Oswald “Penguin” Cobblepot, Lucius Fox and Arkham Asylum were added piecemeal over the decades. They’re integrated here into the origin story, fleshing out Batman’s world immediately in an organic and convincing tapestry. Also, it all rings true, in that Alfred is a former Royal Marine, Arkham is Martha Wayne’s maiden name and Bullock’s fall into nihilistic cynicism is horrifically foreshadowed.

Further, this Batman is a genuine amateur – and out for revenge. For Batman to be heroic, and to believably survive, he must become the consummate professional and protector of the innocent we know him to be today. That is, in fact, his story arc – and it is played for maximum drama, rather than anti-heroism or pratfalls.

I make no secret that I was greatly disappointed by Superman: Earth One. But this take on Batman is so powerful I sure wouldn’t mind reading more. 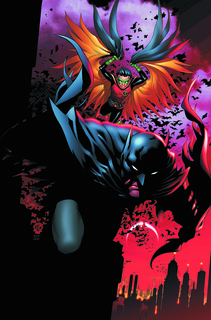 * Batman and Robin Volume 1: Born to Kill ($24.99) does something I never expected: It allows Batman to grow. The premise of the series is that Batman’s 10-year-old biological son, via Ra’s al Ghul’s daughter and raised by the League of Assassins, is the new Robin. The friction between the Bat and Bird is palpable, as Batman struggles to rein in Robin’s homicidal training and recklessness without alienating him completely.

That’s pretty interesting, but what I found amazing is that writer Peter Tomasi shows Bruce Wayne becoming something he never was with the other Robins: a father. His new perspective allows him to bury some old ghosts and re-connect with his softer instincts, making for a kinder, gentler Dark Knight. I don’t know how often that particular card can be played, but it sure made Born to Kill an eye-opener for me.

* The controversy over the first lesbian character to headline a comic book sometimes overshadows just how good that book is. I heartily recommend Batwoman Volume 1: Hydrology for the sheer skill of writer/artist J.H. Williams III. Not only is he an excellent craftsman and storyteller, but his ingenious use of panel shape and structure, which can be irritating in the wrong hands, adds another layer to his story.

Which itself is pretty cool. Batwoman is a unique Bat-character, and not just for her sexual orientation. Her hypercharged relationships – from her estranged father to a wannabe sidekick to an aloof Batman who is reserving judgment – keep the book tense even when there’s no fighting going on. But don’t worry, there’s plenty of that, too.

* I absolutely love everything writer Gail Simone has ever done, so maybe I set the bar too high anticipating Batgirl Volume 1: The Darkest Reflection ($22.99). Don’t get me wrong: It’s a good book, with a likeable lead character who seems very close to Simone’s heart. But it doesn’t include the delightful, sometimes shocking, weirdness of Simone efforts like Birds of Prey and Secret Six.

It’s no secret that Batgirl returns Commissioner Gordon’s daughter Barbara to the role, after 24 real-life years (but three in the comic book) of being confined to a wheelchair after being shot in the spine by The Joker. How and why she’s on her feet again is only hinted at, but the net effect is that this collection works more or less as an origin story, as the lead character re-establishes her life in both identities.

It’s not as Simone-y as I would like, but it’s still a decent, mid-level Bat-book.

1. Batman: Earth One re-imagines Batman's origin as if it took place in the modern day. Copyright DC Entertainment Inc.

Cap, did you think that Comissioner Gordon was depicted at all problematically in this book?

"I want him brought in by the book, by the book, you hear?"  (to quote a line from Killing Joke) isn't something this one's likely to declare.

In Batman: Year One, Gordon only used a baseball bat to give to a corrupt cop that he was about to beat up - to even the odds for the poor sap, whereas he uses one here to beat up an unarmed, outnumbered suspect, to basically torture information out of him.

I understand your question, and the fact that I don't know the answer is what interests me.

Both Gordon and Batman begin character arcs -- and neither are anywhere finished with those arcs when the story ends. At the end, Gordon is clearly on the path to being a good cop after being a not-very-good one. Whether he ends up as good a cop as The Killing Joke guy isn't certain, though, just as this Batman may or may not become one motivated entirely by justice and not by revenge. That's one reason I wouldn't mind reading more of this particular version -- there is still some question whether or not these guys will embrace the Dark Side or not, a tension that's absent in other Bat-books, where those issues are more settled.