Behind the comic-book ad: Record Club of America

I moved to York, Pa., about 12 years ago, and my wanderings through the area lead me to an interesting discovery: This was once the headquarters to the Record Club of America, a company that frequently advertised in 1970s-era comics.

Through a little bit of internet Google-fu and some on-site snooping, I've found a little bit about the company that duked it out with BMG and Columbia House, two more well-known music mail-in clubs.

You can read all about it in the latest entry at Comics on the Brain! 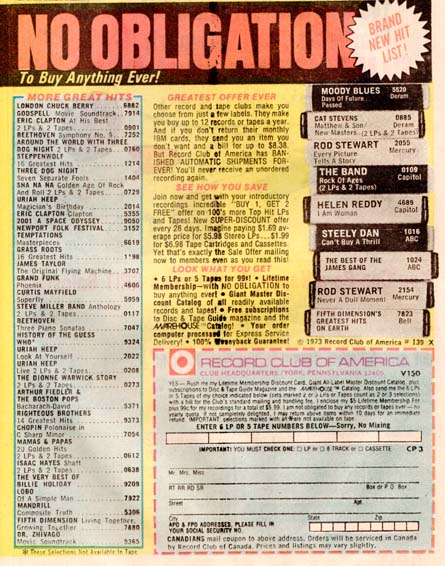 I remember that 70s period when record club ads were all over our fave funnybooks .

Hey , as for records/audio music carriers , remember that some 1970s comics advertised these peculiar " HISTORY OF ROCK'N'ROLL/COUNTRY " " THE BEST OF 19__ " collections that were clearly some sort of bootlegs/slipping through the older laws about sound recordings unauthorized thingees ?????????

Comment by Lumbering Jack (M'odd-R8-Tr) on August 3, 2011 at 6:44am
I just found the official property listing for the Record Club of America site. Check it out here. The listing includes 4 images of the outside of the building.

Oh , like wow , man , it's really great playing on this Realistic Instant ComputerSet to pretend that I'm writing to someone in the year 2011 , 36 - or is it 35 - years from now , I gotta get my other comics-collecting fan in our alternative high school , he's a good dude but he has funny hair and when his aunt took him to New York City - aren't they going bankrupt or something ? - he came back talking about this b*tch named Patty Smith - look at her album cover (in Crawdaddy ,m or is Circus , here Uh , I wouldn't buy it , man) ! Chick looks like a dude !!!!!!!!!!!

I never cancelled my membership. Fo you think I can still redeem my credit memo slips for albums???