I have a small Fluit Notes tradition: during vacation, I like to take a corresponding break from comic book articles and write about genre TV shows instead. In the past, I’ve written “Best of” lists for Buffy the Vampire Slayer, Angel, Farscape, Babylon 5 and Lost. This year, I take a look back at five seasons of Chuck, the spy comedy that recently came to an end. 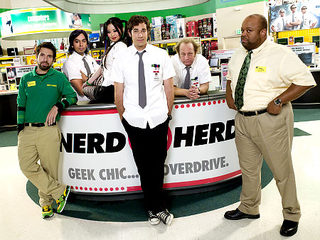 Chuck vs. the Intersect (1): Wikipedia describes Chuck as an action-comedy-spy-drama. That was both the attraction and the problem. For viewers like me, it was an interesting genre mash-up: a combination of workplace comedies like The Office, spy adventures like Alias and quirky romances like Moonlighting. Chuck could be hilarious one moment and exciting the next. Yet some viewers and critics were confused by a show that defied categorization. USA Today consistently called for the show to dump the BuyMore. I think they were way off base. The workplace hi-jinx grounded Chuck in an ordinary world that the rest of us could relate to while also providing some of the show’s most memorable moments. Plus, the on-again/off-again relationship grew into the real heart of the series, providing an emotional core that sustained it for five seasons.

Chuck vs. the Tango (3): This episode is notable mostly for being the first to run separate stories for the BuyMore employees and the spies. However, that’s more of a historical footnote. The reason why I enjoyed this episode- and remember it so fondly- is that it expanded Chuck’s role in the spy world. It showed that spying would be about more than accessing the Intersect or the occasional fistfight. Chuck had to infiltrate a fancy auction, pretend to be the debonair Charles Carmichael for the first time and, yes, dance the tango.

Chuck vs. the Wookie (4): Chuck was a show about friendship as much as it was about romance. This episode showcased the friendship between Chuck and Morgan, while contrasting it with the working rivalry between Sarah and guest-star Carina. Carina’s flirtation with Morgan was the highlight of the episode and it led to some remarkable recollections in later seasons.

Chuck vs. the Truth and Chuck vs. the Imported Hard Salami (8 & 9): One of the ways the creators of Chuck amped up the romantic tension was by occasionally introducing other love interests. Chuck has such low self-esteem at the beginning of the series that he finds it hard to believe anyone would be interested in him romantically. The result is that he misses early signals and that he’s easily distracted from Sarah when he finally notices them. This two-part story featured Rachel Bilson as a deli chef who names a sandwich after Chuck.

Chuck vs. the Nemesis (10): Matt Bomer returns as Bryce in this critical episode. As Chuck’s old college roommate and Sarah’s former spy partner, Bryce is the connecting link between the two of them. He’s also the perfect spy- suave, confident and competent- everything that Chuck is not. As a result, Sarah is attracted to him and Chuck feels inadequate because of him. Every time Bryce returns to the series, Chuck is forced to step up his game becoming more of a spy and more of a man.

Chuck vs. the Seduction (2): In season two, the CIA has decided to use Chuck as a full-fledged agent and not just an asset. Throughout the season, Chuck is trained in new skills and dropped into new situations. In this episode, he is taught the art of seduction by master spy Roan Montgomery, who is played by John Larroquette. The training forces Chuck to confront his emerging romantic feelings for Sarah, even though they aren’t yet comfortable as a couple.

Chuck vs. Tom Sawyer (5): Chuck is at its best when the spy stories and the store stories intersect. In this episode, we learn that BuyMore co-worker Jeff Barnes is a former Missile Command champion from 1983. To everyone’s surprise, this has made him the target of a global terrorist and Chuck has to protect his friend without revealing his CIA connection. Eventually, we discover that Missile Command contains the codes to actually control a missile platform and that Chuck has to beat Jeff’s old world record in order to prevent global catastrophe.

Chuck vs. the Gravitron (8): At this point, I realized that I could have picked almost every episode from season two. This was easily the most consistently entertaining year for Chuck. I particularly enjoyed the Jill trilogy in which Jordana Brewster played Chuck’s ex-girlfriend. The storyline combined great character moments and wonderful plot twists. The final episode in the arc, Chuck vs. the Gravitron, contains a very memorable scene of Chuck and Jill on the Ferris wheel. There’s a lot of tension as the audience knows things that the characters don’t and there’s plenty of heartache for the same reason.

Chuck vs. the Delorean (10): One of the best things about Chuck was that it was fun. That seems to be out of fashion these days, when dark shows like Mad Men and Breaking Bad get all of the acclaim, but that humorous side helped Chuck craft its own identity. In this episode, we learn about Sarah’s mysterious past when her dad, a con artist played by Gary Cole, arrives and embroils the team in a con against a sheikh with possible terrorist ties. The con and the upside-down relationships resulted in a trunk full of funny moments and lines.

Chuck vs. Santa Claus (11): The character Chuck is a geek everyman for geeks everywhere. The show Chuck played up those connections by offering numerous tributes to fan favorite shows and movies of the past. This Christmas episode included a hilarious send-up of the original Die Hard movie. Yet, more than that, this episode showed how the series was able to use humor and tension as dramatic counterpoints. At the end of the episode, Chuck watches Sarah kill a terrorist- a shocking moment that shatters his impression of her.

Chuck vs. the Suburbs (13): The writers on Chuck had a lot of fun playing with the “will they or won’t they” angle of Chuck and Sarah’s relationship. In this episode, Chuck and Sarah go undercover as Suburban newlyweds. The scenario offers a possible preview of their future to come. It exposes Chuck’s interest in Sarah and reveals Sarah’s reluctance to be committed to any relationships. It also results in a major moment for the show as this particular suburb is a front for the terrorist organization Fulcrum, once again combining romantic comedy with serious spy tension.

Chuck vs. the Dream Job (19): Chuck was building a reputation for great guest stars but they outdid themselves in this episode with two classic actors in two memorable roles. Scott Bakula appears for the first time as Chuck and Ellie’s long-lost father. And Chevy Chase appears as a computer executive who wants to woo Chuck away from the CIA. This episode contains surprising revelations and difficult decisions, making it an engrossing example of Chuck at its best.

Chuck vs. the Colonel and Chuck vs. the Ring (21 & 22): The final episodes of season two were a heart-racing affair. Chuck and Sarah are finally ready to declare their love for each other and run away from the CIA. But they’ve picked the worst possible time. The CIA is looking for them. They’re looking for Chuck’s dad. And Ellie is planning her wedding to Awesome. The contrast between Chuck’s spy life and family life has never been stronger. Plus, Morgan begins to step to the fore. He’s slowly been growing from comic relief into an important character and in this episode, he surprisingly saves Ellie’s wedding from disaster. We’re also treated to the much-anticipated return of Jeffster!- Jeff and Lester’s awful band that first appeared in Chuck vs. the Best Friend.

That should do it for part one. Come on back for part two and the best of seasons three through five.

I was a belated fan of Chuck -- I didn't start watching it until halfway into season 2. I loved it. It didn't always strike the right balance between the spy life and the work life -- going into seasons 4 and 5, it really became increasing difficult to justify the Buy More stories -- but I liked that it kept at it.

I'll probably have more to say in Part II of this essay, as most of the ones mentioned here I haven't seen, but "Chuck vs. the Colonel" and "Chuck vs. The Ring," with that wild firefight during Ellie's wedding, hit the mark. Of course, an outgunned Sarah would be resourceful enough to go searching through the wedding gifts for knives! Of course, Jeffster! would be so loud, nobody at the wedding would even know about the battle next door! Of course, Casey and the Marines would save the day! And, of course, Chuck would make it right with a wedding that was even more perfect than the perfect wedding.

Thanks for the reply, CK.  It's interesting how different scenes stick with us.  Also, it's definitely worth checking out the first season and a half if you haven't yet done so.