The Post carried 43 strips in 1997. This is the first year the poll was conducted entirely by phone. Consequently, participation dropped to around 12,500. Even so, that is many times greater than any other non-comics-related reader participation effort conducted by the paper. Reasons cited for the drop included long distance calls and the fact that some people didn't have access to touch-tone telephones. Reasons for the making the change in the first place included accuracy and time. Just opening the envelopes was time-consuming, plus all of the paper ballots had to be manually entered into the computer.

Beyond that, the format was the same as in previous years: five favorites, two least favorites and the opportunity to make comments. In the article announcing the poll, the paper's deputy managing editor referred to the Post's comics section as "what we think is one of the best comics pages in the United States." That line is highlighted in my copy, and I used it as the basis of my rebuttal/response. At the time, as an analyst for TWA, I made full use of my flight benefits. Whenever I flew (standby) on Sundays, I would often find discarded Sunday newspapers from all over the country in the boarding area. Whenever I did, I would save the comics sections, which are still in my files. In addition, I was a regular reader of Comics Revue at the time, and editor Rick Norwood would often run letters from readers across the country regarding which strips were printed in their Sunday sections and at what size. I remember thinking that the above comment was pretty safe for the editor to make because most readers don't have a basis of comparison. As a frequent traveler and a readers of Comics Revue, however, I felt I was in a unique position to respond. (I remember saying, "You may think the Post's comics section is among the best in the country, but...".) None of my comments were printed.

1. For Better or For Worse

If the Post had used weighted voting (or "ranked choice voting" as it is called today), Dilbert would have been #1. The top three had more-or-less universal appeal, but Foxtrot and Dilbert scored highest among voters age 13 to 17 and 18 to 34. Foxtrot specifically was #2 among those 12 and under, but only 26th for those over 55.

I don't have a record of either my votes or my mom's votes in '97, but I do have a list of the 19 strips (out of 43) my mom read then, presented here in the order they were ranked by the Post's readers. Her choices were pretty randomly dispersed, from #1 through #40.

Moved to color page: Baby Blues (the Post ran some daily comics in b&w, some in color)

Gasoline Alley: My mom circled it in red and wrote, "One of my favorites!!!" (with three exclamation marks). It ran for a long time in the St. Louis Globe-Democrat before moving to the Post when the Globe went under, but it finished 40th out of 43 in the poll. It originated in the Chicago Tribune, but even they had dropped it a few years prior.

Tommy was supposed to have been the new Calvin & Hobbes; I don't even remember it.

Zits: According to King Features Syndicate, Zits was picked up by more new papers than any strip it has offered since Hagar the Horrible in 1973.

Magic Eye: My mom circled "Out are Magic Eye..." with her red pen and wrote "Yeah!" in the margin. the Post knew all along that it was a fad, and the fact that it slipped from 17 places to #38 confirmed the fad was over.

Beakman was a spin-off of a television show and offered science lessons to kids. Like Magic Eye, it wasn't really a comic strip.

Tommy was supposed to have been the new Calvin & Hobbes; I don't even remember it.

I'd never heard of Tommy, and it's so forgotten that the only reference I could find about it was on the Strippers Guide blog* in an article titled, fittingly, "Obscurity of the Day: Tommy."

Cartoonist Jay Martin went on to be a director of music videos and storyboard artist for feature films (including Amazing Spider-Man 2).

* "The Stripper's Guide blog discusses the history of the American newspaper comic strip," it tells us, helpfully.

What a neat site!

I do kind of remember that strip now... vaguely. As the article points out, it really does have more in common with Little Nemo than Calvin & Hobbes. The only other thing the Post's deputy ME had to say about it was, "Even changing Tommy's dream-master's costume from black to white didn't help." (To me he looks like Venom.) Like Allan Holtz, I think a collection of this strip would be interesting.

The other link you provided (for today's post) featured "Our Own Oddities" which I definitely remember! It didn't appeal to me much when I was very young, but I always read it. Now I really appreciate the art and format. I had no idea it originated in St. Louis. You made my day!

DATELINE: 1997: For Better or For Worse Update

The Post launched its 1997 comics poll in September. When the ME announced in the results that FBoFW slipped into the first place slot, he also mentioned, "There was only a little grumbling about some of the strip's social commentary, including an occasional appearance of a gay character." Then, on August 15, the Post revealed that they had been notified by Universal Press syndicate in a letter dated July 22 that an upcoming four-day sequence (to run Aug. 20-23) was going to deal with Lawrence's partner, Ben, mulling over a move to Paris to study piano.

In 1993, 13 newspapers cancelled the strip and "at least 25" requested alternates to be run in their place. The Post announced that it would be running the strips. (When Michael stole a pack of cigarettes on a Monday, the Post received so many complaints that day that they took the unprecedented step of running the rest of the week's worth of strips on Tuesday.) I don't have any clippings about the fallout from this decision, but remember that stick I mentioned regarding the 1993 incident?

By 1999, the Post was carrying 39 comics. It launched its poll on October 3, but for some reason I don't have the results. In addition to the poll itself (this year being conducted by the features editor), that Sunday's A&E section had an article by the Post's art critic about the history of comics strips as well as a related column by the readers' advocate.

MY MOM'S VOTES: I don't have a record of my own votes, but my mom marked up the paper with hers (as was her wont) before handing it over to me. She marked the ones she read with an "X" and her top five with a check. I won't bother listing all 15 she read at the time, but here are her top five (in alphabetical order because they're not ranked: Family Circus, For Better or For Worse, Funky Winkerbean, Hi & Lois and Mark Trail.

The "Readers' Advocate" column was about 25-year-old cartoonist Aaron McGruder's new strip Boondocks, which the Post carried since its debut on April 19. By October, it was being carried by more than 200 newspapers. The readers' advocate said, "The response to Boondocks far overshadows that of any other single strip. And the volume of comments seems in direct correlation to Huey and Riley's attitude and anger." She didn't provide any direct reader quotes, but I imagine they were along the lines of those regarding For Better of For Worse in 1993 and Terry & the Pirates in 1995. (Remember that stick.) She further suggests, "Today in the A&E section you get a chance to, in effect, talk back to Huey, riley and his creator, McGruder, through our comics poll."

I wish I had those results. Mom of Earth-J reads the Sunday funnies to Jeff of Earth-J, May 1967 (above).

Almost seven months after the last time, yesterday the Beetle Bailey strip had another regular female soldier, in this panel: 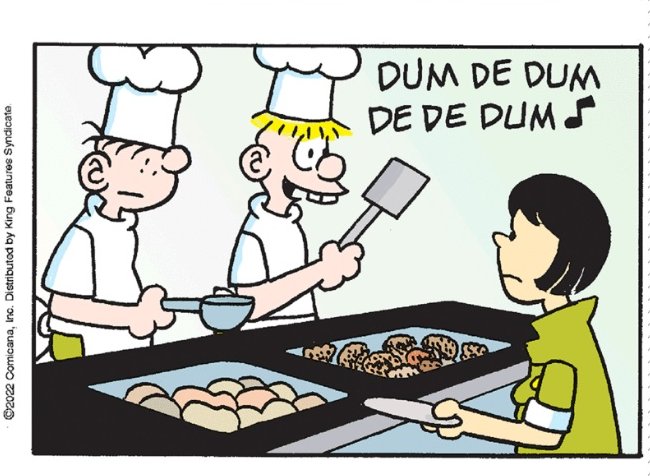 This time there were no idiotic comments about it.

Many daily strips are recognizing Charles Schulz' 100th birthday today. You can see today's strips whether or not you are subscribed.

I just caught up to Saturday's paper. These are the strips (of 29) which did not participate:

The Buckets did a two-day tribute, Saturday and Sunday.

It always bothers me that when the newspaper cartoonists do stunts like this, there usually isn't a place to see the entire collection. So it is with this tribute to Charles Schulz on the 100th anniversary of his birth.

Luke Blanchard replied to Jeff of Earth-J's discussion Tales to Astonish
"Lee had Kirby redo parts of the cover of  #101."
1 hour ago

Randy Jackson replied to Captain Comics's discussion Bond #4: 'Diamonds Are Forever'
"I do agree with you Commander that the Moore films tended to be sillier and relied more on stunts…"
11 hours ago

Philip Portelli replied to Steve W's discussion A Cover a Day
""Not only that but your feet stink! Wear some socks next time!""
12 hours ago

Jeff of Earth-J replied to Jeff of Earth-J's discussion Tales to Astonish
"THE INCREDIBLE HULK #102 - "Big Premiere Issue!" The conclusion of this story takes me…"
13 hours ago

Lee Houston, Junior replied to Steve W's discussion A Cover a Day
"I guess medical comics can cover many genres. (Image courtesy of the Grand Comics Database.)"
14 hours ago

Steve W replied to Steve W's discussion A Cover a Day
"Allow me to introduce another nurse. Here's Linda Lark."
14 hours ago

Irma Kruhl replied to Steve W's discussion A Cover a Day
"I loved the Mary Robins RN serial, with all that great John Romita Sr. art. The Mary Robin stories…"
15 hours ago

Jeff of Earth-J replied to Steve W's discussion A Cover a Day
"Before someone beats me to it..."
15 hours ago