In fact, he makes that point at about 2:15 in last year's video:

A  middle-aged guy who looks like my father, wrapped in a blanket that a friend of a friend made for him. 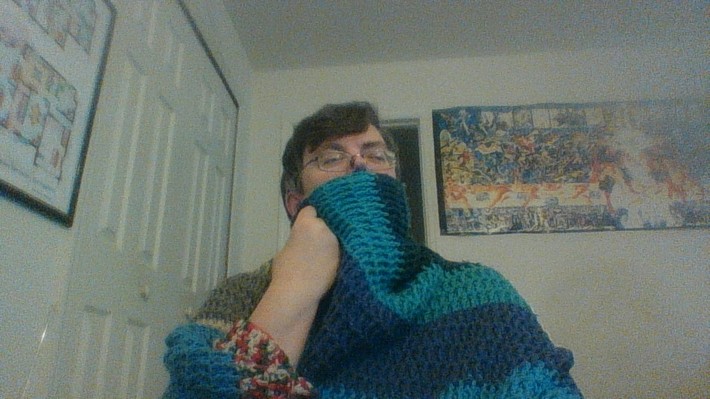 She might have had a fit but she could be mean.

Call it whatever you want as long as you appreciate it. That's my opinion.

She is but there are some behaviors we don't miss.

You don't crotchet them.

You needn't worry, though; my mom's dead now.

I'm sorry. I would never want to insult anyone's mother's memory.  It's times like this that I remember something that my own dead mother once said to me:  "Shut up, you sh*t."

You didn't insult my mother's memory.

(Sometimes I don't return fast enough to delete my own stupid posts before anyone else reads them.)

Same here, I have one that my mom created, and she called it an "afghan". I guess just one of those weird syntax things.

I believe that's the person who made mine.

Oh! "Friend of a friend." I recognize it now. Yeah, that's hers.

Next week is Pollinator Awareness Week! Bee aware of the role our pollinating friends play in maintaining the ecosystem!

I had a telephone hearing for my Social Security Disability Benefits today and the lawyer is almost positive that it will be approved. I started this process in June 2020 and after several setbacks, it all came down to a TWENTY-THREE minute phone call!

InFingers crossed for you, pal.  If it is approved, that's going ro be one hell of a backpay cheque!

I know from where you speak.  The Good Mrs. Benson filed for Social Security Disability in January of 2021, and only now is the end in sight, at least as far as the initial decision goes.

When she filed, we did what you probably did (but many, many don't)---we found the highest rated lawyer handling Social Security Disability we could locate, a fellow who used to work for the S.S.A., and retained him.  Even so, it's been a paperwork drill and a coördination nightmare getting all of the GMB's doctors to submit their paperwork.
The process was stalled at 90%-completed for so long that we finally engaged the aid of the two senators from our state.  That got action, alright---it appeared that the folks at S.S.A. started the process all over, again.
But, finally, the GMB's package has been sent to the board's supervisor for review.  According to our lawyer, that means a decision by mid-July.  And, in his experience, he believes her disability will be approved on the first look, thus avoiding the need of a hearing.  I hope he's right, but we're prepared for the long haul.
Good luck with yours, my friend!