Here are three variations with the Blackhawks (images from the GCD): 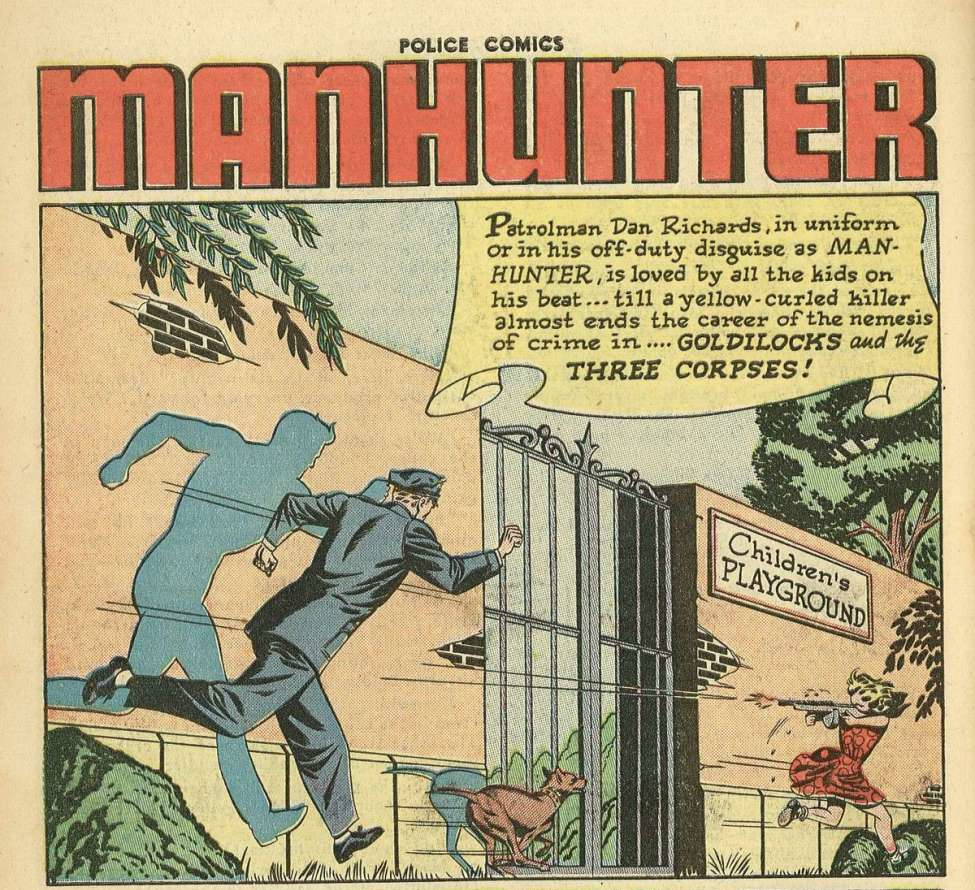 From Police Comics #82 (Quality, 1948), from the scan of the issue at Comic Book Plus. The GCD ascribes the art to Alice Kirkpatrick.

I think Chop-Chop is reaching to form the handhold for the throw in the first panel. The GCD attributes the pencils tentatively to Reed Crandall, and the inks to Chuck Cuidera.

Blackhawk in panel two looks an awful lot like a Wally Wood swipe.

The Golden Age of Comics: Racist caricature and dwarf-tossing!

I think Chop-Chop is reaching to form the handhold for the throw in the first panel. The GCD attributes the pencils tentatively to Reed Crandall, and the inks to Chuck Cuidera.

Blackhawk in panel two looks an awful lot like a Wally Wood swipe.

1949 is early in Wood's career. It might be the Crandall/Cuidera team was an influence on Wood.

Wood reportedly kept image files and made use of swipes. I believe Dan Adkins picked up the approach from him. The NoMan figure on the cover of T.H.U.N.D.E.R. Agents #7 is a swipe of a Blackhawk figure. I can't remember where I saw this pointed out. This splash panel looks like the source: 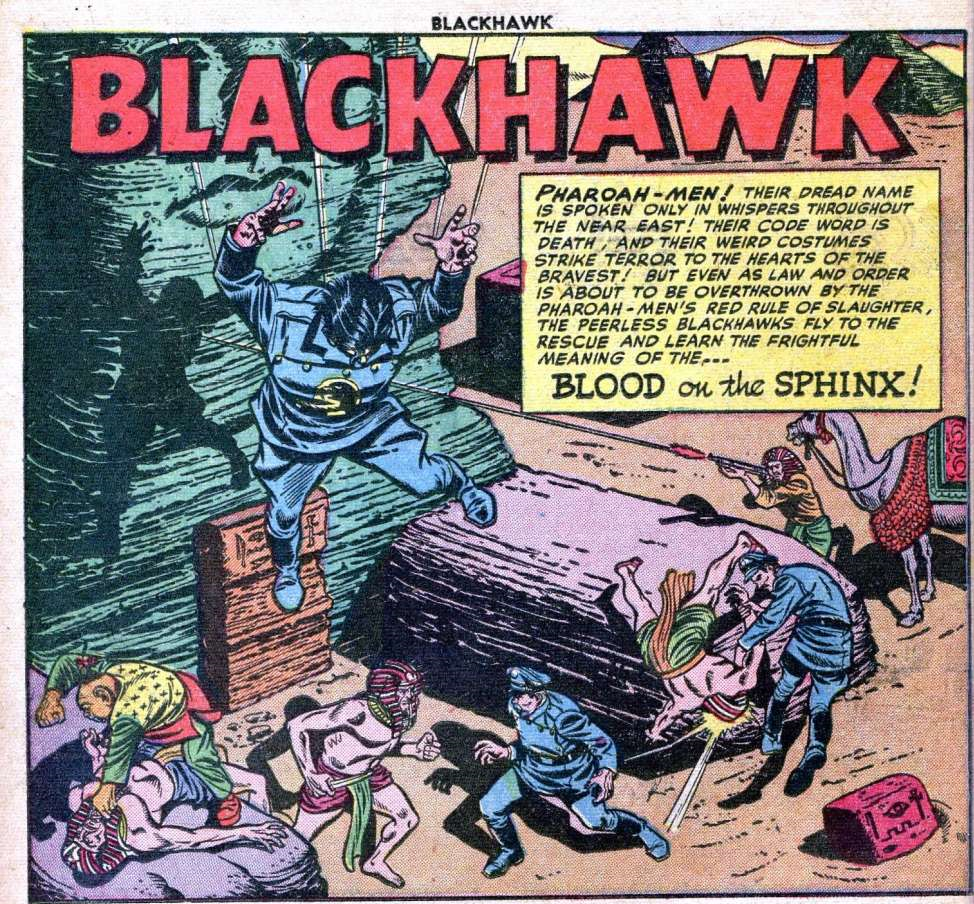 The story is from Blackhawk #52 (Quality, 1952).  The GCD doesn't have guesses as to the artists. Image from the scan of the issue at Comic Book Plus. 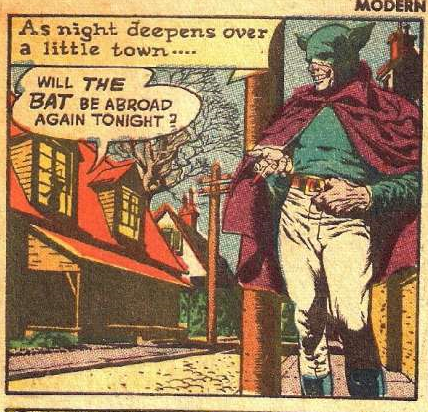 From "Blackhawk", Modern Comics #70 (Quality, 1947 [on sale]), from the scan of the issue at Comic Book Plus. Art by Reed Crandall and Chuck Cuidera. (Isn't that a gorgeous panel?)

The first of these "ripped from the headlines" tales presented a gas attack in the New York subway system that led to a cold case of a white supremacist who perpetrated a church bombing in Baltimore, based on a sarin gas attack in Tokyo's subway. The second was the Jon Benet Ramsey case. This one was the Kenneth Starr investigation.

It was kind of fun to crawl into the mental W.A.B.A.C. Machine and get back in the frame of mind I had when I saw these episodes fresh the first time ... when Detective Briscoe was still with us ... when John Munch was still on the Baltimore P.D. ... when Homicide: Life on the Street was still on the air, even in reruns (I found the second half of the story on YouTube).

It was also fun because it was the fourth time I've watched it, and I FINALLY understood the plot!

It began with a woman found dead in a New York park. Although she's been shot, Medical Examiner Rogers determines she died from strangulation; the shooting was an attempt to make it appear to be a robbery gone wrong.

Then our stalwart detectives learn the victim is a former employee of the White House, recently transferred to Baltimore. So why was she dumped in New York?

Don't ask me; I don't think I can describe it all. The story weaves from New York to Baltimore to Washington and back again, with wonderful establishing shots to let you know you are in all these places: the 27th Precinct in NYC, the old City Pier that serves as the Baltimore Homicide headquarters, the Waterfront Bar, the U.S. District Court in Baltimore, the Justice Department headquarters, the Old Executive Office Building, the White House (of course) and, God help us, even the Watergate building!

And the plot makes use of each show's history and continuity. From Law & Order, New York County Executive Assistant District Attorney Jack McCoy runs afoul of the special prosecutor, who subpoenas him to testify before a grand jury and pulls out old dirt about one of his office flings, his disciplinary hearing over hiding a witness, even Claire Kincaid's death in a car accident and the fact that a drunk Lenny Briscoe was the passenger. And on the Homicide front, Baltimore City States Attorney Ed Danvers gets nominated for a judgeship, but loses it because the special prosecutor leaks information about an old assault charge against him when he was a juvenile that was supposed to be sealed. Also, Detective Rene Sheppard, in a previous episode, had a miscreant snatch her gun from her, so everybody's looking at her sideways, particularly her partner Meldrick Lewis and the other female detectives on the squad, who think Sheppard's error has everyone looking at them sideways.

Also, it was a kick to Jerry Orbach and Richard Belzer together again. They missed a bet when they didn't put Lenny and Munch in their own show. I could watch those two guys all day.

Richard Willis replied to Wandering Sensei: Moderator Man's discussion What Comic Books Have You Read Today?
"Lee Houston, Junior said: In case you're unaware of this, the Funky Winkerbean strip…"
1 hour ago

Richard Willis replied to Peter Wrexham's discussion Celebrity Mastermind - "The History of DC Comics"
"Luke Blanchard said: Famous Funnies started in 1934. Eastern Color was a printer which had…"
3 hours ago

The Baron replied to Captain Comics's discussion Bond #5: 'From Russia, with Love'
"And also explains why he looks completely different every few years.  Either that, or…"
11 hours ago

Irma Kruhl replied to Steve W's discussion A Cover a Day
"Sue and Sally Smith, Flying Nurses #54 (the last issue of the series)"
11 hours ago