It seems to be universally disliked. How often does that happen?

But is it the exception to the rule that everything they do is a hit or is public taste starting to change again? Do they have a new "big bad" planned for after they finish off Thanos?

The Claude Rains Phantom of the Opera was originally meant to be an Abbott and Costello film, and, because his father played the title character in the original movie, Lon Chaney Jr. was supposed to be the Phantom. That would have definitely resulted in a much different film than what we ended up with.

Since that version of Phantom of the Opera came out 5 years before Abbott and Costello Meet Frankenstein, I seriously doubt that story.

That's what horror host Svengoolie said on his show, and he's usually very accurate when he's not making bad jokes, like when he noted Abbott and Costello Meet Frankenstein was originally going to be called The Brain of Frankenstein, or the fact that Glenn Strange was a big Costello fan. Universal didn't make a serious Jekyll and Hyde film, but Bud and Lou met them anyway. 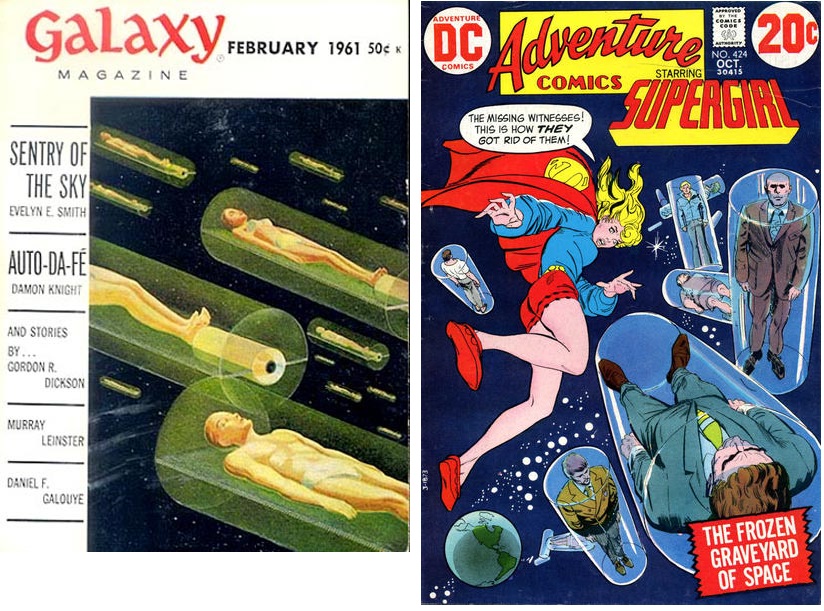 Images from The FictionMags Index and the GCD respectively. 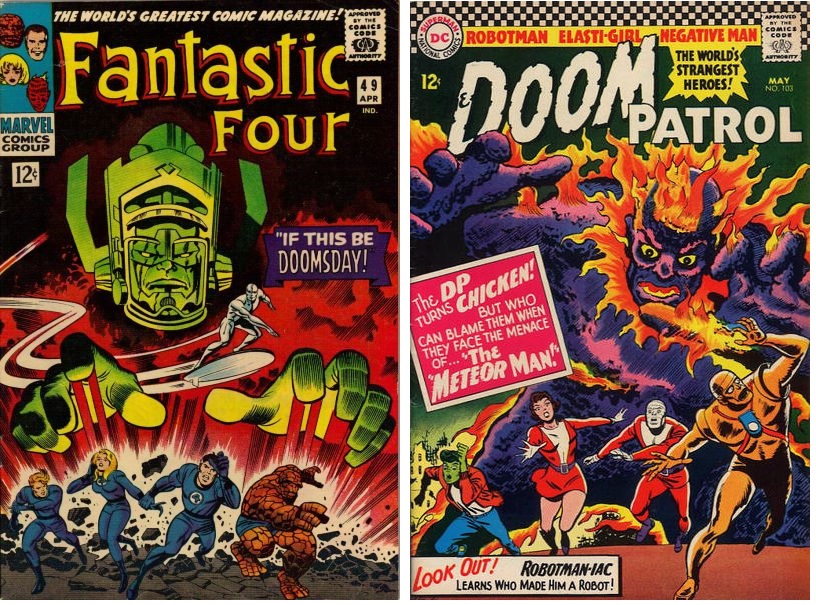 I don't doubt that these two covers were arrived at independently, but I think they tell us something else. It just shows how far ahead of the curve Stan and Jack were. The Marvel villain is a cosmic character -- maybe the second ever created, after The Watcher -- who really can make the FF run, and is waaaay outside the box for 1966. Meanwhile, the DC villain is corny and unimaginative, and the DP should be able to beat him easily. (The Avengers had already beaten something similar three years previous.) And at the time, Doom Patrol was far and away DC's most Marvel-esque book, with DP writer Arnold Drake doing his best Stan Lee impression.

But the DC book was just silly crap for kids that was quickly forgotten, while the Marvel book justly became famous.

A big difference just from the covers is Meteor Man is glaring angrily at the Doom Patrol as he reaches out to crush them, while Galactus seems bored and just trying to swat the FF out of his way. Also it's clear what Meteor Man's powers are while we don't know just what the big floating head and a hands are capable of.

I think it's a conscious imitation. The young member is on the left end, the woman comes next, and the orange guy is on the right end. Robotman's stance is similar to Reed's, and Beast Boy is hunched over and stretched out, like Johnny. In both cases there are four fleeing figures.

I don't know how covers were designed at DC at that point. The artist was Bob Brown. Perhaps Murray Boltinoff supplied a sketch.

My take on the Doom Patrol is they were modelled after the FF, but the early FF, when the series was sillier and the team squabbled a lot. Fantastic Four changed, and became more serious: the adventure became more intense, the fantastic elements more genuinely awesome, the soap opera more felt. Doom Patrol doubled down on squabbling, imitated Marvel's emphasis on action but wasn't as good at it, and became slipshodly plotted and paced. I've been reading the second Doom Patrol Showcase, and finding the lead stories close to incoherent.

Jeff of Earth-J replied to The Baron's discussion Movies I Have Seen Lately
"GOLDEFINGER: Ditto."
8 hours ago

Tracy of Moon-T replied to The Baron's discussion Movies I Have Seen Lately
"As the guy who stole the plane said, "I don't like it." Well, dude, me either. …"
10 hours ago

Fred W. Hill replied to Jeff of Earth-J's discussion The Pre-Defenders
"Ah, I forgot that little detail.  Considering that when Subby & the original Human Torch…"
12 hours ago