Also, DC published 5 issues of Captain Action (1968-1969) which was based on a toy.  From Beyond the Unknown #7-8 (1970) featured Glenn Merritt, which had its origins in a story based on Major Matt Mason, another toy.

Also, DC published 5 issues of Captain Action (1968-1969) which was based on a toy.  From Beyond the Unknown #7-8 (1970) featured Glenn Merritt, which had its origins in a story based on Major Matt Mason, another toy.

....creating a continuity problem (I know, multiverse, "comics and continuity") problem. Superman appears in Captain Action #1. However, the main plot over the first couple issues, at least, involves blue-skinned, pop-eyed, Spock-eared evil aliens from a planet in orbit around Alpha Centauri. A dam strange thing that the inhabitants of Rann never noticed that planet.


Here are some posters for the movie Beyond the Time Barrier (1960), imaged by Heritage auctions. The inset panels in a style I know from comics and magazine illustration art - more the latter - but I can't name the artist. The first panel in the second and third posters is the panel from the first one reversed. 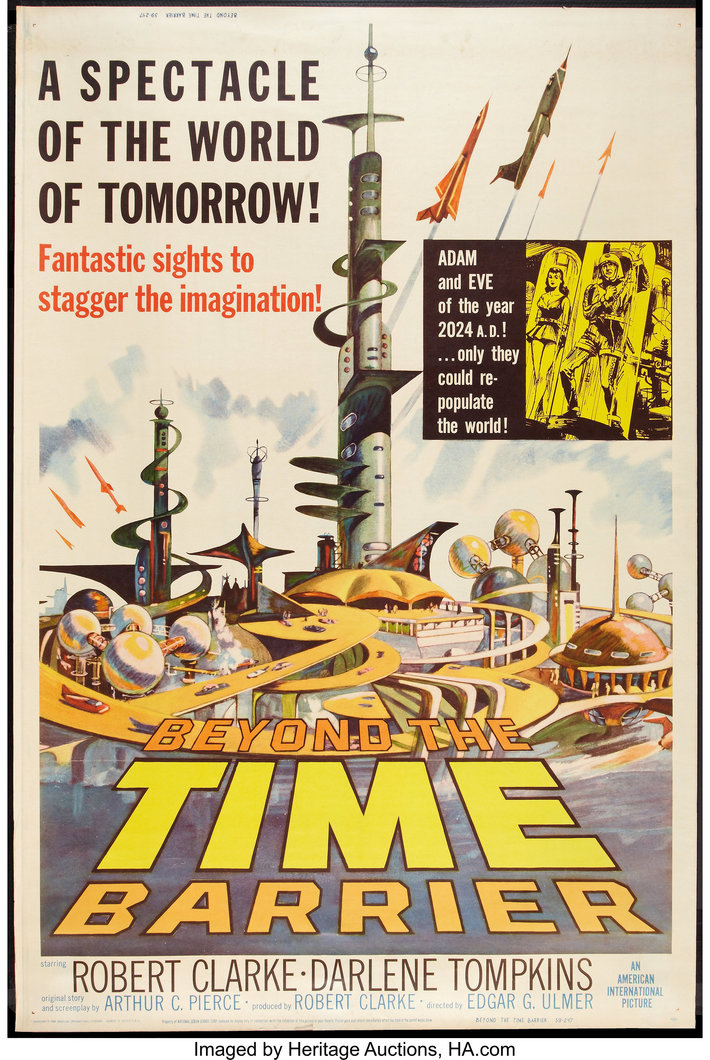 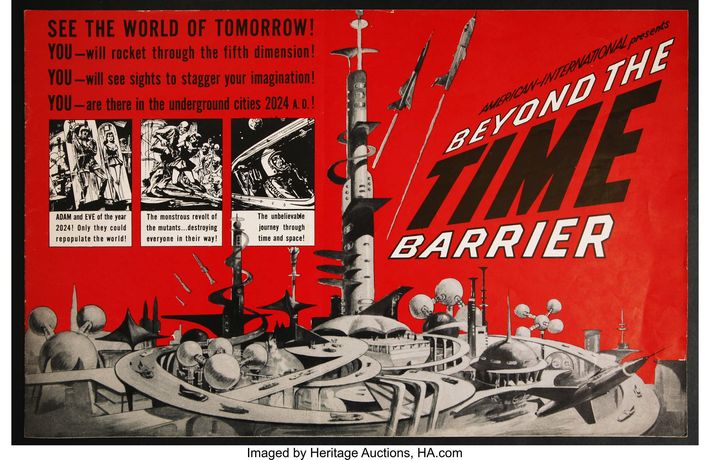 The movie is nothing extraordinary, but it's watchable and comes to a good climax. It has interesting credits: Edgar Ulmer directed, and Jack Pierce did the mutant makeup. The writer, Arthur Pierce, wrote other SF films, and wrote and directed Women of the Prehistoric Planet (1966). Arianne Arden, who played Capt. Markova, was Ulmer's daughter. The film was produced by the star, Robert Clarke, and a follow-up to his The Hideous Sun Demon (1958).

The film was distributed by AIP, but AIP wasn't initially involved in making it. Reportedly, The intended distributor went backrupt and AIP bought the negative at auction. The released version supplements the sequences with the mutants with a couple of shots of the lepers from Fritz Lang's The Indian Tomb (1959), distributed in the US by AIP as Journey to the Lost City. 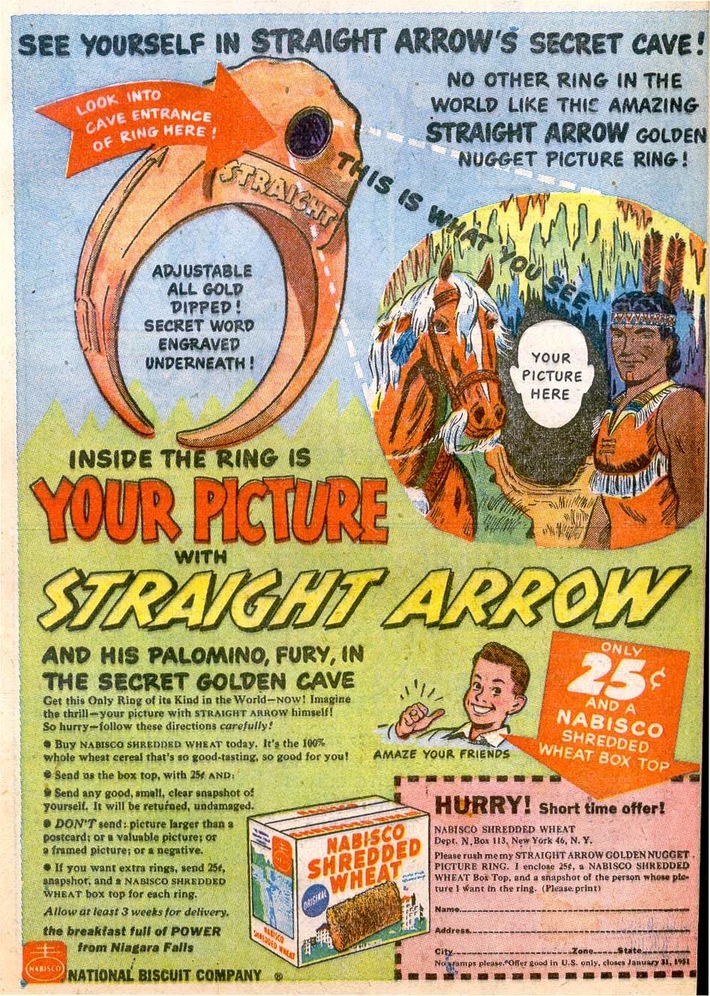 From The Adventures of Alan Ladd #9 (DC, 1951 [cover-date]). Straight Arrow was a radio hero who also appeared in comics from Magazine Enterprises. The ring-image looks like the work of Fred Meagher, who drew the comics.

A Review of Monsters by Barry Windsor-Smith

A lot about Frank Herbert and the origins of the novel

A Review of Monsters by Barry Windsor-Smith

I'm going to post this link to the "Monsters" discussion.

A lot about Frank Herbert and the origins of the novel

I've read all of the Frank Herbert ones... multiple times...

"Since his death in 1986, his son and another writer have produced a further 13 books."

...but I have never rad any of the ones by Brian Herbert and Kevin Anderson. 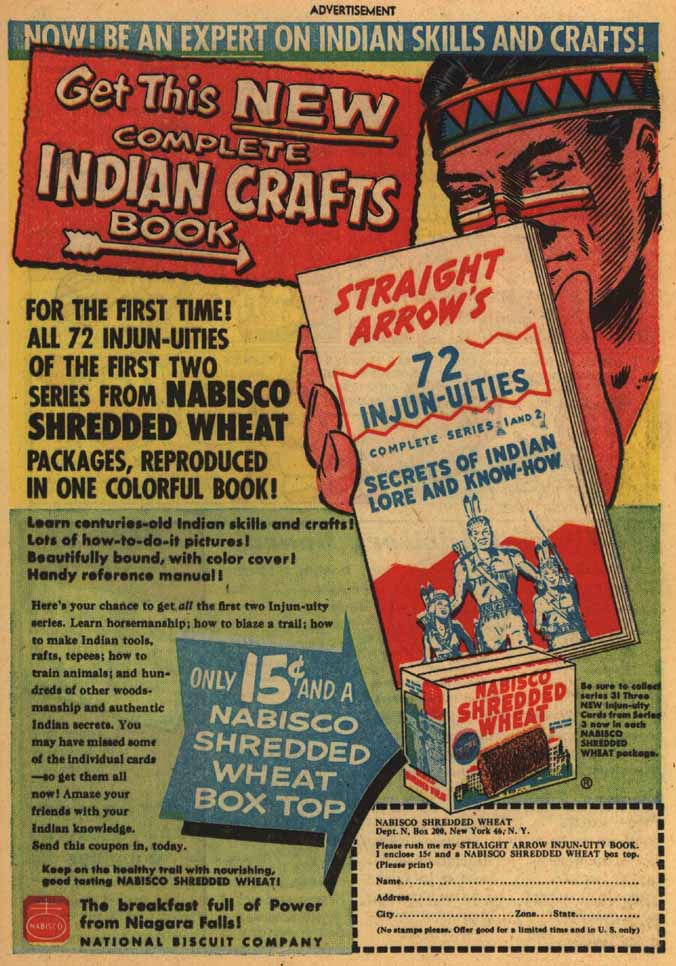 From Western Comics #30 (DC, 1951). The Straight Arrow head and book cover look like Meagher's work. The hand might be by someone else.