It looks like DC Comics are using the Omnibus format as their current way to collect classic material in chronological order.  In the past, there have been the Archives series (hardcover, full color), the Showcase Presents series (softcover, black and white, usually twice the page count of an Archive), and the Chronicles series (softcover, full color, smaller page count than an Archive).  In the past few years, all of these lines have been quietly shuttered, and now DC is releasing Omnibus collections in both hardcover and softcover formats.

As you would expect, the Omnibus hardcovers are huge.  Two Silver Age volumes collected the first 76 issues of JLA (along with Brave and Bold 28-30 and Mystery in Space 75), for example.  Earlier this year, DC released JLA: The Bronze Age Omnibus Volume 1, collecting JLA # 77-113.  That's almost half of the original series collected in this way, which for a fan like me is great news.  The JLA Archives had 10 volumes, collected the first 93 issues, and the first volume and last volume were released twenty-two years apart.  The first JLA Omnibus came out in 2014.

DC is also releasing these collections in trade paperbacks with a smaller page count than the hardcovers.  The great thing is that these TPBs collect more issues than the Archives did!  The material collected in the first JLA Silver Age Omnibus has all been released in 3 TPBs.

I wonder how many of the rest of you are buying and reading these Omnibus collections, and what you think of the format.

So, does anyone have a Marvel Masterworks Captain America Vol. 7 they'd like to get rid of? I have that series complete to present, except for Vol. 7. I could get the Omnibus, but that creates two superfluous Masterworks, plus doesn't look good on the shelf.

I've got other issues of similar nature in other runs, but it's the Cap series that bothers me the most, since it's borderline complete.

My error was that I stopped buying Masterworks when each series hit the Bronze Age. "The Silver Age is what I want," said I, "so I can stop now." But it turns out that with most series, there were better days after the Silver Age that I wanted in hardback, and one by one I started buying Masterworks again. "Just until I get through the Byrne run," I thought about Fantastic Four. "Just until I get through 'Demon in a Bottle'," I said of Iron Man. "Or maybe Armor Wars or the sentient armor."

You get the point. It took me a few years to start back on Masterworks in earnest, so now I've got gaping holes at the start of the Bronze Age in all of them. I've filled in some gaps from the secondary market, but I've still got at least one missing volume per title. Annoying.

Oh yeah, Jeff: You're doubtless absolutely correct about What If #16. They can't publish a book with a character they don't have any more in big red letters on the cover!

"So, does anyone have a Marvel Masterworks Captain America Vol. 7 they'd like to get rid of?"

Can't help you with that one. That's a run I'm perfectly content to own in MMW but not omnibus. the owner of my LCS no longer carries MMW (except for pre-orders) because they don't sell for him. My back-up shop if pretty well fixed with collections, but I'm not sure about Masterworks. I'll check next time I'm in, but I haven't been there for a year.

DC: As far as DC Archives/omnibuses are concerned, I'm perfectly content to pick up with omnibus editions where the Archives left off. (I keep Masterworks/Archives on a different shelf from the omnibuses.) Here's where my DC omnibuses pick up.

There is some amount of overlap here, but the only gap is GA Batman. there are four issues of Batman not collected in Archive editions, and I'm reluctant to buy an entire omnibus (v5) for just four issues.

If I remember correctly, Jeff, there is another gap. With Wonder Woman you (and me, as I've made the same collecting decisions) won't have the first 2 or 3 WW stories that were originally in Comic Cavalcade. I'm not sure if they've been collected in some sort of paperback, if so it'd be tempting to get that just for those stories.

Wonder Woman was the first "smart" Archive series in that it presented stories from both Wonder Woman and Sensation Comics in chronological order, as opposed to Batman/Detective Comics and Superman/Action Comics which were two series each. there was, however, a Comics Cavalcade Archive which reprinted #1-3. I'm happy with that.

The Batman/Dark Knight ones really bug me, though. A lot of the time, strict chronological order of Golden Age stories isn't all that important, but for Batman it is. Consequently I did duplicate the earliest Batman/Detective Comics in tpb format to create the real "Batman: Year One."

So, I figured I'd better go to the shelves and check it out. Unless I'm mistaken, it's worse than I thought. Assuming WW archives 1-7, at which point WW omnibus 3 nicely picks up with only one duplicate, it also starts with Comic Cavalcade 14!, which means taking into account the CC archive (which I had forgotten about) we'd be missing CC 4-13. Have those been collected into a tpb? Although I imagine I should stop being so obsessive ;-)

But I do have to ask... I've always felt that after the first couple of years the Batman stories are more or less interchangeable, and IMO fairly repetitive. Can you tell me just one example of GA Batman chronology that matters?

"Have those been collected into a tpb?"

Not that I know of.

"I imagine I should stop being so obsessive."

Great. Now you've given me something to obsess about. ;)

"Can you tell me just one example of GA Batman chronology that matters?"

I was unclear. I was referring specifically to the comics presented in Batman Archives v1 (Detective Comics #27-50) and The Dark Knight Archives v1 (Batman #1-4). Those stories are seminal and show the development of the Batman from issue to issue, story to story, so I bought The Golden Age Batman tpb v1 just so I could read Detective Comics #27-45, Batman #1-3 and New York World's Fair Comics #2 in the order in which they were released (or, as I referred to them above, "the real 'Batman: Year One"). Beyond that, I agree: they do become repetitive and interchangeable. 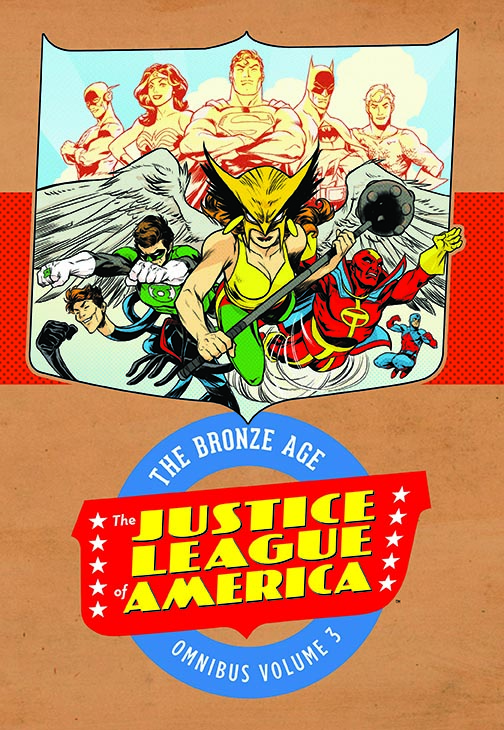 As Cap mentioned over in "This Week in Comics," Bronze JLA OMNI v3 shipped this week. I agree with him that I'm glad to see that this series is, in fact, continuing in this format, however it does render "The Wedding of the Atom and Jean Loring" volume superfluous. Another thing I'm surprised (but pleased!) to see is that the trade dress matches previous volumes.

This collects #98-123 and is scheduled to ship December 14. Wonder Woman: The Amazon Princess Archive Vol. 1 (and only) reprinted #98- 110, so although I don't buy omnibus editions until they get to the point at which archives left off, Silver Age Wonder Woman starts at that point, so I guess I'll be liquidating Amazon Princess in a couple of months.

Here are a couple of other things that caught my eye...

Permalink Reply by Doctor Hmmm? on August 2, 2021 at 9:37pm
That Invaders omnibus really has me jazzed. I loved that series when I was a kid. I reread it a few years ago and ... yep, still works for me.

It would be nice to fill in the few gaps I have. I agree it holds up well, though a little less well when Donald Glut took over.

That Invaders omnibus really has me jazzed. I loved that series when I was a kid. I reread it a few years ago and ... yep, still works for me.

So, I'm a bit slow on the trend that I'm seeing here.

I started buying Archives and Masterworks back when they first came out, and didn't stop buying them until they hit middle Bronze Age. And once I'd done that, I was really reluctant to replace them. I mean, I already had the original comic books for the most part, and often had Marvel Tales or 100-Page Super-Spectacular reprints as well, so the only way I could justify the HCs was as, uh, easy research. (Yes, nobody buys that, including me. My wife just smiles.) Also, I've wanted my favorite Silver Age books in HC form since I was 8, so there.

(I remember drawing all the members of the Legion of Super-Heroes from memory at my Nana's house when I was in second or third grade, wishing fervently I had a full run of the series in hardback because I loved them so, and also so I could take an LSH book to my Nana's house and not try to draw them from &%@#! memory. Keep in mind this was when John Forte was drawing the series, and I was tracing/drawing the Curt Swan figures from the covers alone, and there was only about 20-25 of them, tops, and "entire series" was about five or six years of back-up stories in Superboy. It really seemed do-able.)

Anyway, back to the present. I didn't feel like I should really replace research copies, though. I mean, I wanted to when the omnibus format came out, but how could I justify spending that money?

But then I did get a few Omnibuses -- mainly those that had letters page from comics I didn't actually own (early Marvel). And then I got a few from series that came out after I stopped buying Marvel/DC comprehensively ... although I'd actually already those books for the most part on Marvel Unlimited and DC Universe.

And I did need some new research books as Marvel and DC kept making movies and TV shows, right? And then when entire runs would be reprinted in omnibus -- like Master of Kung Fu -- I'd be a fool not to buy them, right?

Oh, dear. I feel so ashamed.

Because I now have a lot of omnibuses that duplicate not only comic books, but MMWs and Archives and I have no excuse whatsoever to buy them and deny my wife that retirement money. And now I'm thinking of buying stuff like the Fantastic Four omnibuses, even though I have the FF MMW through around No. 15. Just because the trade dress on the early stuff is so awful. Ditto Thor. And Daredevil. And maybe even Justice League. (I've replaced the Bronze Age JLA Archives with omnibuses. And Flash. And Green Lantern. Holding off on Silver Age JLA ... for now.)

But evidently you guys have been replacing/upgrading for a while now. I'm the slow kid in class!

How do you justify it? And what is your philosophy on replacing stuff you have with better stuff?