The just-ended, comics-based shows iZombie and Swamp Thing have three things in common:

Writer Chris Roberson and artist Michael Allred launched iZombie in 2010 at Vertigo, a DC Comics imprint, and brought it to a definitive end in 2012. It was a quirky dramedy that starred Gwen Dylan as a zombie in Eugene, Oregon, who could pass for human as long as she ate at least one brain a month – so she took a job as a gravedigger for access to gray matter. As long as she achieved her monthly dietary supplement she retained her human looks, and would occasionally access memories from the life of her meal. If she didn’t, she would go feral, like something out of The Walking Dead.

Much of that concept made it to the TV show, which began on The CW in 2015, although Gwen’s name was changed to the equally punny Liv Moore, and the action moved up the coast to Seattle. The lonely gravedigging job was also altered, with Liv assigned the white-collar, plot-friendly and equally brain-accessible occupation of assistant medical examiner for the Seattle PD.

The rest of iZombie remained on the page, including a host of other supernatural characters, such as the ghost of a ‘60s go-go dancer, a were-terrier (named “Scotty,” of course), an erudite Egyptian mummy, cat-people and a girl gang of paintball-playing vampires. Gone also was the underlying oversoul/undersoul philosophy, largely lifted from Hasidic Judaism and Transcendentalism,  which explained all those monsters and the eventual Big Bad they would all face. 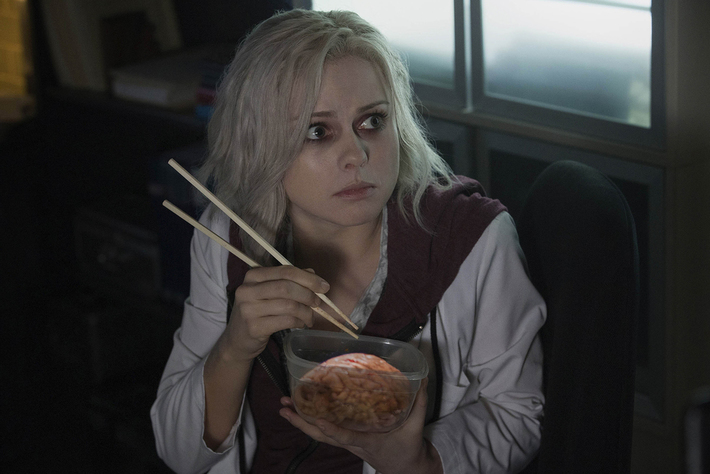 The multi-talented Rose McIver played assistant medical examiner – and undead brain-eater – Liv Moore for five seasons on The CW’s iZombie. The finale was a disappointment, but the show was unnaturally entertaining up to that point.

A loss for sure, but the TV show gained things the comics couldn’t match: an attractive and talented ensemble of actors, lighting-quick badinage, a catchy theme song and the time-honored framework of a police procedural. These were the contributions of showrunners, producers and writers Rob Thomas and Diane Ruggiero-Wright, who virtually transplanted these elements wholesale from their other popular cult hit, Veronica Mars.

But that connection also may have been the root of the show’s undoing, when Mars returned for a fourth season after a 12-year hiatus (not counting the 2014 movie). Actor Rahul Kohli, who played the delightful Dr. Ravi Chakrabarti, may have inadvertently let the cat out of the bag in this Aug. 3 interview at comicbook.com:

“What happened in Season 5 was that Veronica Mars was being made, so Rob had departed ‘iZombie,’” he told the website’s Russ Burlingame. “He was still our showrunner and he still had the same amount of control he always did, but he was focused on the ‘Veronica Mars’ series, as was our other producer, Dan Etheridge. … It became a little bit unpredictable, and I don't mean that as a negative. I just mean that now we weren't sure what the general overview was, we didn't know what the ending was. This season was probably the least informed we've ever been. John Enbom was, for all intents and purposes, filling in for Rob Thomas, and we weren't as sure what was happening week to week because they were busy just cranking out scripts and keeping us on track.”

Ouch. Kohli may not have meant that description as a negative, but it sure describes the disappointments of the fifth season, especially the seemingly rushed and poorly executed finale.

By Season 4 iZombie had expanded beyond a police procedural, revealing the existence of zombies to the public, exploding the undead population and walling off Seattle. The show became a vehicle for metaphorically exploring current events, especially racism, xenophobia and the immigration crisis. iZombie was born as a comic book at the DC Comics imprint Vertigo, but the TV adaptation quickly became its own thing.

But with no sure hand on the tiller, it all fell apart in the fifth season. A lot of time was spent on a show-within-the-show called Hi, Zombie, which went nowhere. Liv’s father was introduced as the Big Bad, who secretly zombified members of the U.S. Joint Chiefs of Staff, but he was unceremoniously bumped off and the D.C. zombies were never mentioned again. Even long-standing villains like Mr. Boss, Blaine DeBeers and Don E. came to anti-climactic ends – or just evaporated into the ether.

For example, we never see the consequences of Mr. Boss taking over the brain-smuggling operation, or Don E.’s betrayal of Blaine. We never see what happens to Dolly Durkins, the leader of the anti-zombie Dead Enders group, despite two seasons of build-up. We never learn who Officer Hunter’s baby daddy is. We don’t get closure on various quirky characters who’d had a lot of screen time, like Vampire Steve and Jimmy. Nor do we find out why the villainous Enzo affected that outrageous Pepe Le Pew accent. The show just ended, then jumped forward 10 years for the principals to more or less tell, not show, their happy endings in a massive exposition dump masquerading as a talk show.

Bleah. Well, we still have those first four seasons. They were genuinely entertaining, and if you’ve never seen iZombie, the comic panels after each commercial break (drawn by Allred) are worth your binge time all by themselves.

A similar rush job happened to Swamp Thing, and the damage started early. Even before the show joined critical hits Titans and Doom Patrol on DCUniverse.com, the streaming service announced that the 13-episode season would be cut to 10 – with no formal reason given. Then after the first episode aired in May, Swamp Thing was canceled outright – again, with no formal reason given.

Which is a shame. Despite knowing it was a dead show walking, my household really enjoyed Swamp Thing. Led by the attractive and talented Crystal Reed (Sofia Falcone on Gotham), the show was blessed with good special effects; a compelling set of characters lifted straight from the comics; the ominous, growing threat of The Rot; mysterious human villains The Conclave; and fantastic music.

It’s clear that the show was going somewhere, likely the “somewhere” already charted by Alan Moore, Stephen Bissette and John Totleben in 1980s Saga of the Swamp Thing, which remains to this day a high point in American comics. In addition, the show introduced a number of characters from the mystical side of DC’s superhero universe, including Blue Devil, Madame Xanadu and The Phantom Stranger. Other members of Justice League Dark, like John Constantine – who debuted in mid-1980s Swamp Thing – Zatanna and Deadman, probably weren’t far behind. According to ScreenRant.com, a JLD spin-off was part of the game plan. And with long-running DC villain Floronic Man premiering in all his vegetable glory in the series finale’s post-credits scene, a lot of comicky goodness had become possible. 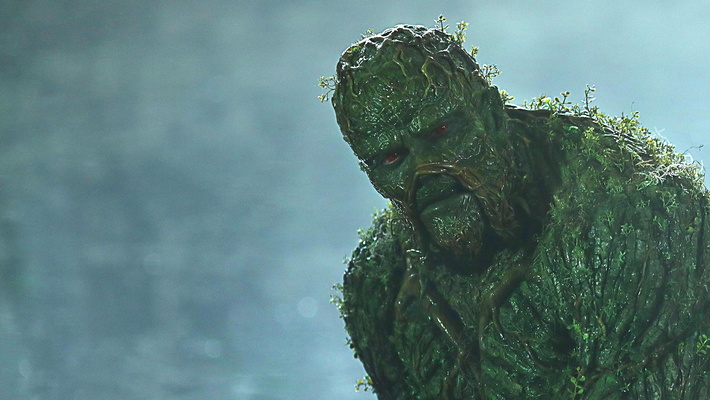 DCUniverse’s Swamp Thing had much better special effects for the lead character than previous live-action attempts, which included two 1980s movies and a 1990-93 series on USA Network.

But alas, we’ll never know. And instead of being a great set-up for what was to come, all the side trips to establish characters other than Swampy – who generally appeared less than 10 minutes per episode – are now time wasted that could have been spent on the main character.

This is a horrific waste of potential, as was demonstrated in the penultimate episode, “The Anatomy Lesson.” That title comes from Moore’s second issue of Swamp Thing, and is legendary for combining a clever re-imagining of the series with outstanding horror.  On TV, though, the speed with which Moore’s concepts were tossed off was anti-climactic – more of a summary than an exploration.

I did appreciate the “special thanks” given 15 comics creators in the final episode’s credits, even if two of them were misspelled. I also appreciate that Moore wasn’t included, because he has a long-standing aversion to his comics work being adapted to other media, and has insisted for years his name be taken off any such projects. And so it was.

Thus ends this saga of the Swamp Thing. The sets have been dismantled, the cast scattered to other projects. Like “iZombie,” it was a comics fan’s dream project that started out gangbusters but died an ignominious death.

We’ll never see Liv Moore and her friends again, which is a damn shame. But maybe Swampy will show up on The CW’s Arrowverse. Hey, John Constantine is already there! Maybe he’ll issue an invite to the Legends of Tomorrow team.

If Blue Devil, Floronic Man, Madame Xanadu, Phantom Stranger and Swamp Thing all show up, the series could be renamed Justice League Dark. The Legends would probably appreciate the upgrade.

“On TV, though, the speed with which Moore’s concepts were tossed off was anti-climactic – more of a summary than an exploration.”

On TV, “The Anatomy Lesson” could have been titled “The Vivisection.”

Yeah, this last season of iZombie was really scattershot. But the characters and their chemistry kept me coming back.