So I've been watching some Christmas movies the past few days. Netflix has a section of holiday movies so I've been see what they've got to offer. Some of them are dogs. Some are good. Then there are some movies I own I've watched was well that are "holiday" movies. Here's what we have so far with my grades.

Happy Christmas- A new-ish indy film starring Anna Kendrick (Scott Pilgrim, Up in the Air) as a aimless young  lady who visits her brother and his family at Christmas. Christmas doesn't really play a big part in this film. It has it's moments but overall I didn't care for it. C-

Christmas Bounty- A family film from WWE studios starring the Miz (does he still wrestle?). I remember this clown when he was on the WWE show with all the people trying to make it in the business. Anyways this is a goofy Christmas movie about a pre-school teacher who goes back to New Jersey to help her family of bounty hunters catch a criminal that recently escaped prison. Her unknowing fiancé follows her back, hilarity ensues, not really. C

Muppet Christmas Carol- One of my all time favorites. I'm sure you're all familiar with the Christmas Carol. This has some great moments by all the moments. Michael Caine gives a great performance as Scrooge. Gonzo and Rizzo narrating the whole thing is the highlight though. A

White Christmas- I've never seen this one before. It's a musical about two war buddies (Bing Crosby and Danny Kaye) who form a musical act. They run into two sisters who are also musically inclined who catch both of their eyes. They also try to help out their former General by putting on a big musical. I'm not a fan of musicals but this was very enjoyable. The leads had great chemistry with eachother. My only complaint was it as a little overlong and dragged at parts. A-

Kiss Kiss Bang Bang- This takes place at Christmas but isn't really a Christmas movie. Christmas is mentioned but doesn't really play a part in the story. Anyways this is a hidden gem as far as action/buddy movies go. I'm still surpsied how many people haven't discovered this. Roberty Downey Jr. and Val Kilmer star in this and turn in great performances and have great chemistry. It's directed by the guy who wrote the screenplay for Lethal Weapon. So if you like that, you'll like this. B+

Planes Trains & Automobiles- It's a Thanksgiving movie, not Christmas. I was in the mood to watch it though. Steve Martin and the late John Candy play two opposites who get stuck in a wild adventure trying to get home. B+

Die Hard- This is a controversial one. A lot of people don't think it's a Christmas movie, other do. I think it is. Unlike movies like Kiss Kiss Bang Bang or Lethal Weapon that take place at Christmas, Christmas is at the focus of this movie. The criminals plan to pull their heist at Christmas, John McClane is trying to reconcile with his wife at Christmas, the LAPD is lax and short staffed due to the holidays. No matter how many explosions or F-bombs there may be it doesn't leave your mind that this is happening at Christmas. A-

I've never heard of the first two movies on your list, but I have seen the rest.  Of those, Planes, Trains & Automobiles is my favorite.  Very funny.  We lost John Candy far too soon.

I find a lot of the newer Xmas movies are dragging and cloying, as a lot of them are formulaic romantic comedies that just happen to be set at Christmastime.  Bah and humbug.

Permalink Reply by Jason Marconnet (Pint sized mod) on December 25, 2014 at 4:12pm
I'm now watching the Preacher's Wife with Denzel Washington as angel sent to help a pastor in need. I saw this a long time ago but thought it was dull. I guess I was too young to appreciate it. Anyways it's a nice film that does a good job capturing the holiday spirit. B+ 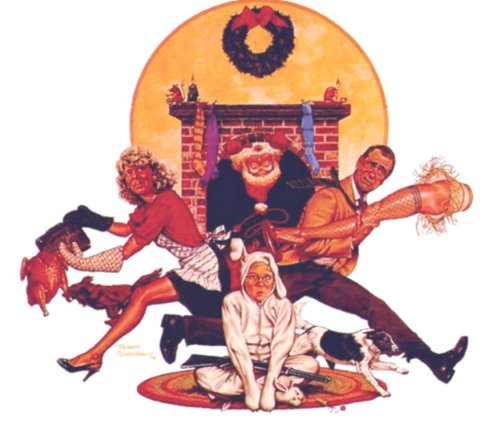 I was surprised when I finally watched "White Christmas" at how good it was. Many of the famous movies from the '40s were famous for a reason! I did have to laugh, though, that in the dance scenes Bing Crosby would basically stand in one place while Danny Kaye danced frenetically all around him -- dancing for two, you might say. Also, the first time I watched it I had to look up Rosemary Clooney and Vera-Allen to see if they were really sisters -- they looked as if they could be (they're not).

I have to say that I'm having to take a vacation from some of my favorite Xmas movies, because I've watched them too many times. "A Christmas Story," "Christmas in Connecticut" and "It's a Wonderful Life" are all on Pause List. They're terrific movies, and I'm sure I'll watch them again ... just not right now.

Thanks for the reviews, Jason -- I had never considered watching "A Muppet Christmas," but now I will!

Last year just before Christmas we saw a stage version of White Christmas. It was very well done.

I'm now watching the Preacher's Wife with Denzel Washington as angel sent to help a pastor in need. I saw this a long time ago but thought it was dull. I guess I was too young to appreciate it. Anyways it's a nice film that does a good job capturing the holiday spirit. B+

The Preacher's Wife is one of my favorites. A few years back, I saw the original, The Bishop's Wife, starring David Niven as the Bishop and Cary Grant as the angel, and I didn't like it half as much. In that version, the Bishop was a cold fish all about building a bigger church and the angel was using his powers to undermine the Bishop's marriage. The Preacher's Wife made the preacher more of a good man who was overwhelmed with his responsibilities, and made the angel smitten with the wife but kept him from going too far.

I was surprised when I watched White Christmas that it was a remake. Always wondered why Fred Astaire didn't replay the part that went to Danny Kaye. I've been watching several of Kaye's movies on tv lately, and it was annoying the way he'd turn a gag into a song that would go on and on and on. Obviously when he did The Inspector General, the term "give them the finger" wasn't offensive, but rather "smart!" I have to ojbect to his Hans Christian Anderson portrayal though. Did the filmmakers ever actually read The Red Shoes? The moral of the story was "Be good or you'll be punished until you pray for death to take away your suffering!" He did the same with The Girl Who Trod on a Loaf. Marquis de Sade must have loved his stories.