Latest 'Swamp Thing' adaptation appears to be its own animal

Moore is the English writer famous for From Hell, League of Extraordinary Gentlemen, V for Vendetta Watchmen and a slew of famous stories on major DC Comics characters like Green Lantern (“Mogo Doesn’t Socialize”) and Superman (“For the Man Who Has Everything”). One of his most beloved efforts was his run on Swamp Thing, which re-imagined and revitalized the character.

Moore began his run on the second Swamp Thing title in 1984. Prior to that the muck-encrusted mockery of a man had been an accidental headliner.

“We really didn’t think we were going to create a legend,” wrote Len Wein in the Foreword to Swamp Thing: The Bronze Age Omnibus. Wein, a writer, was the co-creator of the character, along with artist Bernie Wrightson.

Wein went on to recount an anecdote about the 1970 creation of an 8-page story that became Swamp Thing. He and Wrightson were at a holiday party at the house of DC writer Marv Wolfman, with Wrightson “suitably depressed” after breaking up with his girlfriend. Wein had already dreamed up a story that mixed romance, horror and wistful sadness, which had been accepted by his editor. He pitched the story to Wrightson, who agreed to draw it. “Swamp Thing” eventually appeared in the DC Comics mystery anthology House of Secrets in 1971. 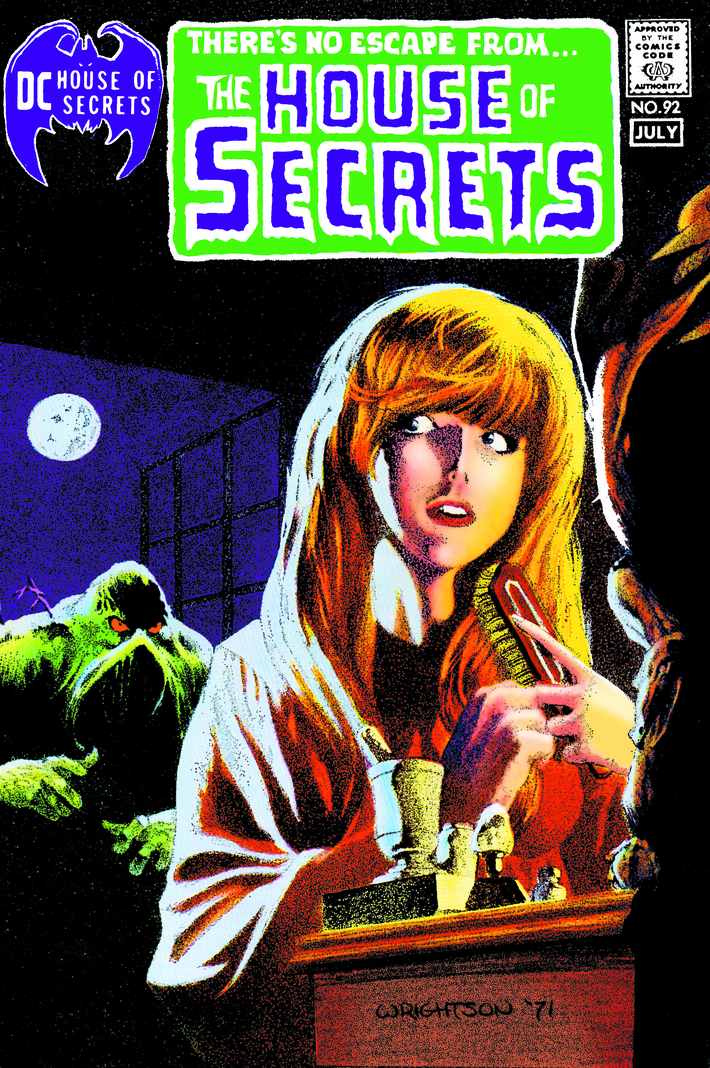 The first version of Swamp Thing appeared in an 8-page story in a mystery anthology, House of Secrets #92, in 1971.

“Swamp Thing” was told from the point of view of Alex Olsen, a young scientist murdered by his scheming partner, who longed for Olsen’s wife. Buried in the swamp, badly injured but not dead, the scientist morphed into a creature recognizable as today’s Swamp Thing. As the story began, he lurked in the swamp, watching the house where his partner lived, having married Olsen’s widow. The usual grisly revenge ensued, but it was the wife’s horror at Swamp Thing’s appearance that lent the story its weight, as well as Swamp Thing’s tragic acceptance of his new existence.

According to Wein, that issue of House of Secrets was the best-selling DC book of the month it appeared, and he and Wrightson were begged to continue the character in an ongoing series. Eventually they both accepted, but unwilling to dilute the power of their 8-page gem, created a new Swamp Thing origin. Swamp Thing #1 appeared in 1972 to suitable fanfare.

The new version of Swampy starred Alec Holland and his wife Linda, who were working on a “bio-restorative formula” in a swamp when foreign agents bombed their lab. Linda was shot and killed, but the explosion, formula and swamp combined to revive Alec as a living plant – a swamp thing. What ensued was Alec’s quest for a cure to his condition, while battling monsters as a monster.

The title had its ups and downs, even being canceled at one point. But then came Alan Moore.

Moore arrived with issue #20 of the second Swamp Thing series, and did something amazing. Many creators will re-invent an existing character that isn’t selling well. But Moore re-invented Swamp Thing and turned the strip completely upside down … without changing a single word that previous writers had established. That’s pretty hard to do!

So: Spoilers ahead for a 1984 story. If you don’t want to know what Moore did, don’t read any further.

In other words, Alec Holland was dead, and had been since Swamp Thing #1. The character named Swamp Thing was truly a plant, one who had simply operated under the delusion that he was Alec Holland after absorbing Holland’s memories via planarian worms. (Feel free to Google.)

Which meant that there was no “cure” to be had.

Which meant that Swamp Thing had no future to work for, and his past efforts had been a waste of time.

Which meant he was really, really angry. 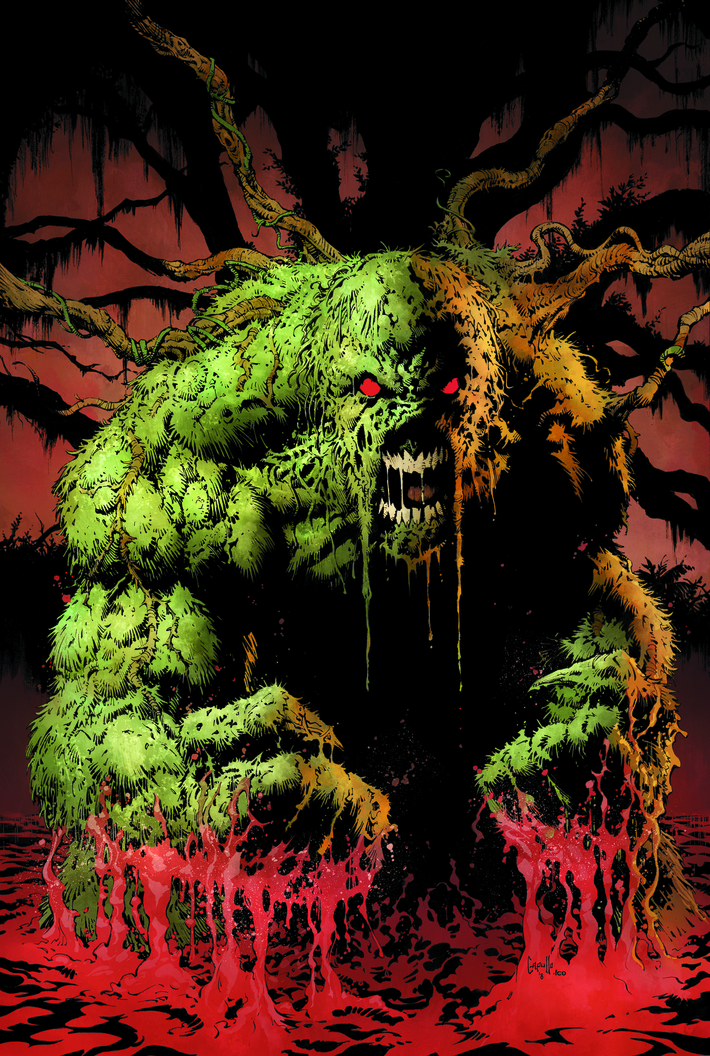 Swamp Thing is usually chill, but is pretty terrifying when he’s angry.

Moore went on to establish a new purpose for Swampy, one that was amazingly grandiose. Swamp Thing, it turned out, was the “avatar of the Green,” or plant life. Counseled by the Parliament of Trees – previous avatars who had taken root in the Amazon rain forest after their tenure ended – Swamp Thing’s job was to protect plant life from its worst threat: Man.

One interesting aspect of this was the implication that all of literature’s swamp creatures – Marvel’s Man-Thing, Hillman’s The Heap, Theodore Sturgeon’s It, etc. – could be connected to this grand cycle of avatars. DC couldn’t say so – copyright laws, you know – but the reader was free to make the connection.

This new status opened Swamp Thing to powers he didn’t know he had. For example, his body was simply a construct – he could always abandon it and grow another.  He could take his consciousness into “the Green,” the interconnected, ethereal web of all plant life, and pop up anywhere. As it turned out, he could even connect with plant life on other planets, and with some effort, project his consciousness there.

Moore told some suitably outlandish stories about Swamp Thing in space, but mainly he told horror stories about traditional monsters – monsters that he inverted in much the same manner as he had Swamp Thing. What if, for example, the monthly cycle of werewolves was connected to the monthly cycle of menstruation? What if vampires, tired of dodging the sun, simply lived underwater? Moore – abetted by the super-creepy art of Stephen Bissette and John Totleben – breathed new, terrifying life into old legends, and catapulted Swamp Thing into the stratosphere. 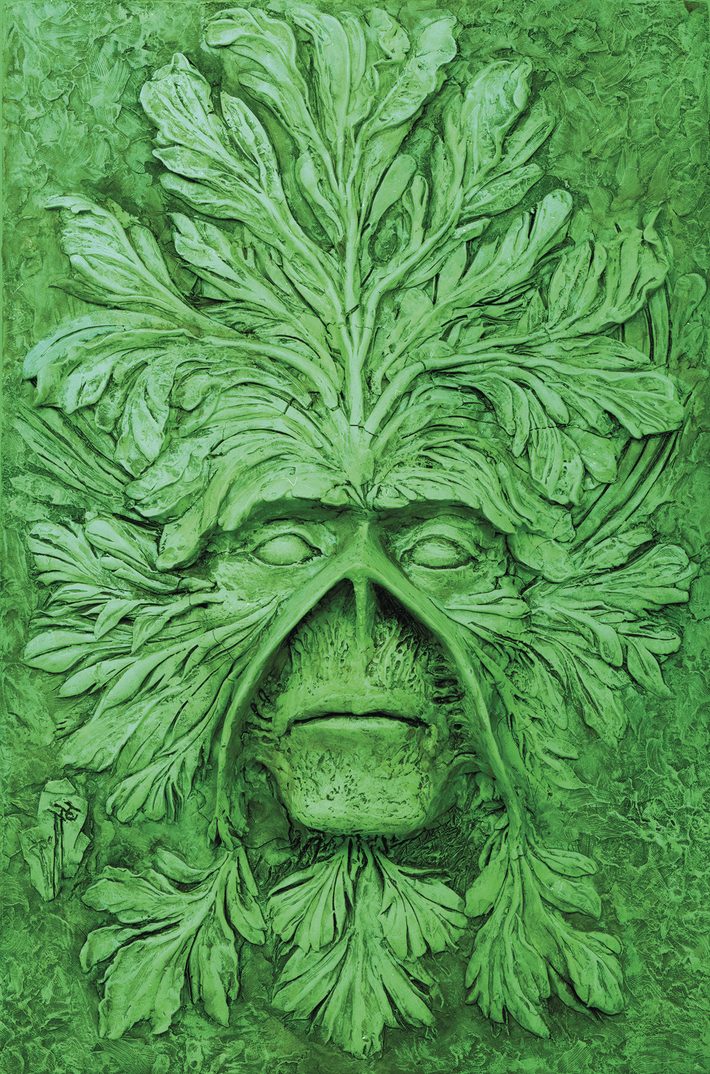 Which, strangely, doesn’t seem to be connected to Swamp Thing’s most famous iteration, the Alan Moore series. In the first episode of the new Swamp Thing, we see all the characters we associate with the comic book series, only in slightly altered ways:

Of course, all of this could be misdirection, and all the characters will shed their skin to reveal that Moore’s plots are the underlying reality. That could happen.

Or it could be its own animal. If so, it can join the previous Swamp Thing adaptations, which include a TV show on TNT, two movies and a cartoon. Not to mention the hundreds of comic books.

“All in all, not a bad record,” Wein said, “for a character who began life as an 8-page mystery anthology story.”

I have been posting about this series to the “What Are You Watching Right Now?” discussion.

EPISODE 1: We watched the first episode of the new DC streaming series Swamp Thing. Most of the main characters are in view, but they’ve been shuffled up a bit. (For example, the roles of Linda Holland and Abigail Arcane seem to have been combined.) The special effects are particularly gory. Based on the first episode, this series is more about the “horror” than the “sophisticated suspense.”

EPISODE 2: We watched the second episode of the new-but-soon-to-be-cancelled Swamp Thing on Friday. Now that the origin is past, I think it bears a stronger resemblance to the Martin Pasko era than to either the Len Wein or Alan Moore eras, but the elements have been shuffled drawing some from each. For example, there is no Linda Holland but her role in the story has been given to Abby Arcane. Abby, Matt Cable and Liz Tremaine are all locals. Cable is now a local cop and had a crush on Abby in high school. Sunderland has a wife who blames Abby for the death of their teenage daughter years ago. Alec Holland is some sort of freelance troubleshooter. The bio-restorative formula is now a a bio-accelerant invented by Jason Woodrue, who has a wife. Etc.

I suspect Mrs. Woodrue is wearing a red shirt. (Woodrue is played by Kevin Durand, who I recognize from Vikings and The Strain, so I expect he'll be a player.)

I enjoyed how they've worked in some other minor players, like Blue Devil and Madame Xanadu. Fingers crossed for Detective Chimp!

Swamp Thing picked up by The CW.

(Unfortunately, they are only showing previously streamed episodes)

There's talk of a crossover with DC's Legends of Tomorrow. So we'd see Swampy and John Constantine together in live action. Which means I could die happy.