Marvel to relaunch books in fall as 'Marvel NOW!'

The Future of Comics is Marvel NOW!

New York. NY—July 6, 2012— The most popular characters. The most acclaimed creators. The most ambitious stories. This is Marvel NOW!.

This Fall, the Marvel Universe heads in an exciting all-new direction, as the industry’s top creators join the top Super Heroes-- Iron Man, Thor, Captain America, Hulk, Spider-Man, Wolverine and more-- to deliver all-new ongoing series, each beginning with issue #1! Marvel NOW! is the culmination of Marvel ReEvolution, the groundbreaking new initiative to evolve the comic book experience through innovation.

“There’s never been a better time to check out comics than Marvel NOW!” said Axel Alonso, Editor in Chief, Marvel Entertainment. “This isn’t a reboot or a reimagining—Marvel NOW! is all about looking forward, building on our rich history of great stories and delivering new ideas.”

In Uncanny Avengers #1, the Avengers and X-Men must join forces to overcome the greatest challenge either team has ever faced, one so devastating that neither can afford to do it alone! Can Captain America’s newly assembled team find a way to peacefully co-exist while also dealing with the game-changing repercussions of Avengers VS X-Men?

Then in November, Marvel NOW! expands to all corners of the universe with launches including All-New X-Men #1 by Brian Michael Bendis (Avengers VS. X-Men, Ultimate Comics Spider-Man) and Stuart Immonen (Avengers VS. X-Men #1 Infinite, Fear Itself); Avengers #1 by Jonathan Hickman (Avengers VS X-Men, Fantastic Four) and Jerome Opena (Uncanny X-Force), on-sale in December; and New Avengers #1, by Hickman and Steve Epting (FF, Captain America), on-sale in January 2013.

“We brought fans the biggest comic book event imaginable in Avengers VS. X-Men and now we’re taking the Marvel Universe to an exciting new place, beginning with Uncanny Avengers #1,” said Tom Brevoort, SVP, Executive Editor, Marvel Entertainment. “If you’re a long-time fan, all the stories you’ve read will give you even more enjoyment of what’s happening now—we’re not abandoning our past. But if you’re a new reader, this is where you’re going to learn just why Marvel comics are unlike anything else you’ve ever read. And no character is left unaffected by Marvel NOW!.”

Every comic book bearing the Marvel NOW! branding includes a code for a free digital copy of that same comic on the Marvel Comics app for iOS and Android devices. Additionally, each issue #1 of Marvel NOW! series features special augmented reality content available exclusive through the Marvel AR app – including cover recaps, behind the scenes features and more that add value to your reading experience at no additional cost.

“This is the natural next step of the Marvel ReEvolution, as we evolve every facet of Marvel publishing,” explained Joe Quesada, Chief Creative Officer, Marvel Entertainment. “You’ve seen us craft new digital storytelling formats like Marvel Infinite Comics and bring added value to our comics with Marvel AR. Now our print comics leap into the future with a cinematic new look for our covers, exciting new designs for our biggest characters and stories that will send you on the kind of journey you can only get at Marvel.”

This October, “Join The ReEvolution” as Marvel NOW! kicks off with Uncanny Avengers #1, ushering in a new era for comics and the perfect jumping on point for new readers. The biggest creators bring you the biggest characters in the biggest stories…and it’s happening NOW!

To commemorate the historic release of Uncanny Avengers #1 on Wednesday, October 10th, participating retailers can host special advance release parties the night before! That’s right, you can experience the biggest new series launch of the year on Tuesday, October 9th at select retailers, who’ll also have limited edition giveaways exclusive to these events.

For more on Marvel NOW!, please visit www.marvel.com and join the conversation on Twitter with hashtag #MarvelNOW. 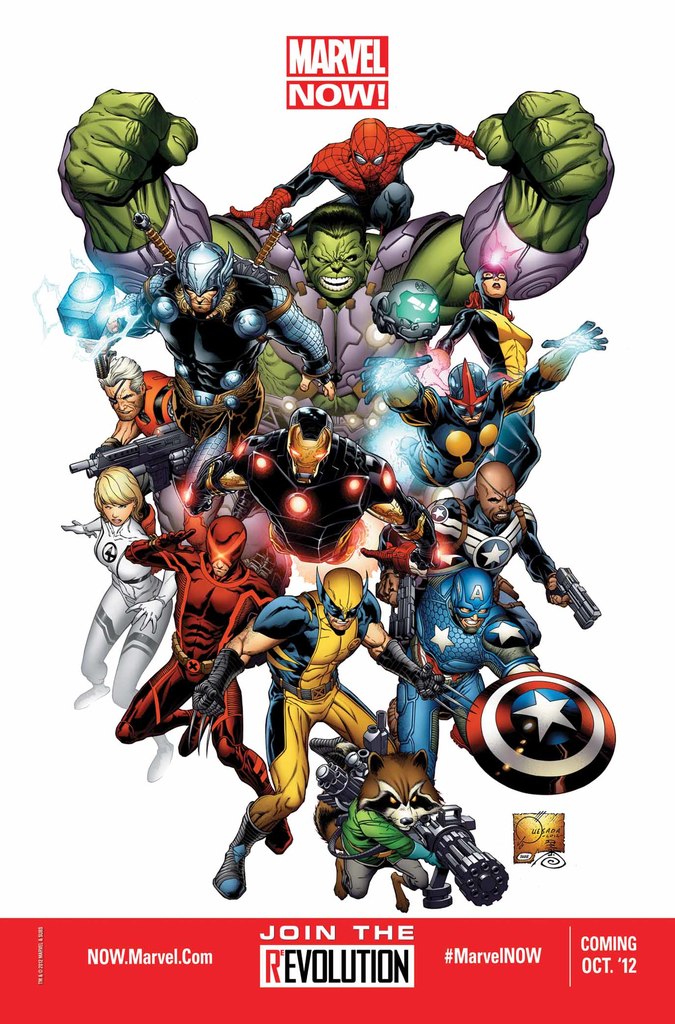 Permalink Reply by ClarkKent_DC on July 6, 2012 at 11:39am
Who's the bald guy with the eyepatch behind Captain America?

He's got to be Nick Fury. Whether he'll be linked to a WWII Nick, who can say?

From what I understand, he was established in the Battle Scars mini that just finished (I think) — he's WWII Nick's illegitimate son, also named Nick Fury, also now an agent of SHIELD, also missing an eye.

Yep, that's what happened in Battle Scars -- they established a black, one-eyed Nick Fury for the regular Marvel Universe to match up with the movies. (The Ultimate Universe, of course, already had one.) It looks like he's going to inherit Cap's "Commander Rogers" shirt, while Cap himself is going to look a bit more like the Ultimate Universe Cap -- and, of course, the movie Cap.

I don't much care for the new Cyclops oufit, but I'll grant that the new visor makes him look more like he's only got one eye, which makes sense. And I have to say I'm surprised to see him here -- I half expected him to be a casualty of AvX. With Wolverine's popularity he's unnecessary in his only real role as "Mr. X-Man," and they've painted him into a corner, character-wise (where few will ever trust him again).

* Why would the Hulk need armor?

* Is that Cable on the left?

* Looks like Hope will be a new Marvel Girl with the old one's costume -- unless that's representative of another title I've heard about, where they plan to bring the original five X-Men to the present.

* What's that floating space helmet? Looks like it has a SHIELD logo. Maybe it's the head of Richard Nixon, fresh from Newsarama.

In the current Iron Man book, his armor's black -- and it isn't Tony Stark. Maybe this is the "new" Iron Man (secretly Rhodey, whose death has been faked). Weirdly, what it looks like most to me is the Iron Man of A-Next, who had the same color scheme and was actually some sort of robot/android.

Also, I have to add that even though it's been 40 years, I still think Nova's helmet looks stupid. If anyone needs a costume change ...

Far left eyepatch guy has to be Cable. His left arm is metal - you can just see his hand, holding the gun.

The woman in the Marvel Girl costume has a glowing hand as well as a psychic forehead flash.

Why would the Hulk need armor?

To hold his pants up?

* Why would the Hulk need armor?

Do you have to scream the word "NOW!" every time you mention Marvel NOW!?

Maybe it's the head of Richard Nixon, fresh from Newsarama.

Do you have to scream the word "NOW!" every time you mention Marvel NOW!?