I’ve been thinking about posting this topic for a while now. I started actively collecting comic books in 1973 when I acquired two consecutive issues of Incredible Hulk while on a family vacation. But my mom had been buying the occasional comic book for me since I was (near as I can figure) about three years old, humor mostly.¹ I do remember having several Harvey comics when I was very young: Casper, Spooky, Wendy, Little Dot, Little Lotta, Richie Rich. I had a Disney comic or two.² I know I had at least one Pink Panther comic book in the early ‘70s.

But I don’t number any of these among my “first” comics, however. What I’m interested in are the first comics I still have in my collection and would still be willing to read, and indeed, from time to time, still do. Although I later filled many gaps and, by 1973 began buying and trading for backissues, I still remember the comic books I owned first. I know I got them all when they were new on the stands, so, to that end, tomorrow I will begin chronicalling the first 15 (or so) comics that set me on my path for life.

¹I never owned an Archie comic, although I read them at the dentist’s office.

²I recently confirmed that a story I remember quite well about the old “string tied to a wallet” prank was a reprint of a Carl Barks story when it turned up in an edition of The Carl Barks Library.

I don't mind at all! One of the reasons I put off posting this idea was because I didn't think anyone would necessarily be interested in reading about my first 15 (which may end up being more; I was going for the alliteration), but as long as y'all feel comfortable chiming in with you own choices, go for it. Me, I plan to re-read all of my choices as the discussion progresses. I haven't written my first post yet, but I hope to have it up soon.

Good grief, I'll be blessed if I remember anything that far back so specifically.

I wouldn't be able to, except I still have all of the comics I'll be discussing and I remember them as "those I owned as a kid." Once I get to 1973 I started buying a <i>lot</i> more comics, some of them I don't have anymore, plus I wouldn't be able to accurately track my aquisition of backissues. I don't know exactly how many comics books I'll end up covering, but I expect to cover the years 1967-1973.

I have a pretty good idea of the first comics that really made an impression on me.  I think it's mostly because I only got them sporadically at first. It was a rare enough occurence that each time I acquired one it seemed like a really big deal.

But, after seeing this topic last night, I decided to try to pin it down a little more by checking out the "Newsstand" feature on the "Mike's Amazing World" site.  That proved to be really helpful since it organizes comics by year, month, etc... Turns out my first comics are actually from 1974-75.

I am dealing with the first three together because they are all cover-dated May 1967. This is because King comics were sold in three-packs at the time. According to Pete Klaus and Howard S. Gesback (from their introduction to Phantom – The Complete Series: The King Years…

“King comics initially sold their books individually to stores for 12 cents and later for 15 cents. Toward the end of their publishing run, the company decided to sell sets of three comic titles in a sealed plastic bag for 29 cents. A typical ‘3 pack’ might consist of a group of action/adventure characters like Flash Gordon, Mandrake the Magician, and The Phantom or a set containing three humor comics titles such as Beetle Baily, Blondie, and Popeye. To market this new idea, King Comics displayed their ‘Three Pack Bags’ in a very attractive, and beautifully decorated box which was typically found sitting at eye level on a store counter top. Each ‘3 pack’ display box would hold about twenty five comic packs, and the idea was that this highly decorated box would help catch the eye of the buyer and act as a catalyst to sell the product, and perhaps introduce readers to other King Features characters. Even though it was a clever attempt to increase sales, the idea never really caught on. As a result of poor sales King Comics ceased production in December, 1967.”

At this point in my life, most of my comic book purchases were made by my mother and given to me later. But I remember specifically choosing this particular 3 pack. It was at a store called “Grandpa Pigeon’s” on the Rock Road in St. Ann, Mo. (I think the store is still there.) I liked going to “Grandpa’s” (as we called it). They had a plethora of kiddie rides as one walked into the store, including a single-seat “Ferris wheel” (which went to a height of about six feet) that I once tripped getting out of and chipped a bone in my arm. Anyway, I chose the three pack containing Flash Gordon, Mandrake and The Phantom. If the choice had been eft to my mom, she would have no doubt picked Beetle Baily, Blondie, ad Popeye.

Even at the tender age of three, I was already familiar with two of these characters, Flash Gordon and The Phantom, which were available as “identities” for my beloved “Captain Action” doll, which was an actual 12” doll, BTW… not an so-called “action figure,” a term which didn’t even exist in 1967. Kids my age were secure in their masculinity and didn’t need to pretend not to play with dolls. Captain Action, if you don’t know, was a doll which could become many other licensed characters by donning a costume and mask (sold separately). In addition to Captain Action’s standard fighting togs, I had the Superman, Batman, Lone Ranger and Phantom costumes, as well as a used Aquaman left behind by the neighbor boy when he and his family moved away. I knew about Flash Gordon because of a little mini-comic book included with the main doll in which Captain Action changed into multiple identities. I wish I still had that. I’d love to read it again.

My favorite at the time was definitely The Phantom. I like that the cover of #22 prominently featured his ring, which left the impression of a skull on the faces of ne’er do wells he brought to justice. Captain Action didn’t have articulated fingers, but the Phantom suit came with a little set of “brass knuckles” with a skull symbol which could be slipped over his fingers. I would buy several more Phantom comics over the years. At one point I had more (Charlton) Phantom comics from the ‘70s (like, five total) than I did Spider-Man or Superman. Just last year I read the entire run of The Phantom (from Dell, King and Charlton collectively), reprinted in eight hardcover volumes published by Hermes Press.

Although other Flash Gordon comic books had been published over the years and the comic strip continued after Alex Raymond’s departure, when King started publishing the Flash Gordon comic book, they picked up exactly where Alex Raymond left off. They couldn’t always afford Al Williamson, but luckily he was the artist on #5. I recently (like about two years ago) read all of Raymond’s comic strip adventures as well as all his King Comics stories, as well as those by other publishers. The ones drawn by Williamson are available in both a comprehensive series (from Dark Horse) as well as a Williamson-centric volume.

Titan Comics has begun a comprehensive reprinting of the Mandrake the Magician comic strip series, ad Hermes Press has reprinted all the comic books.

If I had to rank these three comics today, I’d put Flash Gordon first, Mandrake second and The Phantom (my childhood favorite) third. NOTE: Whereas I think the Phantom is a better and more interesting character than Mandrake, Mandrake #5 was a better individual issue than The Phantom #22.

NEXT: My first “Batman” comic book.

The more I look at that Mandrake cover, the more bizarre it seems.

The Mandrake comic also had a "Brick Bradford" story that I remembered as "Flash Gordon" until I re-read it recently. It was quite fanciful, about being shrunk down to microscopic size... not a unique concept, but the story had lots of visuals which burned into my memory.

My first four comics were stocking stuffers on Christmas 1972. Apparently my memories were a bit jumbled because when I thought I knew what they were, two of them were from Christmas 1973! Using the aptly named Mike's Amazing World of Comics' Newstand feature, it became clear that two other early books had to be from that Xmas! 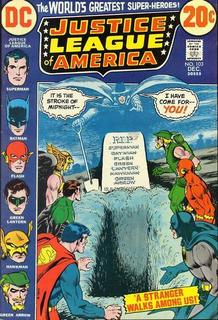 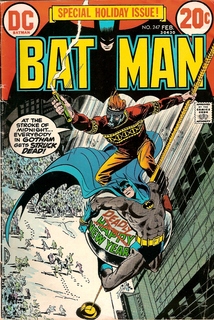 Well, this is interesting!

I decided to do some research on my first books, and it blew my first post (now deleted) out of the water. My reconstructed recollection of those days was entirely erroneous.

I think I can say with some confidence that the first comics I bought with my own money with the intent to collect were Fantastic Four #67 and Amazing Spider-Man #53. Both came out in July, 1967.

Avengers Annual #1 also came out that month, and I had it, but I don't recall how I came to have it. I remember reading it on a vacation road trip, probably to Florida, so it might have been something my parents bought to keep me busy. I literally read that book to pieces and had to replace it later when I became a Serious Collector.

Looking at the "Mike's Amazing World" Newsstand feature (thanks for the tip, 'Tec!) it appears my brother bought most of the superhero books from summer '64 to summer '66 (Avengers #5-27, for example). He continued on some DC titles into 1967, as he had subscriptions to them. (Which excluded the 80-Page Giants.) I bought his collection in the late '60s sometime, and filled in the gaps.

"...the 'Newsstand' feature on the 'Mike's Amazing World' site."

Wow, that is an incredibly useful site for unlocking old memories! I had already identified June 1973 (SEP '73 cover date) as an important month, but "Mike" reminded me of an additional three very important (to me) comics I bought that month. I thought I was going to have to give up this project after 1973, but I may change "My First Fifteen" into "My First Fifty"!

YOWZA! I am excited!

There's no way I could pull fifteen, but one of the earliest stories that I remember being really enthusiastic about was this one: 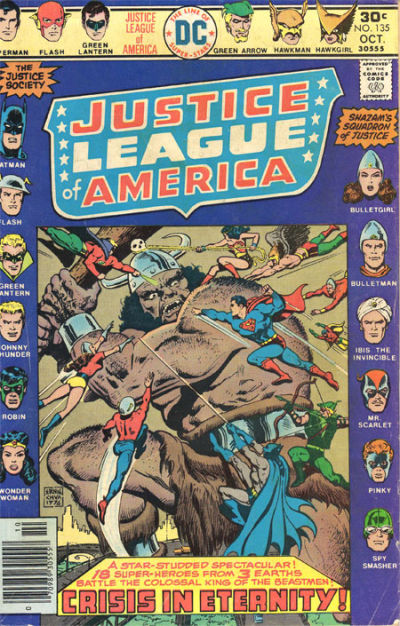