Not easy being green: The best Skrull stories from Marvel Comics

March 14, 2019 -- The pointy-eared, green-skinned Skrulls have finally appeared in the Marvel Cinematic Universe. Who are they? Without spoiling Captain Marvel, let’s take a look at the shapeshifting aliens’ greatest hits in the comics:

* “Meet the Skrulls from Outer Space” (Fantastic Four #2): The Skrulls’ first appearance was also one of their silliest. In the second issue of Fantastic Four in 1962, the Skrulls arrive to conquer our planet but decide, mysteriously, that the FF – who had been around for exactly one issue – was the biggest threat to their plans. So four Skrulls impersonate the cosmic quartet and commit crimes, so that they’d be hunted down by our own police and military.

Needless to say, Marvel’s First Family captured the imposters, and then defeated the invasion fleet. You may wonder how they achieved the latter, and I am almost embarrassed to say. Reed “Mr. Fantastic” Richards, pretending to be his own imposter, showed the Skrull boss pages cut out of Marvel’s monster mags of the ‘50s and told them Earth was chockablock with huge menaces. Showing one particularly nasty bunch, Richards said “Those are some of Earth’s most powerful warriors,” while thinking, “I pray he doesn’t suspect that they’re actually clipped from Strange Tales and Journey into Mystery!”

Gee, why on Earth would he think pictures drawn by Jack Kirby weren’t real? Anyway, the Skrulls vamoose in a panic, leaving one last problem: What to do with the original imposters? For some reason, Kirby only drew three of ‘em, so Stan Lee’s dialogue pointedly mentioned that one had left with the invasion forces. The remaining trio were hypnotized into thinking they were cows, and the last we saw of the shapeshifters, they were contentedly chewing their cud. The Skrulls first appeared in the second issue of Fantastic Four, by the legendary team of Stan Lee and Jack Kirby.

* “Godhood’s End” (Avengers #97): A famous storyline in early 1970s Avengers pitted the Kree and Skrull empires at each other’s throats, with earth caught in the middle. The Kree Supreme Intelligence – who does not look like Annette Bening, I’m sorry to say – kinda-sorta explained the Kree-Skrull War:

“For untold eons, Skrull and Kree have stalked the cosmic corridors like twin races of malevolent gods – never knowing that each of their star-spanning clans has reached – a dead end. Live a billion, billion years, neither will ever advance one more rung up the ladder of evolution. Now, they can but snarl at each other across the sea of space, hating each other – and the human race – which they subconsciously sense to be their superiors!”

Weirdly, this story contradicted Fantastic Four #2, with the fourth Skrull from the original invasion masquerading as a U.S. senator. And don’t believe that “evolutionary dead end” business either, as Skrulls began producing mutants in an X-Men story titled Maximum Security: Dangerous Planet #1 (2000).

None of which mattered much, since everything went right back to status quo for decades after Avengers #97. But who cares, since we had already been treated to several issues of the Avengers kicking alien behind – in spaaaaaace!

* “Death of a Hero!” (Fantastic Four #32): In 1963 the Skrulls invented a way to copy the powers of the Fantastic Four in a single being: Kl’rt, the Super Skrull! The FF defeated him and locked him in a volcano, as you do.

But the following year the wily shapeshifter escaped and pretended to be a suddenly super-powered and insane Dr. Franklin Storm – the father of Sue and Johnny Storm, one-half of the FF! And then the disguised alien attacked our heroes with their own powers!

Naturally, Richards sniffed out the deception, and the Super Skrull was defeated and sent home in disgrace. In a final fit of rudeness, the Skrulls returned a booby-trapped Dr. Storm to Earth, who gave his life to save the Fantastic Four. There wasn’t a dry eye in the house.

The most amazing thing about this story, though, is that Kl’rt announced the location of the Skrull homeworld, as being in “the fifth quadrant of the Andromeda galaxy”. That’s how you know their science is superior to ours, since on Earth we can only divide areas onto four quadrants. Because, you know, “quadrant” literally means “one quarter”. * “Skull Meat” (Skrull Kill Krew #1): Remember those cows we talked about before? Well, in 1984 so did writers Grant Morrison and Mark Millar, who wondered what would happen if somebody ate one of those cows. I mean, that’s what we do with cows, right? Hamburgers, steaks, Texas barbecue, etc.

Morrison and Millar decided that those three cows ended up in a variety of beef products, and that those who consumed them were infected with an alien virus that slowly ate their brains. But there’s an upside: Infected people could see Skrulls no matter how they were disguised, and gained shapshifting powers, too. Well, until they died from the brain virus, that is.

So four of these infected decided that if they were gonna go out, they were gonna go out big. They dedicated their lives to finding and killing Skrull infiltrators in the most dramatic and painful ways they could think of. (This being comics, it usually involved comically large firearms.)

* “The Monster Among Us!” (Fantastic Four #357): In the late ‘80s, Johnny “Human Torch” Storm not only romanced Ben “Thing” Grimm’s girlfriend, the blind sculptress Alicia Masters, he married her. That wasn’t exactly a move designed for unit cohesion, and times were tense. But it all worked out in 1991, sorta, when the FF discovered that “Alicia” was a Skrull infiltrator named Lyla. Yeah, Johnny’s still a snake, but the real Alicia was still in love with Ben, and the two tied the knot recently. 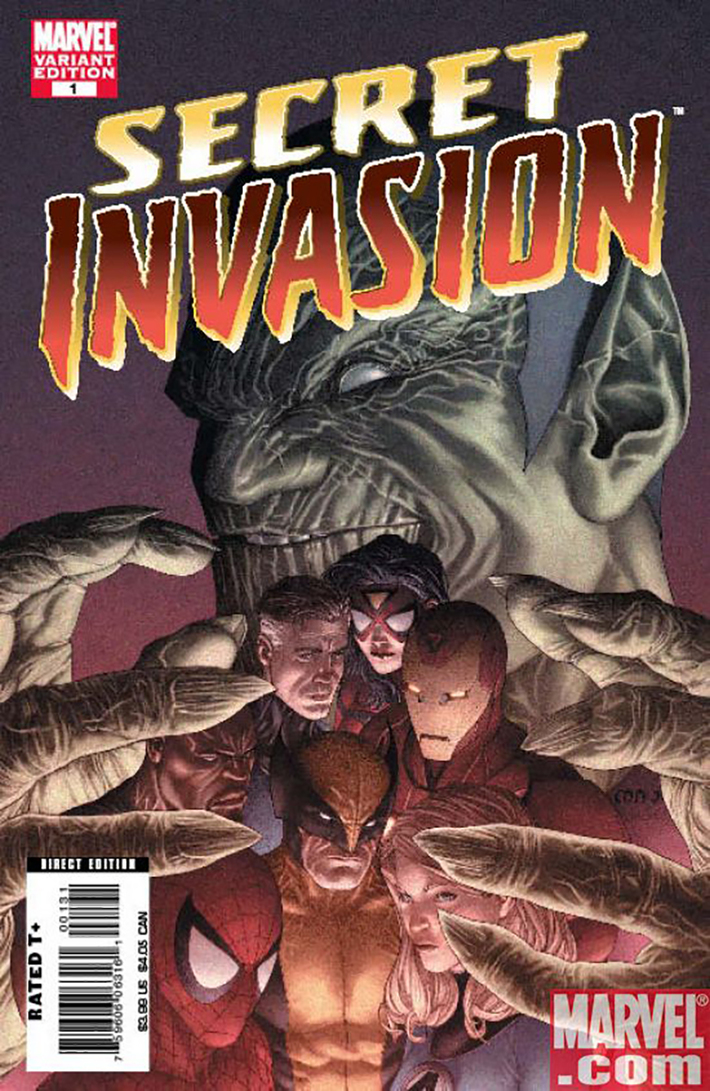 The biggest Skrull story at Marvel Comics so far is Secret Invasion, where they very nearly won.

* Secret Invasion #1-8: Insightful readers may have noticed a trend in Skrull stories: They’re always trying to invade us. One time they very nearly succeeded – and it was in part because of Earth’s heroes making a huge mistake.

While writing the Avengers books in the early oughts, Brian Michael Bendis established that after the Kree-Skrull War, representatives of major groups came together in secret to deal with extra-terrestrial threats. This shadow group, called The Illuminati, included Black Bolt for the Inhumans, Black Panther for Wakanda, Dr. Strange for the world of magic, Iron Man for the Avengers, Mr. Fantastic for the FF, Prince Namor the Sub-Mariner for Atlantis and Professor Charles Xavier for the X-Men. One of their first acts was to send a small task force to invade the throneworld of the Skrull Empire to tell them to leave Earth alone.

It didn’t go well. They were captured, and the Skrulls took the opportunity to study their super-powers and learn how to mimic them. The Illuminati eventually escaped, but the damage had been done. The Skrulls finally had the ability to impersonate superheroes.

Some time later, Elektra Natchios (of Daredevil fame) was killed in battle – and in death, reverted to her native form. All together now: “S-she’s a Skrull!” A Skrull who had been leading the ninja group The Hand for some time, and whose presence was undetected by all the means that Iron Man, Mr. Fantastic and Dr. Strange had set up to detect and deter Skrull infiltration.

In a word: Uh oh. Or is that two words? At any rate, more hidden Skrull agents began to come to light, and the Avengers, S.H.I.E.L.D. and even some criminals began working in concert to battle this global threat. It all came together in massive crossover called “Secret Invasion” in 2008, where nobody could trust anybody.

Once again, things didn’t go terribly well, given that numerous Avengers, S.H.I.E.L.D. agents, politicians, law enforcement personnel and so forth had been Skrulls for some time. One of the biggest reveals was that a Skrull had been impersonating Spider-Woman since she joined the Avengers in 2005.

Naturally, the good guys eventually won, and all the impersonated people were found and freed. Spoiler alert! But everyone’s confidence in the institutions involved in the invasion – the Avengers, S.H.I.E.L.D., superheroes in general, etc. – had been shattered. And what came to pass because of that – well, that I won’t spoil.

And for the Skrulls, it was another humiliating loss, one of many. In addition to all the failed invasions, the Skrull Empire was shattered by the Annihilation Wave invasion from the Negative Zone in 2006.  In the late ‘80s the entire race temporarily lost their shapeshifting abilities, leading to wars with the Kree, Shi’Ar and the Badoon. And did I mention Galactus ate the Skrull homeworld in 1983?

So, Kermit was right: It’s not easy being green. But those little green men from outer space have been formidable bad guys in Marvel Comics for a long time, and probably will be for a long time to come.

* “Skull Meat” (Skrull Kill Krew #1): Remember those cows we talked about before? Well, in 1984 so did writers Grant Morrison and Mark Millar, who wondered what would happen if somebody ate one of those cows. I mean, that’s what we do with cows, right? Hamburgers, steaks, Texas barbecue, etc.

I didn't know about this storyline. I thought it was wild enough when John Byrne had the cows-formerly-Skrulls giving milk that was creating a lot of problems in Fantastic Four Annual #17. Permalink Reply by Emerkeith Davyjack on March 22, 2019 at 11:12pm
...Reading that Shrill story from FF#2 recently for the first?? time in one of those TRUE BELUEVERS cheapies, I noted that Reed comes close to killing someone in a fight scene --- although just after that, he restrains Ben from killing - Reed's moment is more in the heat of. Attle, Bebn's after it's cooled down a trifle.

Permalink Reply by Emerkeith Davyjack on March 22, 2019 at 11:16pm
...IIRC, also knowing of that Byrne story and it's supposed correcting of famed-poor-memory Stan forgetting about one Smru - the story, as I recall, appeared to me to leave room for an interpretation that there was still ONE MORE Skrull!

Early on, Ben was portrayed as bitter, hostile and apparently jealous of Sue's love for Reed. Shortly, he would become tragic, sympathetic and lovable.

...Did anyone else read the one special and one regular run issue of FANTASIC FOUR, just now, that covered the Ben-Alicia wedding? One had Sue confessing that she's always felt guilty about Ben's transference to the Thing as her " I never thought you'd be a coward! " comment got Ben to override his pilot's caution and do the journey into space and because, calling him a " thing " after his transformation, she baptized him with the name. Was this the first time Marvel added this particular tealeaf to that much reinterpreted/expanded upon FF yarn?

I read them but I've never heard if Sue was ever shown expressing these thoughts before. It's an interesting angle.

...Did anyone else read the one special and one regular run issue of FANTASIC FOUR, just now, that covered the Ben-Alicia wedding?

I've never read that before, either. In fact, the revelation of Reed's feelings of guilt didn't come until the Mark Waid run in the aughts.