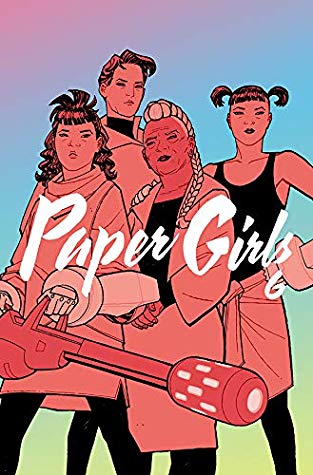 The finale of the series, so it goes without saying that Here There Be Spoilers. At the end of the previous volume the girls were split up, each sent to a different time. So naturally the story resumes by first checking in with each one of them. Erin is in our present (or something close, anyway);  KJ is in 1958;  Mac is at the end of time (with Qanta Braunstein, inventor of time travel); and Tiffany is in a frozen future. The process has somehow weaponized the girls, popping the Old-Timers' ship out of its time travel trajectory.

All of the girls want to get back to their present, of course. It begins with KJ jumping to the interstitial time the Old-Timers are stuck in. Then there is a long sequence of pages with a panel for each of the girls, showing their action simultaneously. This speeds up and clarifies the story telling, greatly aided by Matt Wilson's colors, which help keep the different times and places clear. They finally reunite in 1831--not sure why, other than it being a a neutral year, one they haven't been to before. They are joined by both warring factions from the future. The key to resolving the war comes in the form of a visual montage showing Grand Father (leader of the Old-Timers) his true history. He agrees to a truce: both sides pledge to stop travelling through time.

Before being sent home, the girls have to agree to have all of their memories of their adventures in time erased. The do this reluctantly, afraid of also losing their newfound personal connection (the mantra is "we're not just papergirls, we're friends"). There's a brief episode at KJ's bat mitzvah--which may be a dream sequence--before the girls all wake up on that fateful Hell Morning. The early morning proceeds much as it began back at the beginning of the series, with the girls banding together for protection from marauding groups of boys. Having finished their routes, they start to split up. Then at the last moment Erin convinces them to hang out a little longer as friends. It's a lovely, heartwarming conclusion: the kind of happy ending that seemed impossible until just before it happened.

Reading this review reminds me that I need to re-read this entire series start to finish.

Hey, Hallowe'en is coming up...