Cap reviewed this graphic novel back on January 19 (see p. 462 of “What Comic Books Have You Read Today?”), but it took me a while to track it down. I had a half-page of notes already written in my head based on what I thought it was, but after actually reading it I had to scrap everything I had intended to say. Yes, it is a Watchmen sequel, but it is so much more than that; it is actually a critique of the comic book field of the last 30 years disguised as a Watchmen sequel.

In the humorous creator bios, not to mention the structure of the story itself, great significance is placed on the “nine-panel grid,” but I think that’s (at least partially) misdirection. [It reminds me of when the Image founders paid “tribute” to Jack Kirby in the first issue of Phantom Force and all but one emphasized his contribution to the field as “squiggly knees.”

Anyway, the main point of the story is the extent to which Watchmen has influenced (and dominated) the field for the past 30+ years. At one point, Peter Cannon is thrust into a “mundane reality” drawn in the style Eddie Campbell used in From Hell… also written by Alan Moore and also a nine-panel grid. I’m unfamiliar with any of Charlton’s Peter Cannon—Thunderbolt stories, but apparently his origin is tied in with some mystic scrolls. It becomes clear in the context that “scrolls” also references comic books, just as “reads” did in Cerebus.

When Peter Cannon confronts his other-dimensional counterpart, he imparts the following lesson (between delivering punches): “You mastered this story—but it is only one intricate lesson. There are so many other lessons from other scrolls… so many scrolls yet to be written. In the end… this? All of this? You did it thirty years ago. Please. Let’s try something else.”

From Kieron Dwyer’s series pitch: “Saying comics can only be light or dark is just saying comics should be smaller—just a smaller you like. I’m in the Comics Can Be Anything corner—and if I have to pick a side, it’s the Comics Should be New corner.” That’s an opinion I wholeheartedly agree with and have espoused from time to time myself. I would have to review my purchases for the year, but off the top of my head this is my favorite new project of 2019… and I would have completely missed it if Cap hadn’t reviewed it last month.

Here's my mini review from a bit earlier in that thread.  I hadn't finished it at the time. I just finished it recently and found it to be really satisfying.  And I agree, it is more than a Watchmen sequel.  It's the most meta of meta comics.

Last night I read the first three issues of Kieron Gillen’s Peter Cannon Thunderbolt. I’ve never read any of the original Peter Cannon stories, but I thought this was an interesting take.

Gillen has apparently taken inspiration from Watchmen and, in a clever twist, he casts Peter Cannon in conflict with an other dimensional version of himself who appears to be based on Ozymandias (who was ironically based on Peter Cannon in the first place!). Most of this is done in the 9 panel grid motif with some pretty decent art.

The story basically spins out of the events of Watchmen in much the same way that Doomsday Clock does and even features alternate versions of the Charlton characters filtered through their Watchmen counterparts.

This is one of the few Dynamite titles I would actually recommend. 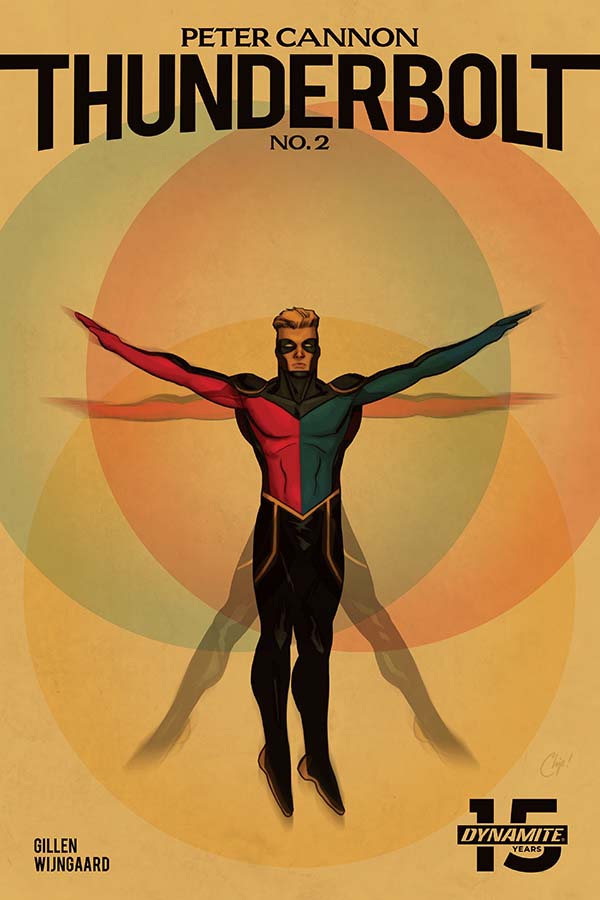 “Here's my mini review from a bit earlier in that thread.”

Thanks for moving that post over here, John. I do recall reading it now. I didn’t before, probably because Peter Cannon is a character I’m not all that interested in. I have some of the Project: Superpowers stuff and that’s about it.

“This is one of the few Dynamite titles I would actually recommend.”

Yeah, I want to like Dynamite more than I do. Not to threadjack my own discussion, but Dynamite released a Lone Ranger/Green Hornet generational series last year that was pretty good. I’m thinking about it now because I just bought a set on Lone Ranger and Green Hornet radio shows on CD which establish the relationship. I’ll be listening to them soon.

BACK TO WATCH… I was expecting an unauthorized crossover of sorts, which I tend to enjoy. For years, my favorite had been Steve Englehart’s Mantis, who he took from Marvel first to DC, then to Eclipse, then back to Marvel. More “recently” (but still, like, 20 years ago) Steve Gerber officially crossed over Howard the Duck over with the Image Comics universe. Unofficially, on the Image side of it, he moved his creation to the Image Universe “permanently,” unbeknownst to Marvel at the time.

The earlier reviews by Cap and Tec influenced me to buy the collection of Peter Cannon - Thunderbolt: Watch. Like many other things, I skimmed through it and am trying to get to it along with many other things in my pile. When that finally happens I'm sure I will have something to say.