Just for fun, I’ve decided to rank the Silver Age Legion of Super Heroes. This is my list, so if you disagree, please create your own. I’d love to see it.

Here are the guidelines I’ve set for myself for this list:

Characters will be ranked in several areas:

I’ll tell you all right now, there are gonna be some surprises.

Surprised no other teams turned up in the future. Everybody with powers just rushed off to join the Legion.

Perceived Value – 6 –  She’s a girl who can split into 3 identical copies (later 2). Useful in some very specific circumstances, but probably not who you want on your team if you’re facing the Fatal Five.

Actual Value – 7 – All things being equal, I’d say that Luorno overachieved. Despite being someone who should have been relegated to the Subs or made a Reservist, she actually served reasonably well, albeit in the limited capacity she could.

I would have loved to see Luorno higher, but there’s no getting away from the limitations of her powers. Maybe she isn’t as limited as some of the Subs, but she was definitely limited. I think she falls in the same realm as Bouncing Boy—the girls liked her because she was nice, and while she was attractive, one gets the feeling that she wasn’t necessarily a knockout, so they didn’t really have to compete with her on those terms.

I don’t think I have to spell out what the boys were thinking.

Anyway, I will say that she did her best, and that’s all one can ask for.

So anywya, that's it. That's all of them. I'm curious to hear any thoughts that haven't been expressed as yet, not to mention lists from other people.

The stickler in me---and I was worse about it 'way back when---says that Karate Kid should not be a member of the Legion.  As far as Earth folks go, Karate Kid may be at the very peak of human development in certain disciplines, but he's still within the range of human ability. Thus, he's not super-human in any respect.  And the Legion Constitution stipulates that a member must possess a genuine super-power.

Philip defends K.K.'s membership on the strength of the Kid's determination to succeed, but being really, really good at what you do doesn't earn you a place in the Legion. Otherwise, one could logically argue for Sherlock Holmes qualifying to be a Legionnaire.

I explained away the Legion's admission of Karate Kid with the same rationale that Randy has mentioned both here and before:  the Legionnaires were teen-agers, and as teens, their decisions were more influenced by social considerations than adults' are. The other Legionnaires voted K.K. in because they were impressed by his bravado, but more important, Superboy---whom the other members held in awe, like he was Conrad Birdie and they were a bunch of Kim MacAfees---wanted him to be admitted, so they couldn't say "aye" fast enough.

That said, something occurred to me as I was composing this post.  A question, really, and it's a question with an answer not as obvious as one may think at first blush.

What is a super-power?

I mean, by the fictional conceit of DC's thirtieth century.  Let me explicate.

I can see, but that's not a super-power because nearly everyone else on Earth has the ability to see.  (The unfortunate who cannot are exceptions, and we term them disabled or handicapped because their lack of sight is less than the norm.)

Cosmic Boy has the power to control magnetism, but is that a super-power?  Everyone else on his planet can do the same thing.  Certainly, to varying degrees (just as the quality of our vision varies among us Earthlings), but to the society of Braal, Cosmic Boy doesn't have a super-power.

The same goes for Saturn Girl, or any other Legionnaire who stems from a world in which everybody is born with the same "super-power".

By that perspective, the only one of the three charter Legionnaires who had a super-power was Lightning Lad, who had an ability not possessed by those of Winath as a whole.

But even a prototype definition for "super-power" as a power or ability outside of the abilities of one's race isn't enough.  Again, I can see, but let's imagine that I'm from another world where the native population has no eyesight.  I'm a member of that other-worldly race, but I was born a mutant, with the ability to see.  That fits the "power or ability outside the abilities of one's race" requirement easily enough, but there's no chance the Legion is going to let me sign up because I have the "super-power" of sight.

Now, when Mort Weisinger and his writers were fleshing out the concept of the Legion of Super-Heroes, the term super-power was meant as "something which normal Earth people cannot do", and having some of the Legionnaires possess their powers due to their alien births was just a convenient way of avoiding coming up with a new "bizarre accident" origin every time they wanted to add a new member.

But, if we look at the term super-power through the in-fiction perspective of the thirtieth century of the Legion, it was never satisfactorily defined.  So, yes, I would insist that Karate Kid did not qualify for the Legion because he did not possess a super-power, but only because we have to take super-power as one of those thing which "everybody knows what it means", and not by the more stringent definition that the Legion would logically have.

-We regard Val's abilities as within human range because he acquired them by study and training, but he could do things no professional athlete of today could do.

-Dr Strange's powers seem to be super-abilities, but he acquired them by study and training, as Val did his super-karate.

-Val could suppress his pain. This nearly killed him in Superboy #201.

-Is having been immunised against a disease a super-ability?

-Is being able to speak a foreign language a super-ability? Most of us can't.

-Lightning Lad's abilities could be duplicated by 30th century technology, whereas Karate Kid's could not.

But were there teams anyone wanted to join?

You could add the Legion of Substitute Heroes in that regard. If you were a teenager with super-powers, you wanted to join the Legion.

I think Karate Kid had to have some sort of super-power. He did feats that no martial artist could have duplicate, even during his time in Adventure Comics.

First in #360 (and I apologize for the bad image), he smashes the gate of a prison fortress! 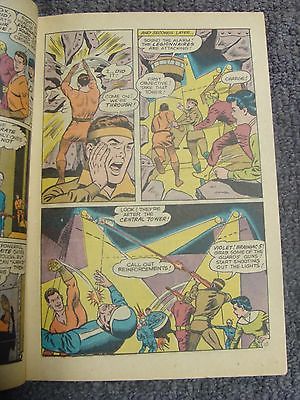 Then in #365, he shatters a diamond from the inside when he was weakened by a lack of air! That's a lot more than karate as the Kid knew fighting techniques from all over the universe!

I think we can only go with what they told us, which was that Karate Kid had no powers. I won't argue that at times he did do some things that appeared superhuman, but I don't recall any iteration of Val where we were told that he did.

Looks like he has whatever it is that Karnak has.

Thank you for putting this together. I hope you don’t mind that I made a list of your ratings to facilitate further debate.

Richard Willis replied to The Baron's discussion Movies I Have Seen Lately
"The Fuller Brush Girl (1950)Apparently, this is the last movie Lucille Ball made under her studio…"
33 minutes ago

Richard Willis replied to PowerBook Pete, the Mad Mod's discussion Anything, Everything, or Nothing At All
"From The Comics Beat (it may be even more dire): "The DCEU is fine, if by fine you mean a…"
3 hours ago

JD DeLuzio replied to Steve W's discussion A Cover a Day
"We can go gangbusters with this cover:"
3 hours ago

The Baron replied to The Baron's discussion Ultraman Manga, by Eiichi Shimizu & Tomohiro Shimoguchi (Mildy Spoiler-ish)
"Volume Eleven The Ultramen defeat the Star of Darkness.  The last surivivor is their leader,…"
4 hours ago

The Baron replied to The Baron's discussion Ultraman Manga, by Eiichi Shimizu & Tomohiro Shimoguchi (Mildy Spoiler-ish)
"Volume Ten Our heroes head to NYC, where the Star of Darkness types announce that they're…"
6 hours ago

Richard Willis replied to Jeff of Earth-J's discussion Sandman (TV)
"Richard Willis said: According to Wikipedia, the episodes have a "Running time…"
6 hours ago

Jeff of Earth-J replied to Jeff of Earth-J's discussion Swamp Thing
"ISSUE #126: An offbeat fill-in issue written by Dick Foreman in which Swamp thing aids a burned-out…"
11 hours ago