(I'll do a spoilery review later.) Saw this last night at the De Lux over to Holtsville.  I enjoyed it a lot. I was a little concerned when I heard that Hideaki Anno was going to direct it - he's brilliant, but  a little bit screwy, and I was afraid that he would put a lot of NGE type weirdness into it, but, while there were some Anno-esque touches to it, I felt that he made a good G-Film, maintaining the spirit of the previous films while trying something a little new. Well worth a view if you get the chance.

I'll be on vacation (and likely off the board as well) next week. I'll try to see it then.

I'll have to check if it is showing anywhere nearby - would really like to see it on a theater big screen.

I was just about to ask if you'd seen it, BB.

There are a couple of theaters nearby showing it, but The Lad would kill me if I went without him, and he's had such a busy 3 weeks that I can't make it work on the "1 showing per week" schedule they all are on.

Fortunately a local theater held the movie over despite the "one week only" ad tag, so I am guessing it most be drawing a decent audience. There was way too much time spent on talking heads and Japanese politics for my taste , other than that it was entertaining. The special effects were the best I've seen in a Japanese produced Godzilla film. Overall I prefer the US film of last year but if you like Godzilla it is worth seeing.

I saw it last week and I really liked it. This was the third Godzilla film I saw on the big screen. (It should have been the fourth. I really wanted to see Godzilla: 1985 at the theater but never found the time. It’s probably just as well.) The first I saw was Godzilla: 2000, then the 2014 version, then Shin Godzilla. (I should mention I also saw the 1998 American version in the theater, but that one doesn’t really count.)

One advantage Shin Godzilla had over the last version was that it got to the action right away. By the time the Big-G showed up in the 2014 version, I had nearly forgotten which movie I was watching. Shin Godzilla had perhaps too many scenes of bureaucracy in action, but even those were fast-moving. Also, Shin Godzilla] did an excellent job of showing destruction from the street level view.

Other than that, I was very impressed by the film’s soundtrack, surely the best overall of any Godzilla film so far. In addition to the expected theme and sound effects, classical, rock, jazz, opera and other styles of music were all represented. There was also a piece that sounded to me like the percussion track of a James Bond instrumental. [SPOILER] I liked the way Godzilla “evolved” by steps from a larval stage into a more recognizable form. I also noted that his theme evolved with him, which was a nice touch.

[ANOTHER SPOILER]If you want to lift the “spoiler” ban, perhaps you can explain to me the significance of those figures in his tail at the very end. I assume G. was about to spawn…? I must have missed the explanation of that.]

I don't know any more than you do about the figures in the tail. Spawning is one speculation that I have seen.

Oh, I forgot to mention that I was so impressed by the soundtrack that I ordered it online. I've been listening t it all week. It's great. 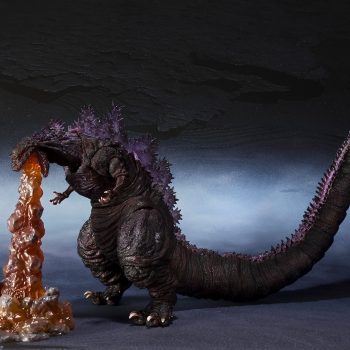 I find it impossible to believe that the guys in Product Design didn't know exactly what they were doing.

Maybe he should eat more veggies and fewer people.

Permalink Reply by Doctor Hmmm? on August 7, 2017 at 1:52pm
Now that it's available for purchase, Bob, is it worth buying? (I think we all know that I'm going to do that anyway, but I value your opinion.)