OK, there's been a lot of debate over these start and stop points for years, but I'm wondering if there's any real consensus on these point nowadays.

For an end date, I hear most fans talk about Marvel issues, of either the death of Gwen Stacy in ASM #121 or the departure of Kirby from Marvel with FF #102 or Thor #180.  I don't know if there's a similar DC point or not.

Or maybe it's the first issue of Marvel Two-On-One (sorry, I couldn't resist!)

As for the Modern Age, does it begin with the adjectiveless X-men multiple covers and five trip-tick scenes?  Or is there another point?

What do you say?

(OK, I am SO SORRY that I brought this up again... at 15 pages and growing, this was obviously a touchy subject that should have been left alone.  "Let Sleeping Dogs Lie...")

Here is the paragraph in Len Brown’s foreword to THUNDER Agents Archives Volume 6 that has what you were looking for:

“The Tower Comics line continued until 1969 when the parent company pulled the plug. I was never privy to circulation figures, but I always felt they might have been barking up the wrong tree by charging 25 cents for a comic book. Those were the days when the average comic was just 12 cents. I have since heard that Tower’s newsstand distributor had wanted a quarter comic book on the market. They felt that if the books were more profitable to news dealers, the retailers would increase their orders on future issues and eventually the circulation would climb. I don’t believe this ever happened. While comic collectors praised the editorial content, it doesn’t appear enough of them were willing to put down a quarter in those Silver Age days.”

For my own part, I felt I was getting more value in the Tower books. At the time, Marvel and DC books that went for 25 cents used reprints as filler. I was never enamored of the Golden Age reprints that were often used. Tower was telling new stories and I appreciated it.

The companies couldn’t legally get together and conspire to all go to 25 cents books. Maybe if the distributors demanded it, it would have been legal. We’ll never know.

Thank you for looking that up.

It's not always the case that a guy who wants a bag of chips would be even happier with a more expensive bag of chips that's better value for money.

Well, if all the comics had gone to what was then the 25 cent size and made the newsvendors happy (and continued to raise the prices over the years, to continue to make them happy) the U.S. might still have a diverse comic book readership instead of the narrowing marketplace that we now have. People would see comics of many genres and, having seen them, buy them. If you are lucky enough to even have a comic book store you still have to know to look for it. If you are looking for something other than superheroes when you get there, good luck. Unless the store has deep pockets they can't afford to but non-returnable comics that their existing customer base won't buy.

Luke Blanchard said:
It's not always the case that a guy who wants a bag of chips would be even happier with a more expensive bag of chips that's better value for money.

That's a possible scenario, given that European (especially Belgian) comics begin with anthologies and then are collected into albums, and the genres represented are diverse.

I was just in Brussels and was dazzled by the 40+ murals of comic-book characters painted onto walls, a giant statue on the street of Gaston Lagaffe (Gomer the Goof), and the Comic Strip Museum. We know a few of the characters (Asterix, Tintin, Lucky Luke, Valerian, Smurfs) but there are thousands in all kinds of genres that are popular. And they're all sold in comic book stores and bookstores. Here's one of five well-stocked rooms in a great store in Bruges: 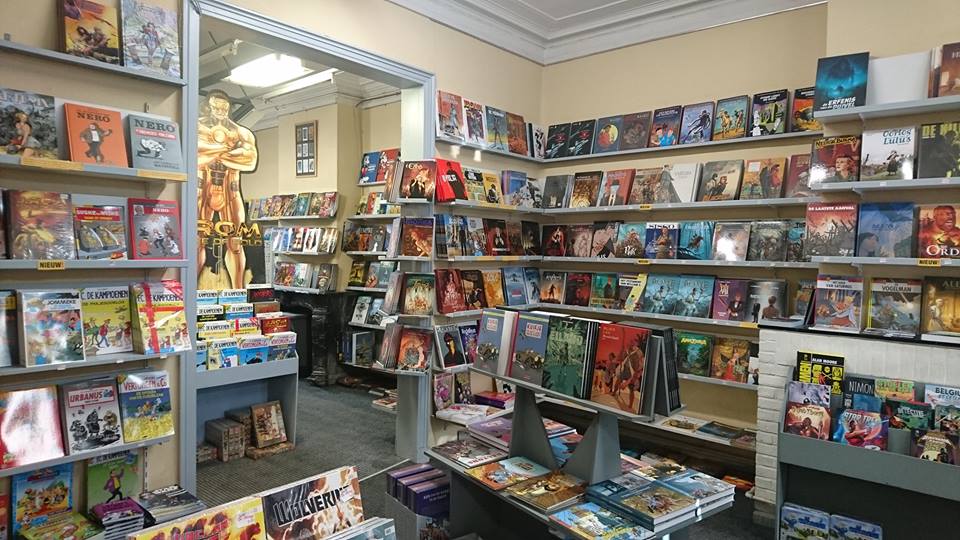 But I don't despair for American comic books, just the periodical version. Plenty of graphic novels are stocked in bookstores and kids are exposed to them through Scholastic and libraries that are well aware of them.

One of the biggest books of any kind last year was My Favorite Thing is Monsters and the biggest graphic novels of 2017 were by people we've never heard of because they were geared to middle-school kids (although I've read a lot of Raina Telgemeier books, which are fun).

So in that regard, American comics are doing better than ever. It's just not the type that 30- & 40-year-old fanboys go to a shop each week to buy. If comic book shops get smart, they'll start figuring out there's a lot of market they're missing.

I agree that the periodicals are a problem. Since the companies are constantly cancelling and starting or restarting titles they need to try what some smaller companies have done. Do the periodicals (initially jusr afew)  online only for a cheaper price and later issue the TPB for comic stores and bookstores. If the retailers get worried, too bad. What are they actually going to do about it? There will still be demand when the TPB comes out if the comic is any good, and the retailers can make money on it then.