When Jim Steranko was drawing Nick Fury, Agent of SHIELD in Strange Tales, he would work on the design elements as much as telling a story.

In the recent tell-all book Marvel Comics: The Untold Story, Sean Howe describes not only the revolutionary design, artwork and graphics, but also how it was imitated. In a passage about Neal Adams, Howe adds  a footnote on page 88:

*In one issue of Strange Adventures, Adams tweaked his peer in a panel of outrageous wavylines that spelled out, when the comic was tilted, Hey! A Jim Steranko effect!

Is this well known?  Who knows what issue this occurred in?  And most importantly, does anyone have a scan of that page or panel to share here?

I remember it well. I don't have the original anymore but it was in Strange Adventures 216, on page 13. It was recently reprinted in the Deadman Book 2 TPB, page 88. I will scan it ASAP and post it here. 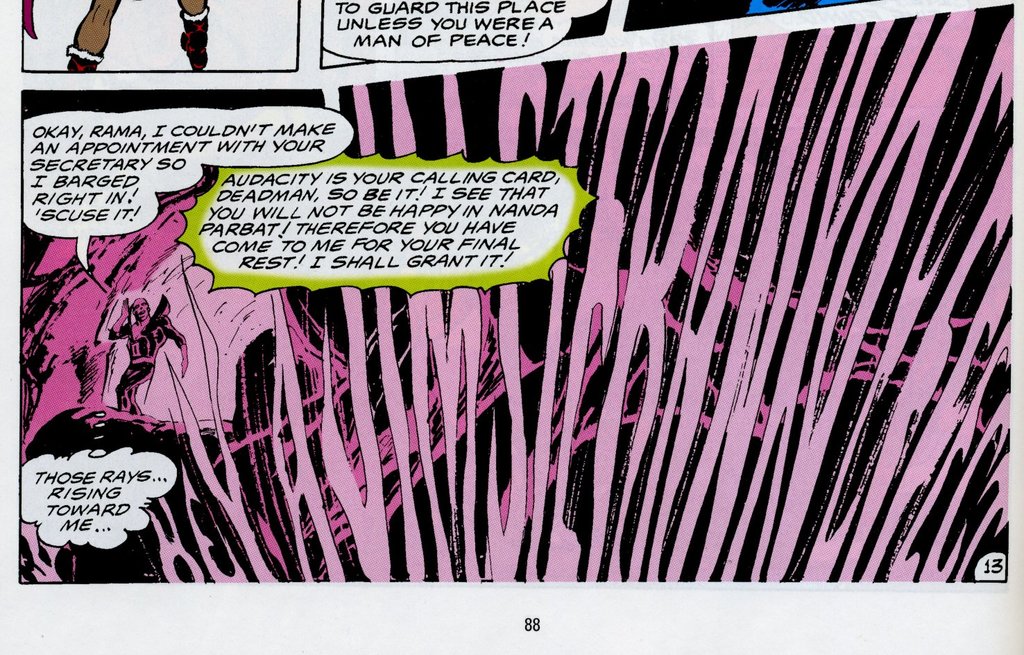 Thanks for posting the panel Richard. I read Howes book recently and I too was curious about the Adams Steranko tribute he referenced.

I wonder if the effect is more obvious in B&W?

Or for that matter, I wonder if the editor(s) at DC ever noticed it before it got in print?  Or if Adams got in trouble because of it?

I'm not familiar with the entire Deadman run. Is this the final issue?  And has DC reprinted in (all 12 issues?) in one volume like a Masterworks collection?   Please tell me that they didn't bust it up into two 6 issue hardbound collections to double the price??!!!

So far, it's in three TPBs. The third one is being released This week or next. The first one was released in May 2011, so I would think they are all still available. These three TPBs complete Deadman's initial run through various titles. This was the first issue following catching the One-Armed Man Hook, which should have ended his character, but didn't. He was only half-way through the run.

As for how easy it was to spot the Steranko Effect wording, I saw it without any prompting when I first bought the original comic.

Are the 3 tpbs a 'set'?  With similar trade dress etc?

Also, do they include the Kirby version from The Forever People?

I'm reading Deadman's apprearances alongside Swamp Thing in Keith Geffin's short-lived 70s Challengers of the Unknown comics at the moment.  Interesting little exercises in brand maintenance.  I wonder are they in the trades?

Deadman doesn't have any mission or quest, so he's just hanging around aimlessly, as is Swamp Thing.  The Challs don't even realise Deadman is there so far!

Boy, that could really be annoying to have Deadman hanging around, possessing different people, and not know it. Almost as bad as when the space phantom starts "replacing" Avengers and picking fights with one-another.

I've always wondered when this thing happens.... say "Deadman" possesses me... then an hour or two later, releases me after he's walked me around downtown to do whatever his goal is.... do I wake up with knowledge that I've been possessed?

Do I fall into a coma?  Do I just suffer short term memory loss?   Don't I wonder how I got down here on the corner of fifth and main without my  clothes on?   What about if I wrecked my car while under "Deadman's 'influence'.... Do I know who was driving it?  What about wondering if I drove to the tavern at 5th and Main streets?

If I were a henchman, would I wake up saying "Da, Boss...I don't remember anything for the last hour...Did I behave strangely?"  or would I say something like, "Quick, boss, call a psychic, cause I've been possessed by that do-gooder Deadman, and he's trying to wreck our gang!"

What about if Susy, the mob gunmoll comes onto me?  Does she say, "Gee, Roberto, you sure don't screw like you usually do..." or even, "Why didn't you nibble on my ear the way I like it?"

Anyway, in these appearances, the Challengers who are possessed by Deadman, lose all memory of what they did while he was possessing them.  They just come to as soon as Deadman leaves them and they say, "What are we doing here?"

But the keen and committed 'seekers into mystery' around them never stop and ask what is going on either.  They just ignore their team-mates protests that something is going badly wrong with their concsiousness and that they need help!

It's probably the in-joke in Deadman stories that most of his team-ups happen with the other superehroes none the wiser!

I want to say that in most stories I've read with Deadman, his "victims" have zero idea of their possession.

So, just how do they recover? What do they say, or think about what they've just done...

The two trades I have in my possession have the same color scheme for the binding and back covers. The front covers are different styles, using the cover art for STRANGE ADVENTURES 207 for Book 1 and different Adams art (not sure of source) for Book 2.

There was a hardcover collection (back in 2001) that is now very expensive if you can find it. Not sure how much of the above appears in it.

It occurs to me that Deadman's possessions are similar to those of Sam Becket in the show QUANTUM LEAP. These possessed people don't remember anything either.