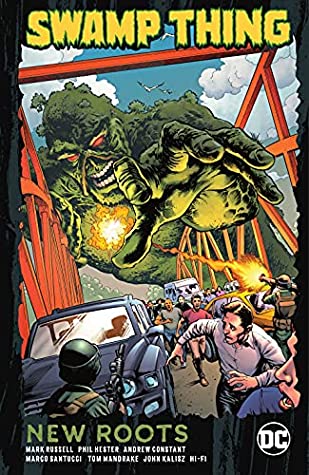 As the title implies, these stories represent a return to the Swamp Thing's roots: more of a reimagining than a reboot or a rehash. Russell, Santucci and Kalisz's tales open the collection, and come from the Swamp Thing Giant. Swampy is back to fighting the Sunderland Corporation. They have developed a bioengineered product called the Terminus Seed, which sterilizes itself so farmers will have to buy more. But since it sterilizes every plant it cross-pollinates with, it ultimately represents a death sentence for all plant life on Earth. Naturally ST actively opposes its use, so he sets about destroying every Sunderland facility.

He is presented much as he had been early in the character's life: a plant-man with a connection to the natural world (who remembers the trauma of his fiery death and rebirth in the swamp), but with no mention of continuity baggage like being an avatar, or the Green, or the Parliament of Trees. Over the course of this arc Sunderland's battle against ST escalates to include creating two Swamp Thing clones, as well as mobilizing the U.S. military. There is a new conclusion to the battle here, as Swampy manages to create a new green world while President Sunderland and his supporters hide in an underground bunker.

The second arc by Hester, Mandrake and Hi-Fi come from the Swamp Thing: New Roots series.  They are a series of brief standalone stories, although there is a recurring appearance by a "ghost light" called the Fifolet in Louisiana. They feature a cursed circus, a cursed slave ship, some cursed toys...lots of cursed stuff, now that I think about it. But there are also interdimensional monsters and a vengeful ghost. Fun to read, and with an even lighter sense of continuity.

Good and doubtlessly influential as the reinvention / retcon by Alan Moore was, it led to a lot indeed of continuity baggage.  Restoring Swamp Thing to its basics is probably a wise move, both for novelty and for wide appeal at this point.