For a long time, Big Finish had been prohibited by the BBC from doing any stories set during the Time War. I was pleased when that restriction was lifted, but disappointed when I found out I’d have to wait nearly two years before those stories would be released. Now my wait is very nearly over; the first set arrived in the mail today.

Initially, the Eighth Doctor Time War set was planned as a one-off complement to the War Doctor series. Sadly, the death of John Hurt means that there will be no more of those forthcoming. Soon it became clear that there was too much potential in the Time War to let the series come to a premature end. Soon there will be new series of The War Master (December) and Gallifrey: Time War (February). Also there are plans to up the Eighth Doctor box sets to three per year for the time being, one for the Time War and two for the Doom Coalition sequel.

According to Big Finish’s Vortex magazine: “There will be new regular characters in the Time War, too. When the saga opens, the Doctor is already travelling with Sheena (Olivia Vinall), who is a new companion for us but someone he has been with for a while. And then a second new friend will explosively enter his life—Bliss (Rakhee Thakrar), a refugee scientist. Listeners who follow our War Doctor stories will also need no introduction to Olistra (Jaqueline Pearce), here proving she has been a thorn in the Doctor’s side for far more years than we might have imagined.”

We have already heard some Eighth Doctor stories set during the Time War (in the Diary of River Song series and elsewhere), and we’ve seen him regenerate in the mini-episode “The Night of the Doctor”. As showrunner Steven Moffat once said of the audio range, “We saw how the Paul McGann Doctor died—now it’s time to find out how he lived.”

THE EIGHTH DOCTOR: THE TIME WAR
The Starship Theseus - p1
Echoes of War - p1
The Conscript - p1
One Life - p1

Now I'm going to have to decide to shelve Susan's War with  "Time War" *(War Doctor, War Master, etc.) or with "The Women of Who" (Charlottte, Lucie, Rose, River, Jenny, etc.). Decisions, decisions... 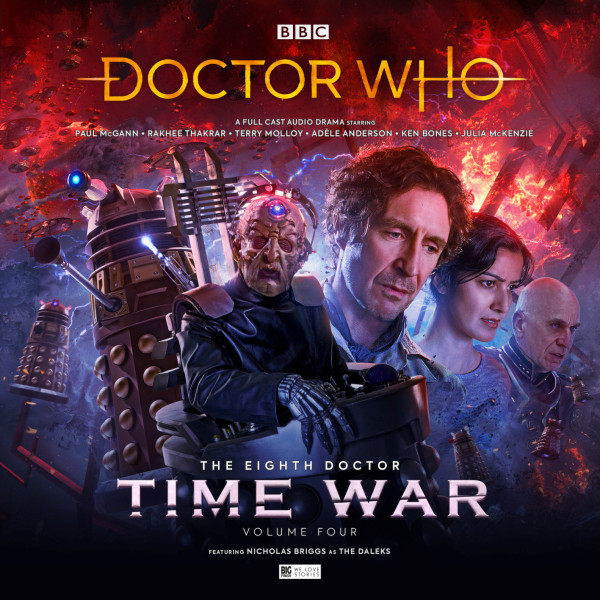 "The Time War rages through space and time--two powerful enemies in a fight to the death. the doctor keeps to the fronges of the conflict, helping where he can. He is not a warrior. Not yet. But this war takes no prisoners, and friends and enemies will draw the Doctor ever closer to his destiny."

"Gentle scientist Davros lives one day after another on the peaceful world of Skaro, with his loving wife Charn. But when those days begin to run backwards, and two mysterious strangers enter his life, Davros is drawn into a terrible future. Or is it a terrible past?"

This story takes place in an alternate reality in which Davos is a kindly Kaled married to a Thal. He and his wife have invented a machine capable of tapping into other realities. When the story opens, it has been four days since they first activated the machine. The next day, it has been three days and he realizes he's living his in reverse. Remember King Arthur's Merlin, who "youthened" and "remembered" the future? This is how that would look.

His wife is killed, but when he wakes up the next day she's still alive, and it's been two days since the machine was activated. the Doctor and Bliss are there, too, trying to set things right. Then the Dalek Time strategist arrives and fills Davros' head with awful lies about the Doctor. the doctor and Bliss are both killed, but in order to save his wife's life, the time Strategist convinces Davros that he must kill himself.

So far, the story has been fairly straightforward believe it or not.

The title of the story is a hint as to what happens in part two.

"The Doctor and Bliss fight the Dalek Time strategist's plan to rebirth the Daleks into the universe--into every universe. Davros must stand against his destiny to try and save all he holds dear. His creations are returning."

Davros allows the Time Strategist to talk him into proceeding with his plan. Davros has already see the Daleks kill his wife, but the DTS convinces him that the Daleks can be remade to be Good. His real plan, however, is to eliminate all alternate realities and combine them into a single universe which would host an Ultimate race of Daleks. Now Davros must relive the four days of part one, in correct order.

Because infinite versions of reality are constantly overwriting each other, Davos begins to change from fully human to hybrid human/Dalek form. But, for the same reason, the Doctor and Bliss return as well, from a reality (or multiple realities) in which they were not killed. In effect, during this flux period, no one in the merged reality can die.

Kudos to Terry Molloy (and the production staff as well, I suppose) for pulling off all stages of the transformation on audio.

"The doctor and Bliss find the Time Lords recovering from a war they have no memory of fighting. As the General decommissions a host of terrible weapons, the Twelve sees an opportunity. In a universe where no-one remembers the Daleks, Time Lords are the monsters that everyone fears."

The Doctor and Bliss arrive on Gallifrey semi-amnesiac. Bliss knows her name, but that's about it. The Doctor knows who he is, but he remembers the Twelve (a woman in this incarnation) as the Eleven. The Time War is apparently over, and the entire galaxy has been subject to some sort of "time event" which has wiped everyone's memories... everyone except the Twelve, who was in cryo-stasis. The whole situation is a ploy of the Time Strategist, however, in order to resurrect the Dalek race.

RESTORATION OF THE DALEKS:

"The Daleks are coming. As the dalek Time Strategist restores its forces from the multiverse, Davros has a new purpose, and it is far worse than either Daleks or Time Lords imagine. While Bliss does all she can to save a world, the doctor is set for a climactic confrontation."

I forgot to post a reaction to this one last week while it was still fresh in my mind. Whoops. There is a Big Finish range, I, Davros, which presents his origin story. It is not one I've ever been particularly interested in, nor do I plan to buy it now, but I gather this set is loosely based on it, at least in the respect that it presents an alternate version of events depicted in that series, I didn't have trouble following this set, but I think someone familiar with I, Davros would have gotten more out of it.

Just as the Time War grew out of the Gallifrey series, so too did it grow from I, Davros. 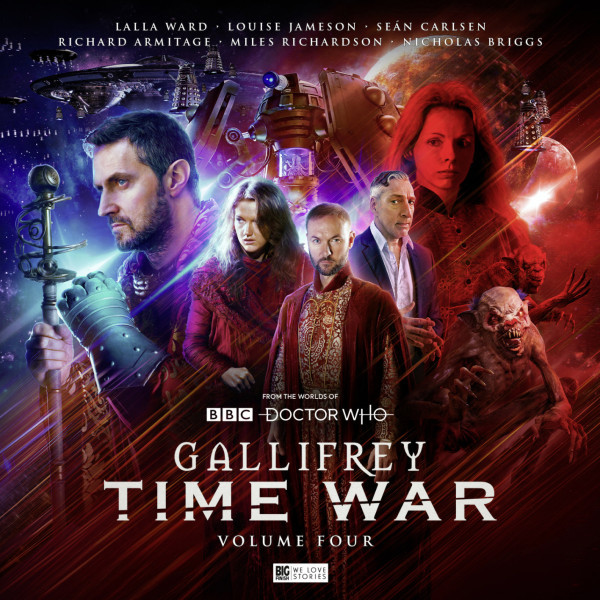 Romana is lost to the Time War though Leela and Narvin still fight to survive.

A resistance, caught between Rassilon’s fury and the Dalek Emperor’s mania, have a desperate plan to stop the conflict.

Everything ends. And for some on Gallifrey, the Time War will soon be over.

"As the resistance scatters, Leela and an unknown ally embark on a rescue. But there are traps for the unwary inside the Vortex. Meanwhile on Gallifrey, Livia and Mantus are at odds, seeking to protect themselves as Rassilon's grip tightens."

After 13 months, I have clearly lost the narrative thread, especially since this episode begins in medias res directly from the end of the previous chapter (see "Unity," p.5).