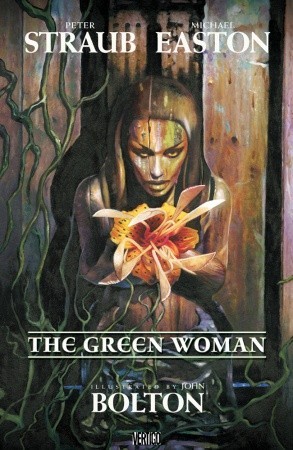 Renowned horror novelist Peter Straub revisits the world of his "Blue Rose Trilogy" and the character serial killer Fielding “Fee” Bandolier (last seen in his novel The Throat) in his graphic novel debut. I don't know if Straub was assuming readers would know those stories, but having not read them I found this story confusing, especially at first. After awhile it carried me along as things became clearer from context.

Fee is haunted by the memories of his many victims, as well as his bloody military service. Bob Steele is a New York detective (named after a Hollywood cowboy hero) who is on a crusade to catch Fielding Bandolier. The scene keeps shifting between them--along with a younger serial killer who wants Bandolier to mentor him. Steele leaves police work, but continues to obsess.

The story takes a supernatural turn when Steele tracks the young killer back to Ireland, to a pub called the Black Galleon, which is named after a ghost ship. There he attempts to take the suspect back to New York, and is confronted by the murderous spirit of the place. He burns it down, setting up the final confrontation.

The titular Green Woman is the name of an abandoned Midwestern pub: but it is also the location of the Black Galleon's figurehead, and the final home of the curse since that pub was burned down. The scene is set for the meeting of Steele and Bandolier, which does not come out as expected. But the book ends with the young Irish serial killer at the Green Woman, ready to continue the lineage.

Artist John Bolton's painted pages are a wonder, as always. He consistently delivers tense, spooky atmosphere, regardless of the twists taken by the script. It is largely due to his contribution that the book reads like a short, arty horror film.

Permalink Reply by Rob Staeger (Grodd Mod) on June 20, 2020 at 2:31pm
I'm pretty sure I picked this up, though I don't remember for sure. Given how arresting I found Straub's Blue Rose series (not knowing it was a series, I started with The Throat, and it was incredible!), It's strange that this didn't make any impression on me. Then again, maybe I only *intended* to pick it up, and never got around to it.

But in any event, if you like horror and suspense, I recommend the novels.