THE BATMAN FAMILY: In anticipation of the upcoming release of the Silver Age Batman Omnibus, I gathered together from various sources (Batman in the Fifties, Batman: the Annuals v2, Batman from the '30s through the '70s, DC's Greatest Imaginary Stories v2) all of the stories featuring Ace the Bat-Hound, Bat-Woman, Bat-Girl and Bruce Wayne, Jr. I have in my collection. (But not Bat-Mite! I hate Bat-Mite!)

Some will point out that the the stories of Batman II (Dick Grayson) and Ronin II (Bruce Wayne, Jr.) are "imaginary," but who's to say? I prefer to think of all the stories I mentioned as taking place in the same reality, and there is some precedence for that. Within DC continuity, Gardner Fox is said to have dreamed the Earth-2 stories which were published on Earth-1. I don't think it's beyond the realm of possibility imagination that Alfred wasn't actually channeling future reality somehow in his "fictional" stories.

Inspired by Gwandanaland and tomorrow's celebrations, I've decided to take a break from my generalized 2022 reading project of GA superheroes, and spend this July specifically reading some GA Red White and Blue heroes that I've either never heard about (The American Eagle and Eaglet, The Spirit of '76) or have heard of but never read (The Shield) or never read GA adventures of (Uncle Sam). 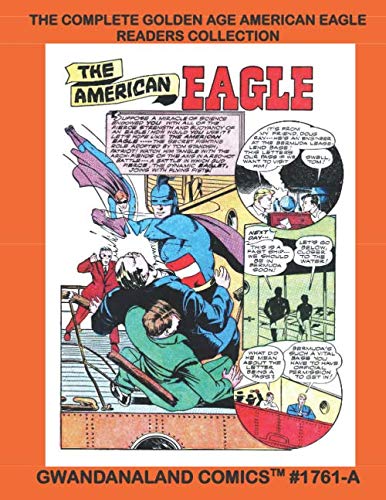 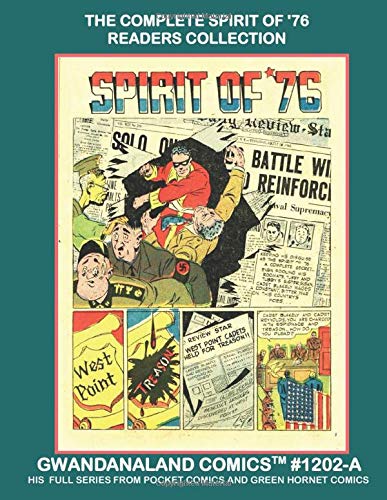 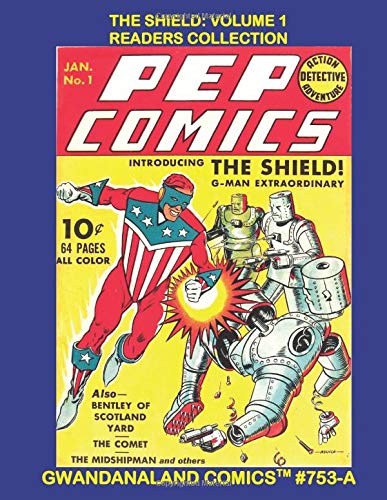 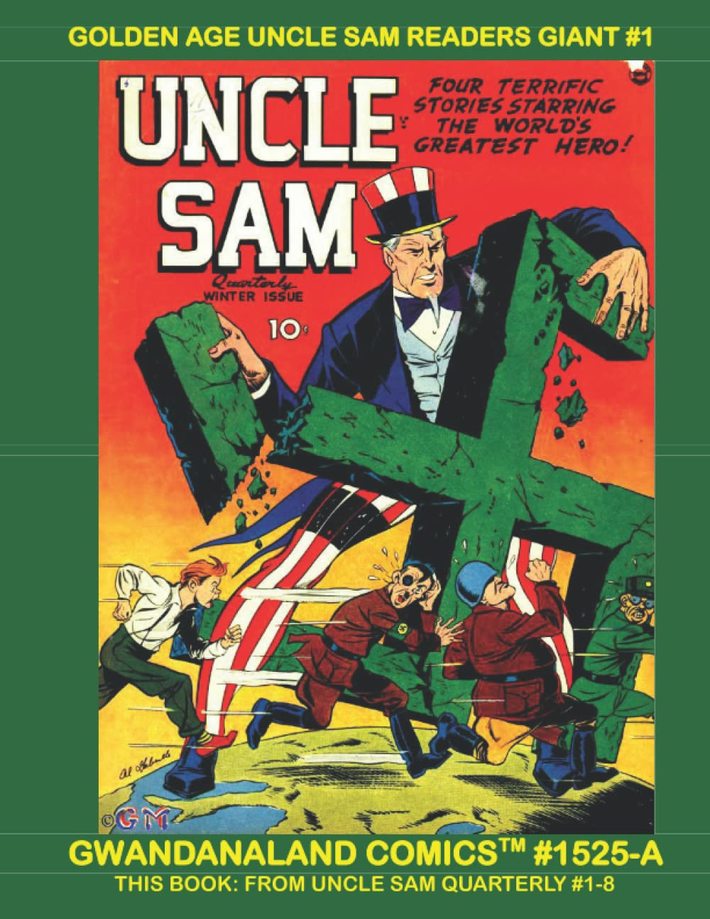 Inspired by Darin's post directly above, I have chosen Craig Yoe's Super Patriotic Heroes as my reading project for the day. I read only about half of it when it was new, and look! There's my bookmark from 2018!

In addition to the covers of better-known patriotic heroes, it includes full stories of...

The American Crusader (Defender of Democracy)

Rusty Ryan (and the Boy Brigadiers)

The Eagle (and Buddy the Daredevil Boy)

USA (The Spirit of Old Glory)

ETERNAL WARRIOR: An omnibus edition of the original Valiant series from the '90s has been solicited for September release, so I thought I'd reexamine it with an eye toward deciding whether or not it was worth owning in omnibus format. I concluded that it was not. However I did end up rereading issues #6-8, the best of the series (IMO). Incidentally, a tpb collection of the BWS issues of Archer & Armstrong has been solicited for August.

VALIANT / UNITY: I got a bit carried away yesterday after reading Eternal Warrior #6-8 and set about trying to make sense of the thirty-year-old, 18-chapter "Unity" saga. "Unity" was a crossover involving two months of Valiant's other eight (at the time) titles, plus two bookends. It's not chronological it one were to follow the chapters as designated on the covers, but is there an order which makes more sense? The answer is, yes, there is (i.e., I've found an order that satisfies me), but it helps that my interest lies primarily with Magnus, Solar and Archer & Armstrong. Some of the issues cover the 158 days of the event fairly closely; others skip weeks at a time; many of them present the same events from different points of view. What I would really like to see is a comprehensive omnibus which present the entire story in chronological order. It would be difficult to edit, but it would be my dream job to give it a shot.

"GOLDEN AGE" FIND!: When I went to my LCS today, the owner pulled out a box of his most recent acquisitions to show me: a box of Golden Age comics! I can never afford to buy any, but I do enjoy rifling through them. These looked good... too good, as a matter of fact. Then he admitted they were replicas. (That's the reason for the quotation marks around "Golden Age.") Then he pulled out two more boxes! It was quite an eclectic mix. For example, he had the entire run of Fighting American, the entire run of (the original) Phantom Stranger, and issues #2-14 of (the original) Ghost Rider. He also had a ton of The Spirit. He was asking only $10 a pop, and I still had $192 in store credit left from my last cull, so I decided to choose 19 of them. I tried to avoid duplication with things I already have in Marvel Masterworks or DC Archives or other collections. Just a minute... let me ask Tracy to post a picture. I have the full contents of All-Winners Comics #1 and Leading Comics #1 elsewhere (oh, Daring Comics #1, too), but they were too cool not to have together. Many of the others I have the lead feature only, but these replicas include the entire contents in full color!

I am particularly pleased with my grouping of femmes fatale. Marvel is never going to get around to reprinting thier bevy of beauties, and now I have the first three issues of both Sun Girl and Namora. (There are also several other issues of the Blonde Phantom I could purchase at a later date.) I already have many issues of Black Cat (thanks to PS Artbooks), but only after it converted from superhero to horror. Miss Fury goes along with two hardcover collections of the Sunday comics, and there are more issues of those available, too.

They may only be replicas but that is quite a score. I am jealous!

It strikes me how common a color yellow was on the covers of comics of the Golden Age. A bit of research* tells me that Blonde Phantom spun out of All-Select: #10 was a super-hero anthology; #11 was All-Select Featuring Blonde Phantom; #12 (the one I have) was Blonde Phantom. the character also appeared in Marvel Mystery Comics, but I didn't delve deeply enough to determine whether that was before or after her first "solo" appearance in All-Select #11. I knew the covers of #11 and #12 were similar, but I was working from memory when I bought them in hope of having the first one. I was also able to confirm (again, working from memory initially) that three issues each was the entire run of Sun girl and Namora, so I've very happy I chose to buy those.

*In a COVID world, I now hesitate to use the term "research" to describe looking something up online or elsewhere, but I can't think of another word I like as much. (The other day I used "study.")

THIMBLE THEATRE: Inspired by All in Color for a Dime, I decided to read the pre-Popeye Sundays. (I figured that was less of a time commitment than the entire rune of E.C. Segar dailies.) Segar started the dailies in 1919; the Sundays followed in 1924; Popeye was introduced (in the dailies) in 1928; Popeye was folded into the Sundays in 1930. Prior to the introduction of Popeye, the star of Thimble Theatre had been Castor Oyl, Olive Oyl's brother. At one point in the Sudays (March 24, 1928), Castor informer his wife that he was taking a trip out west, and he stayed there for two years! In 2018, Sunday Press published a single, full-size volume of Thimble Theatre Sundays from January 25, 1925 (the very first one) through March 2, 1930 (the first appearance of Popeye in the Sundays). From that point, the continuity continues in Fantagraphics' six-volume set of The Complete E.C. Segar Popeye.

Randy Jackson replied to Captain Comics's discussion Bond #4: 'Diamonds Are Forever'
"I do agree with you Commander that the Moore films tended to be sillier and relied more on stunts…"
7 hours ago

Lee Houston, Junior replied to Steve W's discussion A Cover a Day
"I guess medical comics can cover many genres. (Image courtesy of the Grand Comics Database.)"
10 hours ago

Irma Kruhl replied to Steve W's discussion A Cover a Day
"I loved the Mary Robins RN serial, with all that great John Romita Sr. art. The Mary Robin stories…"
11 hours ago

Jeff of Earth-J replied to Steve W's discussion A Cover a Day
"Before someone beats me to it..."
11 hours ago