Permalink Reply by Dandy Forsdyke on November 6, 2011 at 9:44am
A DC revival of the Marvel Family in the 60's would have worked brilliantly and far better than their revival of Plastic Man in my opinion. Although Mort Weisinger, who was a very powerful and dominant figure, would have not allowed it probably as it would have competed with Superman.

Permalink Reply by Emerkeith Davyjack on November 6, 2011 at 2:49pm

For 3 GA DC characters I know almost nothing about , none of whom were , strictly speaking , " super-heroes " in the fan definition...(?):

The Ghost Patrol . They ran through the very end ( -ish ) of the " true " Golden Age at DC , FLASH COMICS #104...But , they NEVER re-appeared at DC in new material until the 21st Century ! ( Note: I like the " Atomic Age " concept and figure that the discontinuation of Marvel/'s " Big 3 " heroes and DC's ending of all solo titles not by their " Holy Trinity " ( Of course , characters with support slots in the Trinity's anthology titles continued onward . ) in 1949 makes that a reasonable , from a super-herocentric viewpoint anyway , date for the GA's end . )

Permalink Reply by Emerkeith Davyjack on November 6, 2011 at 2:50pm

He's not one of my favourites, but the Black Terror from Standard had a strong costume. The costume of Mr. Bones, from Infinity, Inc., was based on his.

In the Golden Age there was a sub-type of patriotic hero with American Revolution era-style costumes. Examples are DC's Mr. America, Harvey's Spirit of '76, and Standard's Fighting Yank. I can imagine something interesting being done with one or another of this trio. Miss Liberty, from Tomahawk, was a similar Silver Age character, but actually placed in the Revolutionary War period.

Quality characters that might've been worth reviving include Uncle Sam and the Human Bomb. As a kid I liked the Light's design, but it doesn't do too much for me now. Doll Man did get his revival; the Atom was based on him.

I like Gleason's Crimebuster, and particular the later version of the character, when he just wore a sweater. There might've been a market for such a character in the early Silver Age.

I don't know reviving one of the kid gangs of the Golden Age would've been worth trying, but the kid gang idea might've been.

Gleason's Claw was a great villain, but perhaps the Comics Code would've inhibited him too much. And I can't say I wish he had been revived with his Yellow Peril dimension intact. 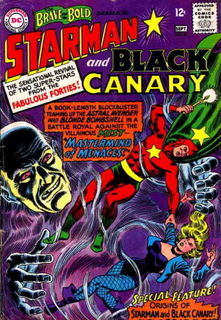 DC clearly needed Black Canary, as when WW went down, they had nothing except some -girl versions of the existing heroes.

I agree that Starman would've made a good revival in some form, especially in a hopped-up SF version that was popular just then. OTOH, maybe they thought of that and tried it, and it didn't work out. Although they didn't try to update it very hard.

I never understood DC's concept of slapping together some reprints to put out a tryout issue for a new concept, and this was similar to that. Pairing the old-line heroes didn't prove much of anything. NO GA hero had his own book (except the trinity, of course) so what was this trying to prove?

I'm not so sure a Wildcat revival would have worked, as I'm not sure what niche he could fill. He seems to work best as a grizzled old veteran grumping at the young guys, and the Earth-2 version fills that role really well.

Hourman has never struck me as a strong concept, although a pill-popping super-hero might have had some popularity or positions to consider, assuming the CCA would've even let him appear.

Dr. Midnite is probably too close to Batman to have stood out in a 60s version, but I agree that a Marvel Family comic would've had a good chance. It might even have been a book that could've withstood the "camp" phenomena. At worst, it would've had a better chance than the mish-mash they tried to create later on. And on. And on.

It might've been interesting to see the Blackhawks reintroduced as an SF concept with space ships, in the way Flash and GL were updated, rather than as that train wreck that we got as they went from "adventurers" to "spies" or whatever it was. It was so scary, I read that book with my eyes shut, so I don't know what was happening.

As always with these things, execution is everything. I don't know that The Vision was on everyone's lips as the next hero that needed to be revived, but he turned into a really interesting (if B-level) character.Bulletman (and Bulletgirl!) might've been an interesting concept to update.

My favorite would've been to see Supersnipe, the kid with the most comics in America, but that's just the paper fumes talking.

I would've paid money to see Mr. Scarlet updated, only to see how they'd handle Pinky. Any kid who can trail around behind a guy dressed in red spandex and call himself "Pinky" is a bad motherf*@!er for sure.

>NO GA hero had his own book (except the trinity, of course)/p>

Well we should allow you that one since you are Mr. Silver Age, not Mr. Golden Age, but you are forgetting Green Lantern Comics and All-Flash!  Tsk. 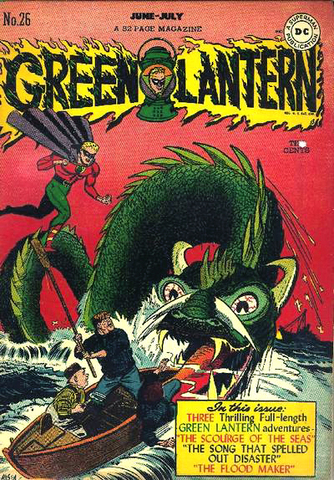 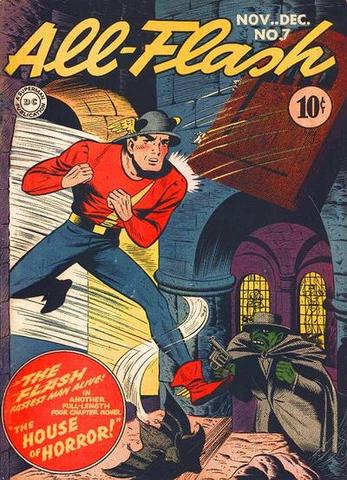 Sorry, I meant no GA hero had his own book in the SA (I'm not counting the Spectre). So giving Starman and BC a tryout as their same old selves in their same old costumes with their same own powers and having a good seller would have been a real breakthrough.

Whereas, if they had updated Starman and BC to SF versions for the '60s and put them in B&B, their team-up might've had a chance of attracting attention. I'm not sure what the purpose of those two issues was, or if they thought their look had already been established well enough in JLA issues to get a following.

Given all they were trying, and how odd some of those tryout issues were, it's surprising they didn't try a JSA comic. Maybe they thought it would have diluted the summer Crisis too much, but I'm not seeing that as a compelling reason not to create a new comic that would sell. There were certainly enough little-known heroes to work with, plus some bigger names even if they didn't want to duplicate their big-sellers.

﻿﻿I think Wildcat and Dr Midnight being close(r) to the Batman concept would have been an advantage. As would Captain Marvel close(r) to the Superman idea. I remember as a very young child (and a huge Batman fan) seeing Daredevil catch my eye (the only Marvel that ever did until I was a little older) and thinking "Wot's this? A red Batman!?" So that would have created an interest possibly.

I like the idea of Starman having a more SF slant. Possibly a cross between Adam Strange and GL. And 'Blackhawks-but-with-spaceships' is a great idea. Or perhaps an idea along the line of Gerry Anderson's Thunderbirds idea of an international emergency service!

Yes,  I think Hourman would have have a different device to gain powers for an hour than popping a pill.Perhaps some kind of internal self-timing device.

If Doctor Fate couldn't get his own series in the Silver Age, I can't see any other JSAer getting one either.

It just occurred to me that maybe Black Canary got enough positive responses from her B&B team-ups with Starman that it was a major factor to her joining the Justice League.

As for Starman, the late 60s JLA/JSA stories usually had him being pummelled rather easily!

As regards why DC didn't do a JSA comic, it did do some all-JSA issues of Justice League of America (the third JLA/JSA adventure, and the first part of the Red Tornado intro.) Also, Hourman did get a new story in the back of Spectre #7. (Later the Golden Age Flash got one in the back of Flash #201.)

The Starman/Hourman team-ups were preceded by the Doctor Fate/Hourman ones in Showcase, by the same creators. My guess is the creators were thinking in terms of using these characters they had already (re)introduced, and that the stories were seen as team-ups rather than try-outs.

In the earlier part of Showcase's history the title was edited on a turn-taking system. The same was apparently true of The Brave and the Bold during its period as a try-out title. Perhaps after the title was converted into a team-up title Schwartz had the responsibility of preparing two two-issue blocks for the title (perhaps as a hangover from that system or because George Kashdan didn't have time to do them all), and thought the JSA team-ups would be interesting to do. For whatever reason the Doctor Fate/Hourman team-ups were shifted into Showcase, and the "Super-Team Supreme" element added to the covers and stories (I think it looks like an afterthought).

The issues being assigned as two-issue blocks would explain why Schwartz did two issues with each team, instead of four stories with four different line-ups.

I think Captain Battle had potential. He was a genius inventor former WWI ace with a rocket pack and an eye-patch who fought the Axis, starting before America's entry into the war. The character apparently wasn't very successful even in the Golden Age, and the instalments of his feature that I've read were on the crude side in their stories and art, but I like him. For part of his career he adopted a cape, but I prefer his look without it. Gleason also tried Captain Battle Junior for a couple of issues.

Starman sounds like very generic superhero name (a lot more than Green Lantern for example) and wouldn't have needed much of a pitch to the readers, or even much of a revamp. In fact the more I think about it 'Starman' perhaps should have been the name they gave to Adam Strange.