What's in a Name?

Hey guys.  Long time no see.  You've moved on me since I've stopped by.  Opening the store in Sept 2006 has put a crimp in my "getting lost on the message boards for hours at a time" time.  I need some advice and I know this is the place to get an answer.

A bit of history.  After being a longtime comics fan and reader, I decided to throw my law license to the wind and open up my own comic book store. I talked with the owner of a local chain of stores about being a reference for me with Diamond to open my account.  He countered with me opening up under his name and umbrella, getting a bigger discount on merchandise and access to the inventory of his other stores.  In exchange for a small fee.  The store has been a huge success, but more despite him than because of him.  He is much more interested in buying and dealing in back issues than new stuff and I realized that he owns stores, but he doesn't run them.  His actual knowledge of running a store is 10 years old and really doesn't relate any more.  So, I decided that it is time for me to move on.  Every year, looking at the nominees for the Eisner Spirit of Retailing Award made me jealous.  I didn't want to try for it knowing he would get the accolades.

I sent him a note about this, offered a fair separation agreement and figured he would balk and things wouldn't really change.  Luckily for me, he agreed with me and we are going our separate ways.  But this leads me to a problem: I need a new name for the store.

Now I did set up an LLC when all of this began, back in 2005.  I thought long and hard on it.  I was going to go into this with my brother-in-law.  So I was banging around all sorts of names.  I decided to break it completely down to its core.  I started with 2 Fat Guys Comics.  I decided I needed something more dynamic.  Ding ding ding - Dynamic Duo Comics!  Well, that was all great.  I sent off the paperwork, got the fancy binder and everything.  Then his wife said no effing way.  So, while I do already have that name, as a one man operation, its a little silly now.

So I am coming to you as a group for advice.  Some factors going into the name for me.

1.  I want to do a lot more regional advertising.  I am located just south of Pittsburgh.  I don't want to advertise in Pittsburgh, too much competition and expense.  I want to head south into the Wheeling WV area, where there are no other stores.  I want them to know I am here.  Its about 30 miles away, but an unserved market.  My initial thought is radio, so I want a name that will sound good in this way.  It is main reason I don't go with the easy choice of "Colin's Comics".  My fear is that it would sound hole-in-the-wall-ish.  I am going for bigger branding.

2.  I really like the idea of adopting the old school font from Action of Detective Comics into the logo.  I have been thinking about "All-American Comics" for this reason.  But is it too generic?

3.  I want the website to be available without having to get really creative. I want to do a lot of online promotion for the store. My wife really likes The Comic Shop, since that is what a lot of people already call it ("going to the shop').  But of course someone is squatting on that website name.  I thought of The Comic Shop PA, but www.comicshoppa.com looks silly.  A customer came up with "The Comix Shop", but my wife hates intentionally misspelled stuff.

5.  I want it to be sort of unique.  What I mean is that I want to be able to go to an industry function  and have people recognize the name.  Another reason why Colin's Comics feels a little lame and rinky-dink. Same with The Comic Shop.  But on the other hand, The Comic Shop of Pittsburgh sounds a little fancier.  Like a Lexus dealership.   I'd love for people to have heard of me and recognize the name.

6.  But I don't want it to be obscure.  While I'd love for the name to incorporate a comics term or location (Earth-2 Comics is awesome, but Sanctum Sanctorum Comics seems a little too insular to the comic community), I don't want it to be confusing.  And there have been a ton of Batcaves and Arkham Comics, so I don't want to be duplicative.  I figured that this would be the place to find something neat like this.

So any thoughts or ideas would be greatly appreciated.

Permalink Reply by Commander Benson on August 5, 2010 at 12:36pm
This probably won't do you a bit of good, but what leapt to my mind as I read your post was the slogan that used to appear on the sign above the spinner racks of yore: "Hey, Kids! Comics!"

Permalink Reply by Rich Lane on August 5, 2010 at 12:49pm
Earth C(omics)
The Hall of Comics
Hypertime Comics
Worlds Within Worlds
The Longbox Lagoon

Permalink Reply by David Warren on August 5, 2010 at 1:16pm
It doesn't have comics in the name but how about

Permalink Reply by ClarkKent_DC on August 5, 2010 at 1:17pm
Wow, Colin, you've put a lot of thought into this. I'm impressed! Not that I have an answer for you, but I'm impressed!

I think this point is key:

4. I definitely want the word Comics in the title. There is a store out here called Impossible Dreams and most people don't know that it sells comics. They don't know what it sells That's all the sign says. There was also a gaming store out here called Helm's Deep. Great if you are a Tolkein fan. Not great for Grandma looking for a gift for Timmy.

Every now and then, when I travel through Pennsylvania, I stop in at a King's Family Restaurant. There's nothing terribly special about them -- just roadside diner-type fare -- but each table has a brochure about the place and its history, and it notes that the name of the first restaurant in the chain was "King's Country Shoppe," until one day a customer asked the founder Why doesn't it say 'restaurant'? It's a restaurant, isn't it?

Anyway ... since you want to have the word "comics" in the title, and you want to incorporate the old school font from Action Comics or Detective Comics into the logo ... how about "Comics Adventure"?

Permalink Reply by Commander Benson on August 5, 2010 at 1:32pm
This one might be a little better.

Back in the Golden Age, DC put out a title called Comic Cavalcade.

Why not go with "Comics Cavalcade"? 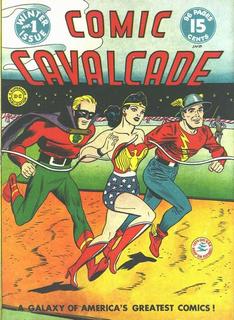 Congrats on splitting off! Are you still doing Magic? How about other game stuff?

I ask because I've had great success with a name that doesn't "scream" comics or games, but is at least vaguely related to both, by having a slogan/ subtitle that identifies what I sell. It appears everywhere the name appears, so that it clearly identifies what we sell, and who we sell it to.

If you're doing comics and just Magic, how about:

Fantastic Lands
Comics and Magic (or "and card games")

If you're doing comics and a broader range of games:

Getting Magic back up and running. Trying to grow the gaming again.

Here is the current sign, which has been the best advertising I have done. I now have the sign beside it as well. So I can use both. The problem is that I have no walk by traffic, so I have to catch them at the road. That's why I like the big COMICS.

Wow, I need to take a new picture.

Permalink Reply by Don Collett on August 5, 2010 at 4:34pm
I like David Warren's suggestion. "Secret Identity" is a phrase even your average Joe/Jane will recognize. "Secret Identity Comics and Games".

Permalink Reply by David Warren on August 6, 2010 at 10:43am
I like Fantastic Journeys better than Secret Identity.
It is less super hero centric and will encompass gaming as well.

Permalink Reply by Colin McMahon on August 6, 2010 at 1:12pm
Thanks guys. I think I have my answer. It certainly fits all of my criteria. I just have to secure the url and the name with the state. Then I'll let you know.

Thanks guys. I think I have my answer. It certainly fits all of my criteria. I just have to secure the url and the name with the state. Then I'll let you know.

Permalink Reply by Colin McMahon on August 6, 2010 at 4:25pm
There is a store on Pittsburgh's South Side called Copacetic Comics. It reminds me of when I went to Best Buy looking for the Racontuers album. The guy had to look it up in the computer. Neither of us new how to spell it.

I am staying very simple. Clean and simple.

Dang, I was just about to add "Quixotic Comics" to the list.
Colin McMahon said:

Thanks guys. I think I have my answer. It certainly fits all of my criteria. I just have to secure the url and the name with the state. Then I'll let you know.