X-Men's "Hellfire Gala" had one last surprise, and it was deadly for a major character July 8, 2021 — The Hellfire Gala had one last party favor up its sleeve last week: the death of a popular character.

Well, popular on TV. Wanda Maximoff — the Scarlet Witch — was boffo on her Disney+ TV series, WandaVision, where she was portrayed by Elizabeth Olsen. And she’s apparently going to more or less co-star in the upcoming Doctor Strange in the Multiverse of Madness (2022), with Benedict Cumberbatch.

But in the comics, she isn’t exactly Miss Popularity on the sentient island Krakoa, where all of Earth’s mutants now live. That’s because for many years — well, from her introduction in 1964 to 2016 — Wanda thought she was a mutant. Not only that, but from 1983 to 2015, she thought she was Magneto’s daughter … and so did he!

But that was temporary. It turns out that when the Fantastic Four and X-Men were the cinematic property of Twentieth Century Fox, those characters found themselves being minimized in the comics. And characters like Wanda and her brother Pietro were de-mutantized so they could be used by Marvel Studios.

Scarlet Witch #11 (2016) established that the two were never Magneto’s children, but instead gained super-powers from genetic tinkering by Marvel baddie the High Evolutionary. Which is why all the mutants on Krakoa call her “The Pretender.” When Magneto was revealed to be the father of Wanda and Pietro in 1983, we all slapped our heads and said, “of course!” Then in 2016 they blamed it all on the High Evolutionary (top left). (Cover art to Scarlet Witch #11 by David Aja, copyright Marvel Comics)

But worse, Wanda had a mental breakdown in 2005, and used her powers to remove the powers of 90% of Earth’s mutants. Those that happened to be, say, in flight or underwater or something … well, they died. The survivors, suddenly powerless, were none too happy.

Currently, mutants have actually defeated death. I don’t mean that metaphorically, even though the X-Men for years were notorious for dying and somehow returning. (Especially Jean “Phoenix” Grey, whose name kinda said it all.) Today on Krakoa, five mutants — called, rather unimaginatively, “The Five” — have combined their powers to grow exact, living duplicates of other mutants. Professor Xavier’s Cerebro, meanwhile, is continually updating and archiving the consciousness and memories of every mutant on Earth. The result is that if a mutant dies, The Five provide a new body, and Cerebro downloads the old mind, and voila! Dead character is back! Nanny boo-boo, Grim Reaper!

So all those mutants that Wanda killed are back (or most of ‘em, anyway) and boy, do they hate her. Even if what she did wasn’t permanent. And give her a break, guys: She did try to revive a few million dead mutants on the island of Genosha, but only succeeded in creating millions of mutant zombies. (Don’t think about it.)

So back to the Hellfire Gala. This was one heck of a party, one that ran through 13 X-books in June. Based on the Met Gala, it was a swell affair (and an affair for swells). Ambassadors! Avengers! CEOs!

Yes, the usual riff-raff tried gatecrashing, and engaged in drunken brawls. (Looking at you, Deadpool.) But this was meant to be a coming-out party of sorts for Krakoa, and the Hellfire Company, which sells life-extending drugs to the world that can only be grown on Krakoa.

So everybody was decked out in couture that everyone calls haute, but to me looks ridiculous. And the Krakoans announced a new set of X-Men, an old-fashioned superhero team that had been absent the last few years. And then the climax: Krakoa terraformed Mars — and moved in.

We’ve still not had a look at how the world will respond to Marvel’s mutants colonizing another planet in our solar system. We can assume it will not be with the milk of human kindness.

But that’s for later. Meanwhile, at the end of S.W.O.R.D. #6, we see — surprise, surprise — Wanda Maximoff arriving after the party is over, at the invitation of Magneto. She arrived deliberately late, she said to him with downcast eyes, because “The Pretender can’t sit at the feast.”

But the Master of Magnetism isn’t having any of that. “You are my daughter, Wanda,” he says, pulling her in for a paternal hug. “You will always be my daughter. And I will do what I must to make things right.” Magneto still considers Wanda Maximoff his daughter … and is planning something “to make things right.” Never trust Magneto when he gets a bug in his helmet. (Art from S.W.O.R.D. #6 by Valerio Schiti, copyright Marvel Comics)

Which sounds awesome, right? Like maybe I’m tearing up a little.

But then how come Wanda’s dead body is found the following week in X-Factor #10? We don’t know the hows and whys, but she is not only dead, she is most sincerely dead. The last we saw of her alive she was with Magneto, and um … oh, dear. Maybe “I will do what I must” isn’t entirely a good thing when it’s uttered by a guy who’s spent most of his adult life as a supervillain.

Of course, we don’t know that Magneto did it. Although Wolverine’s reaction demonstrates that he thinks so. Add to that, next month will see the first issue of a five-issue miniseries titled The Trial of Magneto.

So we’re definitely supposed to think Magneto did it.

And I think he did. And why would he kill a woman he regards as his daughter? Well, because of what he said: “I will do what I must to make things right.”

Think for a minute what that means if A) you think mutants are awesome and humans are scum and B) you have zero scruples. I know it’s hard, but think about how you feel when you’re cut off in traffic, and expand that to “always.” That’s Magneto’s mind-set.

So back to Wanda. First question is: How did she get to Krakoa? Krakoans get there by walking through teleportation gates grown by the island itself, which don’t allow non-mutants passage. If you come by a more conventional route, the island’s extremely sophisticated sensors — both technological and biological — alert the nation’s defenders (of which there are many) to an intruder.

Since every alarm on the island didn’t go off, we must assume that Wanda walked through a gate. Which means she can use her reality-altering powers to fool Krakoa into thinking she’s a mutant. If she can fool Krakoa … can’t she also fool Cerebro?

So that’s my cunning deduction. Or is it an induction? Anyway, I think Magneto killed her, and now will try to use his power and authority — he’s on the ruling council of the island — to have Wanda resurrected by The Five. 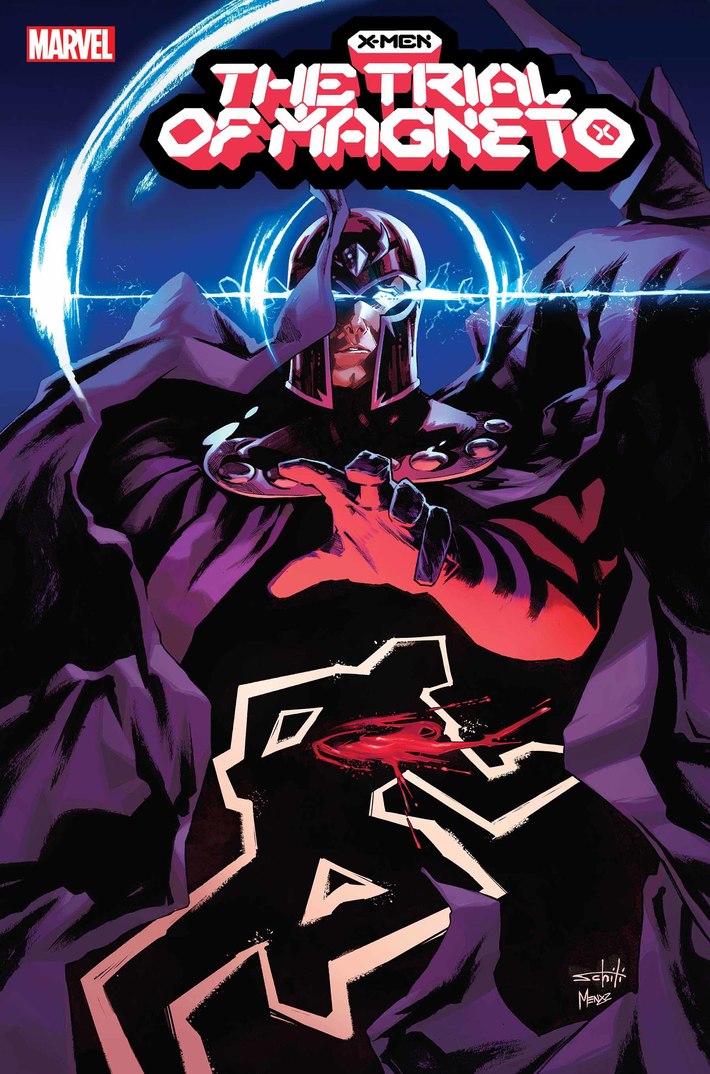 Marvel says The Trial of Magneto, which begins in August, will divide the mutant nation. I think we can guess why. (Cover art by Valerio Schiti, copyright Marvel Comics)

They do happen to have the foremost geneticist in the world on Krakoa, in the person of Nathaniel “Mr. Sinister” Essex. They have other mutant DNA experts, like Hank “Beast” McCoy and Dr. Nemesis. And “The Five” have already proven capable of modifying the bodies they grow, so they could probably mutant-ize a Wanda body to order.

There are two things that leap to mind here. One is: If Wanda is modified to be a mutant going forward, you may ask, “What about her brother Pietro, a.k.a. Quicksilver”? To which I will reply, “Who cares?” Honestly, he’s a jerk.

The other is: I could be wrong. Maybe that’s not Magneto’s plan. Maybe he didn’t even kill her. But right now it’s not looking good for ol’ bucket-head.

In summary, that’s my interpretation of Magneto’s “I will do what I must” line. I think he plans to kill off the old human Wanda and replace her with a mutant Wanda. And it might well be that Krakoa will go along with it (although that doesn’t seem very likely).

But even if they do … will Earth's human justice system? To, say, the Avengers, death is still death, murder is still murder, and Wanda is one of their own. I think they will “do what they must” as well.

Man, that's a party favor that keeps on giving!

It's interesting how these rights issues caused the comics' continuity to become so convoluted.  You know there's a parallel universe where this either never happened or got resolved a lot sooner and Kamala Khan and Doreen Green (among others) are mutants.

I think at one time we used to call comics conforming to the movies "the tail wagging the dog." But comics are such a tiny industry and Hollywood such a big one that not only are the movies and TV shows the cash cow, they are also what's making Natasha Romanoff and Groot household words. The comics are still the source of the IP, but are they really the dog?

My thoughts on this are only half-formed, but I'm re-examining my provincialism. Yes, the comics were first, but when a Black Widow comics title can't sustain 30,000 readers a month and a Black Widow movie makes $215M on its opening weekend, clearly the movies are doing something the comics aren't or can't. I can't just ignore that because I was reading about Black Widow in Tales of Suspense (1964) and didn't see her on screen until Iron Man 2 (2010).

It helps that Marvel Studios is really, really good at making comic book movies. I wouldn't be thinking about any of this if Black Widow was of the quality of Catwoman or Elektra movies.

As to the parallel universe you speak of, in my universe Quicksilver and the Scarlet Witch are Magneto's children (because of course they are), and Squirrel Girl and Ms. Marvel are mutants as well. Why bother with Inhumans, which is not only a failed comic book property (multiple times), but a failed TV one as well? And they live on the Moon, so Inhumans shouldn't be showing up on Earth anyway. Nobody's an Inhuman in my universe, unless they were born on Attilan -- and Inhumans are just an offshoot of mutant DNA anyway.

Obviously I am wrong, according to the comics. But I am old, and stuck in my ways.

It's interesting how these rights issues caused the comics' continuity to become so convoluted.  You know there's a parallel universe where this either never happened or got resolved a lot sooner and Kamala Khan and Doreen Green (among others) are mutants.

This is why I come up with timelines of my own, so I can accept the bits I like, and ignore the bits I don't.

That's a good point about the movies outselling the comics, I never really thought about it that way before.  I always thought of the movies as a sideshow to the comics, which they really aren't anymore.

If* we still had street newsstands and comic books on those newsstands and lower prices on those comic books, moviegoers might see the names of their heroes and buy those comics. Comic book stores saved the medium but they are preaching to the converted. Given the prices and the general non-returnable status of books, LCS owners and their customers are generally reluctant to try other genres and new titles. Some comic book store customers are introducing kids to comics, but I don't think many.

* the biggest word there is